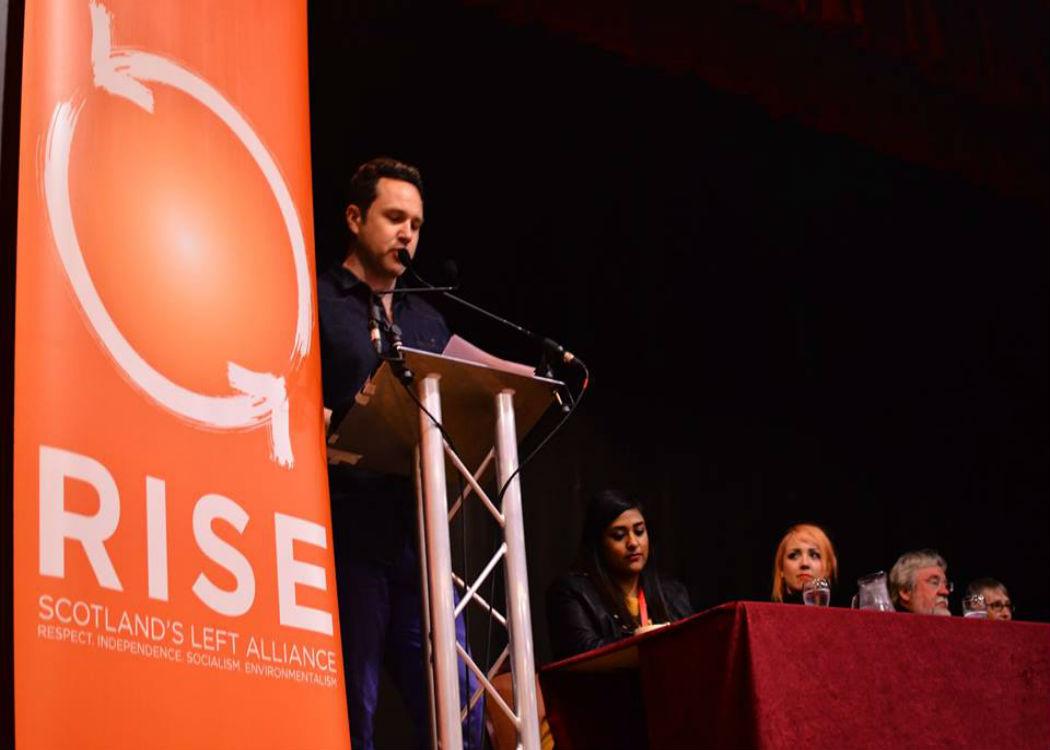 THE NEW left wing electoral alliance Rise will hold its policy conference tomorrow (4 December) in the Glasgow Royal Concert Hall to vote on a radical policy programme for the 2016 Scottish elections.

Organisers have received over 70 motions for the conference, but it is understood that some policies with significant backing include a PS10 minimum wage and PS100,000 per year maximum wage in the public sector, the scrapping of council tax to be replaced by a more redistributive Scottish Service Tax, the abolition of the unitary Police Scotland force, the legalisation of drugs and on-demand abortion.

Organisers are expecting around 300 Rise members from local party ‘circles’ to attend the conference, as well as a number of non-member observers.

“2016 will see a strong socialist challenge, and we believe many will be joining the likes of Jim Sillars in supporting our campaign.” Jonathon Shafi

Rise emerged from talks between the SSP and the Scottish Left Project, a body of socialist activists established after the Scottish independence referendum to pull together a unified socialist slate for the 2016 Scottish elections. The outfit held its founding conference in August .

The electoral coalition includes leading figures from the Radical Independence Campaign including Cat Boyd and Jonathon Shafi as well as SSP co-convenors Colin Fox and Sandra Webster. Candidates will be elected to stand for election through the proportional representation system in Scotland’s eight ‘list’ regions later in December.

Internal Rise structures will also be deliberated on at the conference.

Jonathon Shafi told CommonSpace: “As Rise activists from across Scotland prepare to gather for our first ever democratic conference tomorrow, we received over 70 motions and are at the final stages of arranging our policy platform and organisational capacity. 2016 will see a strong socialist challenge, and we believe many will be joining the likes of Jim Sillars in supporting our campaign.”

Another prospective Rise policy is to create a public welfare institution specifically designed to protect benefit claimants from sanctions. The body would give advice to claimants on how to claim the maximum of their welfare entitlements and provide grants to mitigate sanctions.

“I want there to be policies for people not the economic units other political parties treat us as.” Sandra Webster

The conference will also vote on whether to campaign on a policy of ending private schools in Scotland.

SSP co-convenor and disability rights activists Sandra Webster told CommonSpace: “I want there to be real policies that will help create a kinder, fairer society. The type of vision of Scotland we shared during the referendum campaign. Policies for people not the economic units other political parties treat us as. For me personally the need for a PS10 per hour wage for all is important. As a carer, I would like to see a living wage paid to unpaid carers and our role recognised.”

John Davidson, vice president of the PCS Scotland Committee who will be attending the conference as a representative of the south Glasgow circle told CommonSpace: “Rise needs to adopt a platform which makes it clear it is the natural home for trade unionists in 21st century Scotland. Rather than being a faction of a party competing for space, the workers movement should be synonymous with Rise and vice-versa as we aim to give a parliamentary voice to those in struggle.”

Sean Paul O’Conner, a 19 year old student and a member of the Inverclyde circle told CommonSpace: “I’d hope to see a policy which promotes the addition of solar panels on new build public housing. Saving our working class money whilst helping to save the planet.”

“Rise needs to adopt a platform which makes it clear it is the natural home for trade unionists in 21st century Scotland.” John Davidson

Rise will be standing exclusively in regional ‘list’ seats, where a proportional representation system means that small parties stand a chance of being elected. Veteran independence campaigner Jim Sillars has said he will give his regional vote to Rise .

Gordon Asher, an academic from the West of Scotland University, who is not a Rise member but attending as an observer, told CommonSpace: “I am attending as an observer – to see, listen and witness first hand -rather than relying on second hand reports or the media – especially with regard to the processes for deciding policies and electing candidates.”

Competition for regional seats is expected to be fierce, with Greens, Liberal Democrats, Labour, Conservatives, Rise and others all relying heavily on regional seats to gain representation due to apparent SNP domination of constituency support.