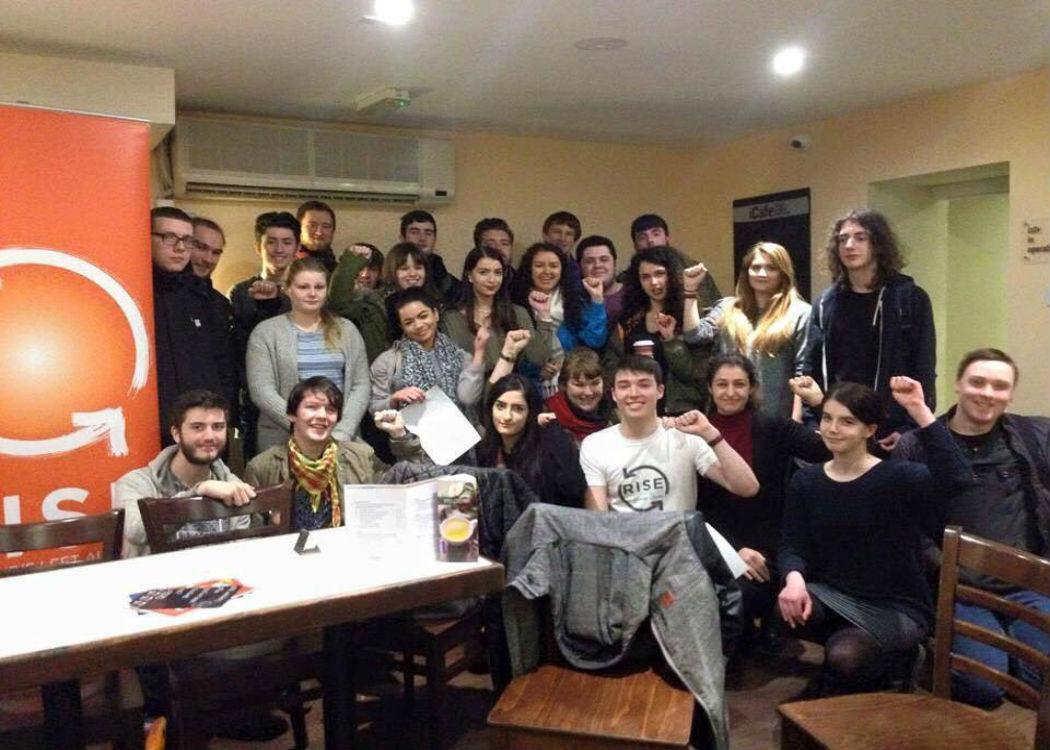 THE RISE leftwing alliance’s youth network has said it will engage in a direct action campaign to start bringing about societal changes that were argued for during the independence referendum.

Around 30 Rise youth activists held a simultaneous manifesto launching and drafting at Strathclyde University in Glasgow on Saturday 23 April in a bid, organisers said, to “do politics differently”.

Organisers said that they wanted to help foster a culture in Scotland where direct action against employers, landlords and politicians engaged in exploitative or harmful practices was “much more common”.

The activists have been involved in a series of stunts and protests in recent weeks, including taking demands for improved pay and conditions into fast-food chains, mimicking a successful protest movement in the US, and briefly occupying hotels owned by controversial US tycoon and presidential hopeful Donald Trump .

“The scheduled return to business as usual isn’t inevitable, and frankly we deserve better. We’ve lost our bottle in post-referendum Scotland. It’s time for the youth to be daring again.” Stella Rooney

One of the organisers of the event, 17 year-old Stella Rooney, told the gathering that young people were fawned over by the Yes campaign during the independence referendum, but that their voices and demands had subsequently been ignored.

She said: “Since the referendum, what has actually changed for young people in Scotland? The answer is very little. We’ve joined the SNP in our thousands, but this hasn’t actually translated to any real transfer of power.”

She criticised the SNP for what she said was the de-prioritisation of young people’s interests relative to the rich and powerful.

She said: “As the SNP cosy up to big bosses, impose regressive taxes on low incomes and fail to address the lack of affordable housing, young people are being disproportionately affected. The SNP have absorbed generation Yes and neglected to provide them with an effective platform for change.

“The scheduled return to business as usual isn’t inevitable, and frankly we deserve better. We’ve lost our bottle in post-referendum Scotland. it’s time for the youth to be daring again.”

Scottish rents have reached an all-time high in 2016 according to the Citylets letting agency.

She also said the pro-independence left should learn from other independence movements in Europe, and that the best way to pursue the independence cause was by arguing for radical political change: “In the Basque country, the independence movement is led largely by the youth. They’re not afraid to be radical in their socialism or their feminism or to dissent from the party line. They also recognise that politicians alone can’t save us. Change isn’t benevolently handed down from those in power.”

Key policies agreed by the meeting included a range of measures to deal with Scotland’s housing crisis, including rent controls and a massive council house building programme.

Matthew McDaid, who spent time on the 150,000 strong waiting list for a home in Scotland and had previously worked in construction for a Scottish local authority said: “In all the time I was there we never built a council house.”

Scottish rents have reached an all-time high in 2016 according to the Citylets letting agency.

The 2016 Scottish election, which takes place next week, will be the first Holyrood parliamentary election where 16 and 17 year olds will have the right to vote.