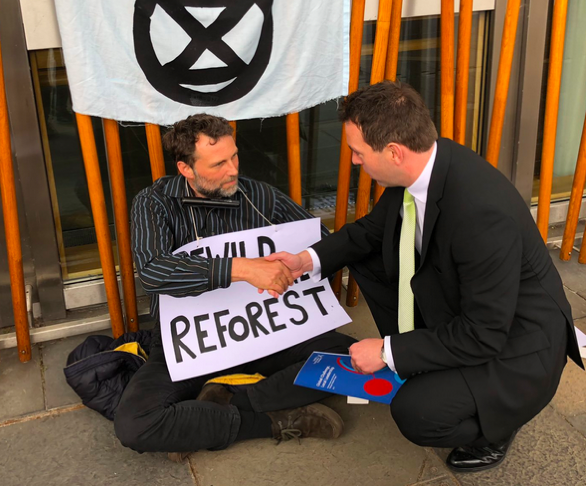 Robert Alcock, one of five Extinction Rebellion Scotland activists to lock themselves to the Scottish Parliament on Tuesday [4 June], writes an open letter to Scottish Conservative leader Ruth Davidson, who chose not to come in person to unlock him. Alcock asks Davidson to join him on the Climate Citizens’ Assembly, starting 20 June.

As you know, on Tuesday five Extinction Rebellion activists locked ourselves to the railings outside Parliament with bike locks, and sent the keys to five leading MSPs from the five parties at Holyrood, together with a covering letter which read: “This letter has arrived with a key, the key to our future. Please keep it: you will need to use it very soon.” This action was done with the hope of establishing dialogue about the climate emergency. My key, as it happened, was sent to you, with a tag attached marked “Rewild and Reforest.”

I was a bit disappointed that you didn’t come in person to unlock me, to show that you take the ecological crisis seriously. Maurice Golden, the Conservative spokesman for circular economy, who did come down, didn’t seem particularly keen to chat either. He spent less time talking to us than any of the other MSPs; though on the other hand, he was the only one to bring a glossy brochure.

To be honest, though, I wasn’t really sure, what I would have said to you if you’d appeared in person; nor did I think you’d be very eager to talk to me. I mean, there’s a widespread perception that climate activists and Conservatives are at opposite ends of the political spectrum, and therefore can’t have anything to say to each other. There was a certain amount of joking that I’d still be sitting there at midnight waiting for Ruth to come and unlock me! 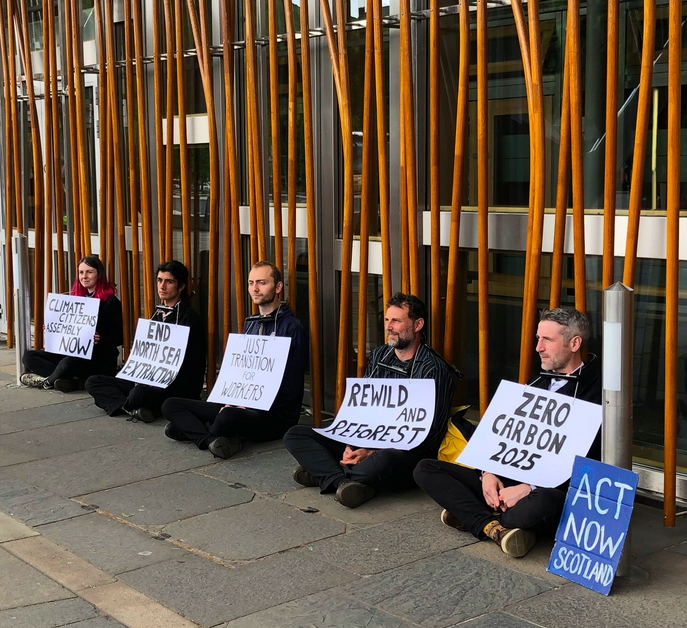 But however difficult it may be to find common ground, I believe it’s absolutely necessary to engage in dialogue across all manner of differences. All the more so when we’re faced with an global existential threat like climate breakdown. Like it or not, we really are all in the same leaky boat now—albeit the people in “steerage” have been sitting for years in the water that’s just now reaching the first class cabins.

I know there are plenty of people—both on the left and the right—who say we shouldn’t engage in dialogue with the “enemy” on the other side of the social and political barricades (mixing my metaphors!) that we’ve constructed. But I don’t see how political trench warfare is going to change anything. We need to meet in no-man’s land and talk it out.

I think we mostly all agree on the science now. At last we seem to have moved on after years of denial. Most people now accept that we are, in fact, in a state of emergency. We are in the midst of the sixth mass extinction, at risk of catastrophic climate breakdown unless we change our global behaviour in just a few years; and unlike the other mass extinctions in the history of the Earth, this one is caused by the activities of human beings, especially our growing use of fossil fuels.

The question now is how to find a different way forward, to do so urgently, and to do so in a way that works for the whole of society. And do that we desperately need dialogue between people who wouldn’t usually talk to one another, cutting across long-established divisions in society. So, I decided to write to you and try and find common ground.

I hear you have recently returned from maternity leave after the birth of your son, Finn. Congratulations! As a parent myself I know what a wonderful and humbling experience it is to welcome to the world a tiny human being, entirely dependent on you. All children need, more than anything else, love and security. Nearly all parents do their very best to provide them, and we all find that our efforts are never good enough. Never more so that when you are forced to admit that the very basis of life—that the Earth will continue to support life in the way it always has done— may be under threat.

Today my 13-year-old daughter was in tears because she had been taught in science class about ocean acidification: how increasing CO2 levels are causing the seas to become more acidic, killing fish and corals. She told me she doesn’t want to know about climate change. She just wants to have a normal childhood.

My only answer was to say that I am doing everything I can to help fix the problem so that we’ll have a planet that she can live on in the future. That I’m locking myself to Parliament and campaigning in other ways so that she doesn’t have to worry about it, and can just enjoy playing football, doing her piano practice, reading Harry Potter books and generally having a normal childhood.

I also told her that I firmly believe nature has the power to solve a lot of problems for us, as long as we can get out of her way instead of working against her. That’s why I chose to have the phrase “Rewild and Reforest” on on my key and on the sign I was holding.

I’m sure you know that Scotland has an enormous untapped capacity to absorb untold quantities of carbon from the atmosphere in her soils, her peat bogs, and above all, by regrowing the once-great Caledonian Forest that used to cover her uplands: uplands that are now managed primarily to maximise the population of herbivores like sheep, deer and grouse. Not by planting monocultures of sitka spruce, but by allowing (and where necessary, helping) nature to regenerate, restoring diverse ecosystems that can provide us with a wealth of different yields, tangible and intangible, instead of just one or two cash crops. But this can’t happen unless rural people—both landowners and the communities that depend on the land—can talk with the urban people who visit the land, and the people who make the laws, and work together to find out how to make that happen.

It’s going to be a few years before Finn learns about climate change in school. Let’s hope by the time he does, you’ll be able to tell him that things were looking really bad for a while back there, but thank heavens, we managed to turn the problem around.

But that’s not going to happen unless people can talk to each other across ideological divides. One way that has been suggested for doing this—and it’s one that we in Extinction Rebellion Scotland are promoting—is to create a Climate Citizens’ Assembly. This would be a body composed of randomly selected citizens, like the Citizens Assembly in Ireland that led to the historic abortion referendum not long ago. It would be a dedicated to finding solutions to the climate crisis, able to deliberate and consider policies that work for the whole of society without succumbing to party political divisions.

On 20 June a campaign for a Climate Citizens’ Assembly will be launched at Holyrood. You’ll find the declaration at the bottom of this letter together with an attached briefing paper. I’d like to ask you to support this campaign. It offers a way forward, a way we can overcome our ideological differences and work together.