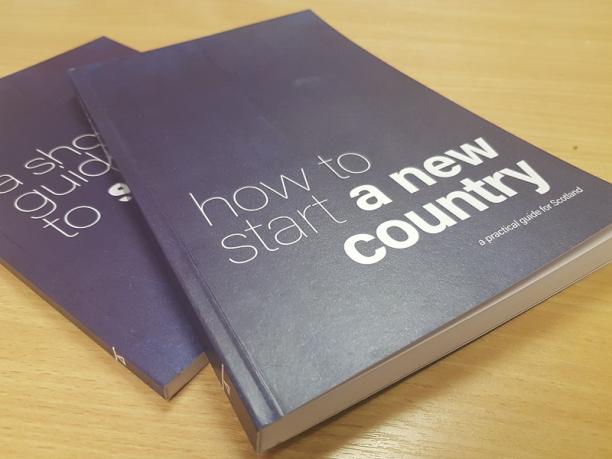 Robin Hall, Common Weal Aberdeen campaigner, reviews the Common Weal think-tank’s new book on How to Start a New Country, a plan for setting up an independent Scottish state, and argues it could not be more timely

ANYONE who is or was a supporter of Scottish Independence, or even just curious, should read the new Common Weal book “How to Start a New Country”. As we watch the calamitous negotiations surrounding Brexit it is clearly evident that being well prepared is essential.  This book could not come at a better time to educate and stimulate the conversation as to how Scotland can achieve independence.  As the Brexit vote has shown a referendum is not a just a vote, you need a plan afterwards. How to Start a New Country sets out this plan and how it can be implemented.

The book of course uses the policies set out in Common Weal’s White Paper Project. But this is essentially about the three years after the referendum vote and what needs to be set in place. Robin McAlpine writes in a way that is easy to read and understand but equally doesn’t under state the challenges ahead. If you dream about a radical new Scotland then this book is not about that. The time for dreaming will be later.

“If you dream about a radical new Scotland then this book is not about that. The time for dreaming will be later.”

It lays out an overview of what elements of government need to be in place as we progress towards independence, covering each topic in turn. This is a massive project and the concept of project management is discussed in the book, which may seem unusual. But given how some government departments currently manage their projects we need a different method to achieve independence. This project has no equivalent; it is not an AWPR or a Queensferry crossing.  There are aspects of the book where it is easy for the reader to be distracted by the complexity of the undertaking and range of options available. But choice and options is something that as citizens we should welcome. McAlpine does not try to pull the wool over the reader’s eyes in this respect.

Common Weal proposes that a National Commission be set up to manage the process preparing Scotland for independence. The idea is logical as the commission will separate delivering the wishes of the people from the partisan politics. Government needs to keep governing and there can be no excuses for not delivering during the transition. By separating the planning for independence from the current Scottish Government duties it will focus the minds of everyone. By utilising the skills from within Scotland the commission will operate in the interests of the people of Scotland. The Brexit negotiations have shown that many were left behind and still embittered by the result. This cannot happen after the independence vote. We need all people across the political spectrum to have faith and confidence that the transition will be managed.

“Common Weal proposes that a National Commission be set up to manage the process preparing Scotland for independence. The idea is logical as the commission will separate delivering the wishes of the people from the partisan politics.”

The size of the task described in the book is daunting as so much of our lives will change. But equally the book highlights exactly how Scotland is being failed by the UK. The fact that we will need to expand our civil service seems a fairly ordinary task in setting up a new country. Though the economic potential of these jobs should not be understated, which could be spread throughout Scotland? Imagine a Department of Energy being established in Aberdeen, utilising the skills and experience of the region and replacing some of the jobs which have been lost in the recent oil industry downturn.

The content and analysis of the book will appeal to all ages as we try to appeal to the broadest spectrum of voters. Those that are older and resistant to change can take comfort in the fact that much of the services that we currently enjoy like the Post Office and BBC will be retained in some form. Likewise if you are young and ambitious the opportunities for a new career will be aplenty without having to migrate south. How to Start a New County is equally optimistic as it is realistic.

“There are still questions which are not answered by the book. This is not because the author has shied from the questions it is because in some areas like international trade and the final cost, there are far too many unknowns at present.”

One of the topics discussed is the challenge of developing an IT system to pay our taxes, social security and pensions. Not something that would instantly be obvious when discussing independence. But as our lives are controlled and managed through data systems, it is important to get this right. Government IT projects are traditionally run by large multinational companies. Common Weal proposes that there is no reason, given our expertise, why Scottish companies could not undertake this work, another economic boost which would be in place well before Independence Day.

There are still questions which are not answered by the book. This is not because the author has shied from the questions it is because in some areas like international trade and the final cost, there are far too many unknowns at present. But the risks are spelled out in the book.

How to Start a New Country is a refreshing addition to the Independence debate. We live in uncertain times so a bit of clarity and planning is required. This book provides that.  We have had our dress rehearsal and need to be ready when the opportunity arises. Like all journeys it won’t be a straight road there will be some bumps and detours on the way, which the book addresses. We can dream of a new Scotland but we need to be able to deliver it, “How to Start a New Country” provides an informative insight as to where we are and how we can achieve that within 3 years.