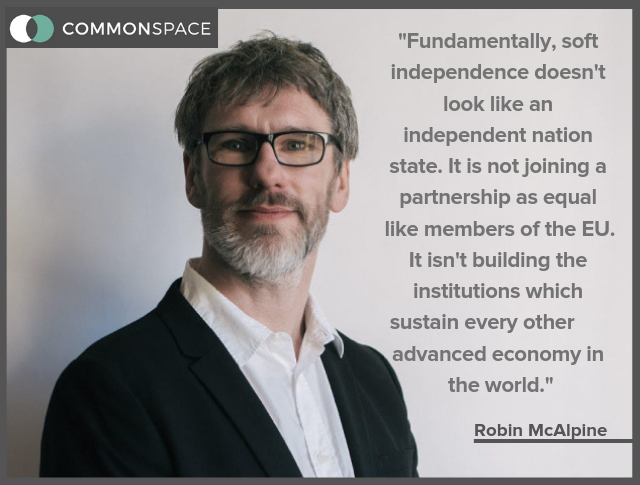 IT LOOKS like the last couple of voices still trying to sell the Growth Commission to the independence movement are determined to force us to make a clear decision – do we want independence or do we want Soft Independence?

While I of course recognise that advocates for Soft Independence (henceforth ‘Softies’) are entitled to set out their stall, I think that it is self-indulgent that they have failed to gain any support but continue to use a privileged platform to seek to split the movement.

I personally don’t know anyone who wants to be having this debate, but it seems we’re stuck with it. So can we get it over with? Here are 15 reasons why it’s time for the Softies to back off.

1. No-one in the movement wants this

The Softies could hold their AGM in a bathtub. No indy supporter wants this. Even independence supporters inclined to be cautious on the currency don’t intend this to mean ‘stay as British as we possibly can’. The tone of the Softies’ case is so far at odds with the identity of virtually the full independence movement that it feels like it came from a different world.

2. No-one outside the movement wants this

People who voted Yes last time are not going to be attracted by a weaker version this time. They’ll probably still vote for it, but they don’t want it. Gradualists will simply have their view reinforced by the rhetoric of softness; they won’t hear a case that changes their mind. Unionists don’t want any kind of independence. If everything is staying much the same, the No campaign ought to brand themselves Why Bother?

3. It fails to understand the psychology of voters

Anyone involved in the psychology of decision-making will tell you that there is an enormous gap between what you do to persuade someone to support ‘a bit more of what we’ve got’ and what you do to get them to support ‘something different’. The former requires gentle coaxing, the latter requires you to inspire confidence. You can sell incrementalism with Softness, but Scottish independence isn’t incrementalism.

4. It fails to listen to what winnable No voters are actually saying

There is an idea floating around that swithering No voters are asking us to become weaker, offer less independence. Well I’ve seen a lot of serious voter attitude research and this is not what they’re saying at all. Basically they’re saying ‘this is a leap of faith – so you need to persuade us you know what you’re doing and that this is good for us’. Becoming softer is the opposite message – that we don’t know what we’re doing and that the status quo is best for them.

5. It doesn’t solve our currency problem…

Softies are convinced that currency wasn’t really a problem for us in the 2014 referendum and that the same strategy again (just say ‘the Pound’ and don’t answer any questions) will work this time. But Sterlingisation is a wild and untried experimental policy used by no advanced economy in the world ever and the No campaign will crucify us on this.

Only a mainstream currency solution (our own currency or a formal currency union) can gives us a stable platform from which to argue our case, and only one of these is deliverable.

6. …because Sterlingisation is economic suicide

You’ve heard a fair bit from the Softies, but what you’ve not heard is a coherent answer to the primary question Common Weal has asked over and over. That question is ‘in the absence of monetary policy levers and with incredibly restricted fiscal powers, what would a Sterlingised Scotland do if there was a financial crisis in London?’.

We ask this question to highlight the reason no other advanced economy uses someone else’s currency informally – that you might just about bluff it (though with serious shortcomings) if everything stays utterly peachy in the world economy, but you’re entirely powerless if it doesn’t.

Just as a reminder; during the 2008/9 financial crisis the London money markets simply stopped lending Sterling altogether – and that would be Scotland’s only source of currency. Scotland’s economy would be utterly unprotected; we’d be torn apart.

7. Softness has a glaring internal contradiction

It claims there will be a ‘frictionless’ border with both England and Europe. Assuming Brexit happens, that isn’t possible. These multiple (and serious) errors reflect the contradiction at the heart of softness; you can’t be both ‘soft’ and ‘normal’. You’re either soft and weird or strong and normal.

The EU’s governing laws are called the Acquis communautaire. They state that you must have a currency and a central bank for three years before applying for membership. There is no loophole.

10. …because Softness is Weakness

The first sign of the weakness of a Softly Independent Scotland is that it would have no option but to impose austerity – because the London money markets would be in control of our monetary policy so they would dictate our fiscal policy. Remember, the Growth Commission’s formula would have forced the Scottish Government to cut public funding more severely than the Tories did in their most recent budget.

12. There’s no escape from weakness

Weakness is a trap – the longer you are weak, the harder it is to become strong. That’s why the Growth Commission is suggesting 15 years of Sterlingisation and at least a decade of austerity. Remember, you’re not even allowed to talk about your own currency until you meet tests which include having undergone a decade of austerity…

13. It greatly constrains democracy in an independent Scotland

If you wanted to sum up the Growth Commission in a sentence it would be “me and my friends will take it from here”. The ‘grunts’ of the independence movement are free to put in the hours to win our freedom but from that point on it’s the bankers and corporations in control.

The Growth Commission is predicated around a long-term set of rules which virtually define any future government’s economic policy. Large chunks of government would be run by unelected committees which would dictate policy to the government on behalf of the finance markets.

14. Add all this and more together and we lose

This list only begins to scratch the surface of the problems with Soft Independence – Common Weal has published tens of thousands of words of careful analysis (start here). Fundamentally, this doesn’t look like an independent nation state. It is not joining a partnership as an equal like members of the EU. It isn’t building the institutions which sustain every other advanced economy in the world.

It is faking proper independence and begging and borrowing our way through the mess. It’s structure is an invitation to corporations and financial speculators which sounds awfully like ‘Welcome to Soft Scotland – take what you want and leave’.

And here’s the thing – it doesn’t matter if I’m right about all of this, because I’m right enough that a wild and untried currency experiment (and all its consequences) is all we’ll talk about until polling day. Remember, the Softies think the positive benefits of independence won’t be felt until 25 years from now. Go and sell that on the doorsteps.

I don’t doubt Andrew Wilson’s commitment and he’s clearly put a lot of work into this. He was more than entitled to push this case (though having been commissioned to come up with proposals for the whole movement it behoved him to act on behalf of the mainstream of the movement).

The entire weight of his powerful lobbying and PR company was thrown behind the launch. He seemed to get endorsement from Nicola Sturgeon. There is no question his ideas got a fair crack of the whip.

But he failed to gain any support; there is no momentum at all behind the Softites. These proposals are dead. There is no chance they will become policy. Continuing to push them regardless is self indulgence and it is not in the interests of the cause of Scottish independence.

It’s time to move on, because the longer we’re stuck in the dead end that is The Non-Case for Soft Independence, the longer before we come up with a feasible case to put to the public. This daftness is only still on its feet because of the tenacity of Andrew Wilson and because the SNP machine seems intent on preventing blow-back on the party leader who commissioned it.

Independence isn’t about one person’s social circles or another person’s public image. We need a strong, unambiguous and unifying case for Scottish independence. Until the Growth Commission is taken off the table, that can’t happen.