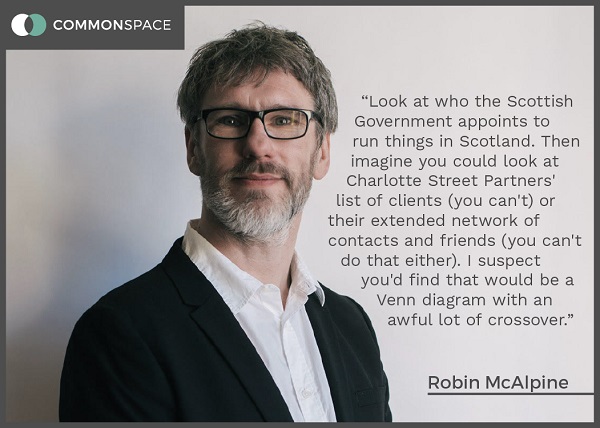 I HAPPENED to be in Brussels on the day the second tranche of the Panama Papers was released, attending a summit on the state of corporate lobbying in Europe.

About 20 of us met with the German Green MEP who had been behind much of the media coordination of their release and it became clear that views on what would happen next were divided into two camps.

One thought that this was a tipping point, that the abuses were so flagrant and so against the public interest that ‘something will happen now’.

The rich are not a group of people who live among us. They are a different caste, a different order of human, at times apparently almost a different species.

The other group expected a more familiar sight – the guilty either hiding or engaging in some distractionary self-flagellation until the whole thing blew over and they could get back on with it. I’m afraid I fell into the latter camp. And I’m afraid we were right.

The two parties who might – just might – have felt guilt about the state of affairs and who were in a position to do something were the EU and the UK. The UK did everything it could to do nothing. When the EU decided to do not very much, the UK used its influence to make sure that not very much was reduced to nothing.

And now we have the Paradise Papers. These don’t really tell us much that the Panama Papers didn’t. The rich are not a group of people who live among us. They are a different caste, a different order of human, at times apparently almost a different species.

And if they don’t initially get what they want, they spend more money to get it. Who believes José Manuel Barroso got his Goldman Sachs job because of his skills? Alternatively, who thinks it was a reward for running the EU on behalf of Goldman Sachs for years?

The concept of illegality is usually taken as a perquisite for a claim of corruption. So the corrupt simply corrupted the system so completely that their corruption is legal and therefore no longer corrupt.

Does anyone believe that the personal wealth accumulated by people like Bill and Hilary Clinton, Tony Blair and almost anyone in a senior post in the EU is not linked to rewards for loyalty to neoliberal capitalism?

OK, so what does this mean for Scotland? MSPs have repeatedly told transparency campaigners these things don’t happen here.

Yeah right. The stakes are lower so the corruption is lesser. But only a bit. And Scotland has the only parliament in Europe without a single person dedicated to monitoring corporate influence.

Common Weal does its best in coalition with the Electoral Reform Society and a couple of academics like Will Dinan from the University of the West of Scotland., and we coordinate with the people at Transparency International and Unlock Democracy as best as we can. But the truth is it isn’t nearly sufficient.

So what does this mean for Scotland? MSPs have repeatedly told transparency campaigners these things don’t happen here. Yeah right.

I know I write about this quite a lot (the link above and this here are probably particularly relevant) but that’s in part because there really aren’t many people who write or talk about lobbying in Scotland.

And if you think this is some kind of conspiracy theory, wake up. I have talked to I don’t know how many small and medium-sized businesses or social enterprises who have asked for Scottish Government assistance to be told that EU state aid laws make it illegal.

And yet, in an almost perfect circle, the Scottish Government gave £1.7m to KPMG (one of the worst culprits again revealed by the Paradise Papers for corrupting the tax system) to encourage them to set up in Glasgow.

But the real stick-in-the-throat factor is what they were setting up. It was a ‘tax planning’ office. We gave £1.7m of taxpayer money to tax-dodging specialists to set up an office to advise rich Scots on how to avoid paying tax in Scotland.

I wonder what KPMG were doing so right and all those smaller enterprises were doing so wrong? It couldn’t be the lobbying budget, could it? Or perhaps the revolving door? So long as you remember that it was legal, partly because the lobbying industry campaigns against regulation or transparency.

The Scottish Government gave £1.7m to KPMG (one of the worst culprits again revealed by the Paradise Papers for corrupting the tax system) to encourage them to set up in Glasgow.

So what do we do? On the Paradise Papers, there is a limit to what we can do in Scotland because the powers are reserved (or relate to UK dependencies over which only the UK has influence).

What we can do is make tax avoiders pariahs and hit them the only places they care about; their pockets and reputations. No company should get any Scottish contract if it is involved in aggressive tax avoidance. Pay your tax or forget a sniff of public money.

No individual caught tax avoiding should get anywhere near public appointments in Scotland. No job as quango head, no cushy position as a consultant, no influential role as a commissioner for this or that. Entirely excluded.

Then we need to look at the review clause in the lobbying transparency legislation. This is a pretty minimal piece of regulation and one of the few concessions us lobbying transparency campaigners managed to get was a promise to review it in a couple of years. It needs more teeth, and in particular it must include proper financial disclosure and extend the definition of lobbying.

But there is more. At the Scottish Independence Convention’s conference on Saturday Katherine Trebeck of Oxfam talked about what an economy more aligned with citizens’ values and hopes would look like.

We gave £1.7m of taxpayer money to tax-dodging specialists to set up an office to advise rich Scots on how to avoid paying tax in Scotland.

While she didn’t say it (Oxfam is constitutionally neutral), the implication for those listening is that if we want to make an economic pitch for independence which Scots actually want to listen to, it must be based on their values, not KPMG’s.

The promise of Scotland pursuing a ‘clean economy’ is a strong potential pitch for a future independence campaign. Clean as in non-polluting of course, but also clean as in not corrupt, not dirty, not rigged.

But is that what we’re promising just now? When Nicola Sturgeon wanted to produce an economic plan for independence who did she turn to? The head of the single most secretive lobbying company in Scotland.

It doesn’t matter that Andrew Wilson is a ‘good guy’ any more than it matters that Bono is a ‘good guy’ or Harvey Weinstein is a ‘bad guy’. They’re all up to their neck in a financial system which has rightly lost the trust of the people.

Look at who the Scottish Government appoints to run things in Scotland, particularly with a financial or economic aspect. Then imagine you could look at Charlotte Street Partners’ list of clients (you can’t) or their extended network of contacts and friends (you can’t do that either – power networks in Scotland are never examined).

When Nicola Sturgeon wanted to produce an economic plan for independence who did she turn to? The head of the single most secretive lobbying company in Scotland.

I suspect you’d find that would be a Venn diagram with an awful lot of crossover. Technically there’s nothing wrong with this. Or with who wins public procurement contracts. Or who gets Scottish Enterprise’s help and who doesn’t.

But here’s the thing. Jamie Hepburn can go on the radio to tell us all that awarding contracts to big ‘service companies’ (the Sercos and Atoses of this world) rather than voluntary organisations or social enterprises was all legal and above board.

In fact, ministers can go on telly literally dozens of times a year saying that something that looks to the public like blatant favouritism to big corporations with big lobbying budgets is no such thing.

And that’s fine because we all totally believe you. Our trust in politics is incredibly high and its just getting higher by the minute. Whatever you tell us, we accept. Nothing to see here. Eat your cereal.

Except we don’t. To us it looks like you’ve fallen into the same traps as all the other governments we know.

You want an economic pitch for independence that people want to hear? Tell them we’re going to red up this awful mess. Tell them institutional corruption has had its day here.

And so already the Paradise Papers are receding into the distance and things are returning to normal. Lord Whomever from Hedge Fund Whatever will get his next gig running some other part of Scotland’s public life. The world’s worst corporations will continue to thrive on Scottish public money. And politicians will keep telling you that you’re wrong to be suspicious.

The promise of a clean economy is a great sell for Scottish independence. You want an economic pitch for independence that people want to hear? Tell them we’re going to red up this awful mess. Tell them institutional corruption has had its day here.

And then, if you want them to believe us, tell the Scottish Government or the SNP to do its damnedest to not be on the telly again informing us that close ties with a corporation are totally above board and not the slightest bit dodgy.