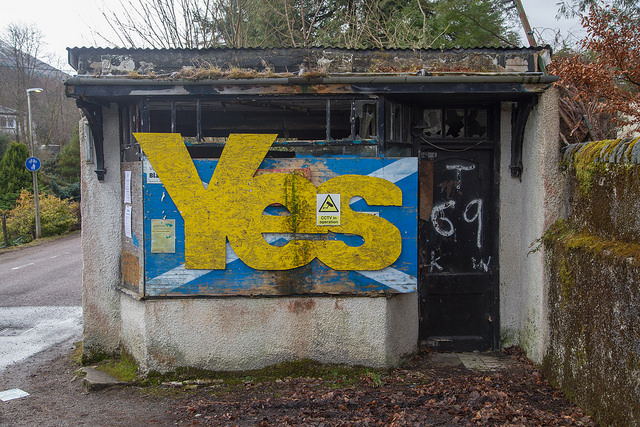 IN THE last few months I’ve been immersing myself in the positive case for independence; there really is a lot to be optimistic about. But let’s not kid ourselves on that we don’t face some problems as well, or that we can dodge them.

I’ve been thinking about this in part because of a conversation with the company which is working on the branding of the new national pro-independence campaign organisation (over £100k and rising folks).

They have had well over 5,000 responses to their questionnaire and it offers some valuable lessons on what the independence movement thinks are the challenges we face.

There are many issues, but I think there are probably three that jump out at me – because they particularly reflect my own interactions with voters whose minds could change one way or the other.

It is impossible not to feel two things simultaneously when I look at these. First, I look and I think ‘yes, that’s an issue and it’s certainly not something we can afford to duck or assume has a simple answer, but it is perfectly possible to tackle these head on and effectively’.

Then secondly I look and think ‘but tackling these needs serious work and there seems to be virtually nothing anyone can do to get any serious work on independence done by those currently in control’.

If you think any of these things matter and there is anyone you can complain to about the lack of action, please do.

There remains a confidence gap

I wrote a book two years ago in which I argued that the biggest reason we didn’t quite win in 2014 was that there was a confidence gap with voters. There were more than enough people who liked the tone and content of the case the independence movement made to have won comfortably.

But – crucially – just too many of them didn’t quite have the confidence in us that we really (and I mean really) knew how to deliver it. They looked in our eyes and, while they didn’t doubt our sincerity, they just noted that there were too many questions to which we couldn’t give a straight answer.

That’s why I keep arguing that the issue wasn’t really ‘currency’, the issue was that when we were asked a reasonable question about currency (‘what’s Plan B?’) we sounded unprepared.

Confidence is crucial in politics. For all the chat about how ‘it’s ideas that matter’, in reality we all still follow people and movements that exude confidence. And if it ever looks like the confidence is a bluff, it’s over.

You know this. You’ve been nearly hooked by a salesperson whose patter is great and then towards the end you ask a reasonable question and they just hesitate a little too long, start bluffing, can’t provide a satisfactory answer.

Any work they have done to convince you that you can make the purchase in confidence is undone. You know it’s true – you walk away. And you’re right to walk away.

Our problem remains that, ‘officially’, we haven’t developed an answer to a single question we didn’t answer well last time. I write ‘officially’ because Common Weal has done an enormous amount of work on this and there are good, solid answers to the questions.

But Common Weal is still whistling in the wind in terms of the ‘officially sanctioned’ case for independence. That is still a rambling mess of ‘because BREXIT!’ and ‘trust the leader’ and ‘we’ll tell you about that afterwards’. (Not including the ‘it’ll only be ten years of biting austerity’ pitch made by the Growth Commission.)

I bump into quite a lot of people who tell me that my obsession with the detail of how you start a new country is pointless. They think we should just put ‘£350 million’ (or equivalent) on the side of a bus or tell voters that their questions prove they don’t love Scotland enough.

It’s just that they’re dead wrong. I know I probably write this line at least once a month but we need a proper, well-planned prospectus for independence and we simply don’t have it. Worse than that, I can’t find anyone in a position of power who will even talk about starting a process to produce one.

Let me repeat this – we really don’t have (collectively agreed) answers to questions we are going to face a thousand times over in any referendum campaign. Failure to answer questions just screams ‘don’t trust me – I don’t know what I’m doing’.

If you think this is a small matter, you need to think again.

People are worried about the chaos factor

Yes Brexit looks like chaos. That’s because (a) Brexit really is chaos and (b) we never, ever stop reminding people that Brexit is chaos.

Those of us who have urged a little caution on this all-out assault on the ability to negotiate a ‘departure agreement’ with a political entity of which you are a member (given that this is precisely what we are trying to get the public to support) are entirely ignored.

We are actively talking up one of the biggest current voter barriers to independence – the ‘complication and harm’ of leaving ‘long-established political and economic unions’.

If you don’t know someone who has said to you ‘if this is the mess of Brexit, what would independence be like?’ then I’d suggest you’re living in a very small bubble. Our response to this is currently woeful – as in virtually non-existent.

There is a way to deal with it, but once again it involves work. And since I know that neither me calling for this work in an opinion piece nor me lobbying people is going to have any effect, I think we’ll (once again) just have to crack on and do it.

What we need is what the UK did not have – a well thought-through, properly tested Scotland Withdrawal Bill prepared in advance. In combination with a proper, thought-through plan for creating the processes and institutions needed by a new nation, it would constitute a proper plan. It would be ‘anti-chaos’.

So, once again and with insufficient resources, Common Weal will start the new year looking for constitutional experts, people with experience of drafting Bills and people with serious experience of negotiations. If you fall into any of these categories please get in touch – robin@common.scot.

Politicians aren’t viewed as the answer

It’s hard for me to admit out loud just how disillusioned I am with much of this Scottish Government (when they started reading out corporate press releases to reject utterly steps towards a publicly-owner railway, I start to ask myself what the hell I’m supposed to be voting for).

And yet even I find some of the criticisms of Holyrood deeply unfair. ‘Filled with muppets’ is no more true of that parliament than of any other parliament I’ve ever seen, and yet that’s what a lot of our target voters think.

A recent poll run by a pro-indy organisation aimed to show overwhelming support for Holyrood. It didn’t even find half of the respondents expressing a positive view. Our very loyal (sometimes too loyal) movement often fails to see this.

It is a fairly universal truth that politicians come to believe that they personally are the solution; ‘vote for me first because only then can good things happen’. That’s why politics has become so personalised, so ‘don’t ask questions, look at this life-sized cardboard cutout of me’.

In fact, politicians have a tendency to want to sideline people who challenge the notion that they are the answer. In Scotland just now we have a very, very small political elite which reaches out not very far at all.

The idea of starting a country afresh is a remarkably person-centred question for a lot of voters. They want to look up and know that there is a team of people capable of doing the many hard tasks required. That’s not what they see. They see a tiny political clique and they don’t love it.

If we really want to win independence we need to do it with a big, wide and impressive team, a team containing more than career politicians.

So far the talk of ‘Team Scotland’ has been lip service. One finding that came back from the survey (and this is of the independence movement) is that 96 per cent of people want the SNP and the Scottish Government to put the cause of Scottish independence ahead of party self interest.

It’s not just that this would be a good idea – it is utterly crucial.