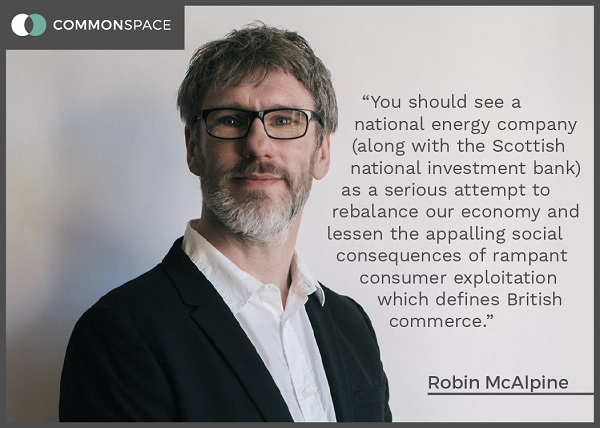 THERE are two ways you can look at the proposal for a national energy company. You could see it as a populist stunt, a sort of electoral bribe in which voters get the promise of cheaper electricity and gas. But you shouldn’t.

Rather, you should see a national energy company (along with the Scottish national investment bank) as a serious attempt to rebalance our economy and lessen the appalling social consequences of rampant consumer exploitation which defines British commerce.

The idea of ‘national companies’ is one Common Weal pushed quite hard in its Book of Ideas. The theory behind them is quite simple.

At the moment our economy is absolutely dominated by the myth of ‘consumer as policy maker’. This myth is that the many deregulations, privatisations and policy changes (almost all to the substantial benefit of big business) were really driven by you, the consumer.

It was you-the-consumer who wanted the mass proliferation of lightly-regulated gambling all over British society, and had nothing to do with intensive lobbying of the Blair government by the gambling industry.

It was you-the-consumer who demanded poverty wages in the food service industry because you wanted pennies off your burger. The corporate lobbying behind this was all for you – the enormous profits of these corporations is incidental.

It was you-the-consumer who chose the mortgages you could never afford to repay (the so-called ‘ninja loans’). The fact that you didn’t know you wanted them until someone phoned you up and made them sound too good to be true is just capitalism.

The point here is that consumers do not set policy – they choose between what is offered to them, largely on the basis of very sophisticated and very expensive advertising and marketing strategies.

And then politicians have a gun held to their head being told that ‘consumers won’t accept it’ to any piece of regulation or policy the big corporates don’t like. If you’ve been in social policy lobbying for even a couple of weeks, you’ll have heard this argument.

That is the point of neoliberal capitalism – corporations are set up as a direct challenge to the authority of government. Government has its voters but corporations have their customers, so democratic legitimacy becomes only one form of legitimacy.

Scotland doesn’t have the power to do anything much about this directly – it has little or no business regulatory power. Yes we could have done a lot more through other policies like planning and procurement, but there was always a limit.

So if big corporations are in fact using their economic power to change markets, what can be done? One powerful option is to use publicly-owned companies to change markets in the other direction.

Let me use the example of one of our other proposals for a national company – a national housing company. This would design and construct top-quality public rental housing which would be planned by local authorities and entirely managed by resident cooperatives.

A national company is a collective decision to have a public interest intervention in a major aspect of public life – housing or banking or transport or energy.

Last week I wrote about the problem of rising house prices. The best policy intervention isn’t to regulate down the price of houses (though this is a practice used in Germany to great effect) but to increase the supply of high-quality, low-cost housing.

The idea that the market is ‘solving’ this problem is utterly laughable – the market is the problem. So if the market is failing citizens for the benefit of wealthy developers and landowners, let’s change the market.

Build better and offer it at fairer prices – they don’t need to be subsidised, just have land purchase, build technology and financing models properly designed – and then let the market decide. If people still want to over-pay to live in poorly-built hamster cages in blandly designed and landscaped housing estates with no infrastructure built in, they can.

If they want generous, well-designed housing built with community facilities and attractive landscaping on long-term secure rental terms, they can choose that. If they’re undecided, we could point out that controlling house price inflation is now a national priority so houses shouldn’t be thought of as easy investment opportunities any more.

So I suppose you could see a national housing company as a populist intervention to give poorer people nice homes so they’ll vote for you. But that is not what they’re for; they’re a market intervention to influence policy and practice in markets that even Ruth Davidson accepts aren’t working fairly.

A national company is a collective decision to have a public interest intervention in a major aspect of public life (housing or banking or transport or energy) because a majority of the public through a democratic election have supported that intervention.

They are perfectly legal (with a bit of effort put in to avoid EU competition rules) and perfectly workable – and again and again and again we have seen evidence of overwhelming public support for these kinds of interventions. Even the rightwing business press has finally realised that both nationalisation and price controls have become the settled will of the British public.

That’s why the political right is so bothered by the proposal for an energy company (this piece by Brian Monteith seems to exist somewhere in a timewarp where people actually believe that the market solves monopoly abuse through price switching websites…). They are bothered because they know they can work, and be popular.

(Incidentally, one of the things I’m quite open to is a different kind of ‘nationalisation’. We called it ‘national mutuals’ and they would be publicly-owned companies, but owned directly by citizens who would all be given one non-tradable share so they could vote at the AGMs of national companies, giving people an active involvement and interest in these companies.)

That’s why the political right is so bothered by the proposal for an energy company. They are bothered because they know they can work, and be popular.

So what can we do here? First, we need to get the two ‘national companies’ which are on the books to work properly. This I can’t stress enough – if the energy company and the investment bank fail, it will undermine the rest.

We need a proper vision for what this bank is and can do and it must be built with that vision and a clear sense of purpose. I’ll admit to some concern that at the moment that is not what I hear is happening. I have nothing against the person who has been chosen to lead this development but from what I’ve been told there are substantial concerns that he’s the right choice.

The energy company must be ambitious in set-up. I hope the government begins with early talks with Our Power, the brilliant Scottish company already offering non-profit energy to Scottish houses. I wonder if Our Power might be a good starting point for the energy company.

But energy retail is not enough – the energy company must immediately and progressively begin to bring energy generation into public hands, too, so we have an integrated system. All those windfarms should belong to us, and be making us wealthy. They are close to being a public monopoly.

I would then set up both a Scottish national infrastructure company (we have a detailed proposal to manage public infrastructure (a kind of upgraded Scottish Futures Trust) and a National housing company to tackle housing.

That provides a good backbone. Next, I’d be exploring our proposals for a network of regional mutual development banks, focused on safe and boring banking for households and providing long-term support to small businesses through partnership lending.

These would be established and coordinated by the national investment bank but locally managed. They would provide stability in the market for small business and households which require only normal banking services.

And we’ll soon be publishing a report commissioned from us by the TSSA trade union on taking rail back into public ownership. A national transport company would be an obvious next step.

Broadband rollout in Scotland hasn’t exactly been a roaring success – certainly not if you live in a rural area. What about a national broadband company delivering modern digital phone lines (and eventually a Scottish digital TV channel) as well?

My personal pet project just now is thinking about a network of public ‘open access’ supermarkets, kind of permanent indoor ‘farmers markets’ where producers can sell directly to customers with only running and management costs being taken off at the tills. I’m hoping to write something on this soon.

My point is this; why won’t the market allow for those of us who want to choose a non-profit, pubic-good option?

I’m not suggesting we end market economics. I’m not suggesting that private providers wouldn’t be free to compete with these companies. In some cases the private sector would be the only ones offering specialism. And there are people who may like permanently switching their energy supplier to take serial advantage of introductory teaser rates.

My point is this; why won’t the market allow for those of us who want to choose a non-profit, pubic-good option which perhaps doesn’t have the cheapest teaser rates but which, over five years, gives us the most secure, stable and lowest cost option for people who don’t want to spend hours a month checking and shifting all their suppliers?

The answer is actually fairly simple; the corporates don’t really want you to have ‘free choice’ at all. They want to make you choose between them so they control not only you and your cash but also the market as a whole and, by extension, have enormous influence over the policy and regulation of those markets.

National companies are our opportunity to choose something else.