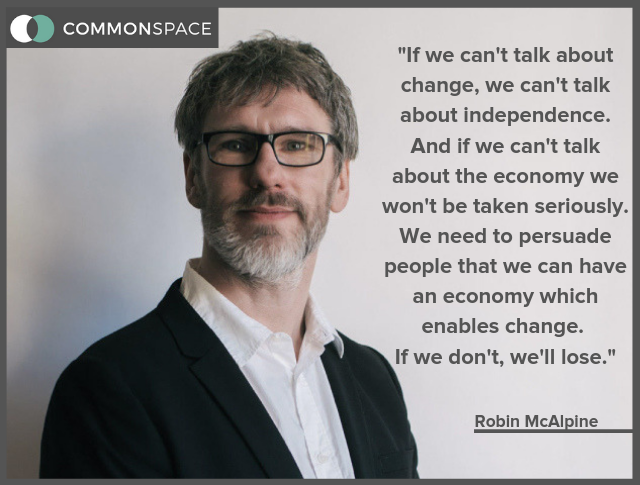 Common Weal Director Robin McAlpine introduces a new policy paper on an investment-led economy, which would offer the security, stability and sufficiency needed to persuade people of change.

The future is often the realisation of the stories we tell ourselves today; tell a confident story and you have more chance of living in a confident future. The report Common Weal has launched today is our confident story about a post-independence Scottish economy.

That’s because of the volume of information which strongly suggests that we simply can’t take the ‘risk’ out of independence in the minds of the 20 per cent of voters we need to target. They can’t be persuaded its just an administrative transition – and to be fair that’s because it isn’t.

So unless we can make the ‘reward’ seem worth the risk to them, they’ll stick with what they know. Why wouldn’t they? ‘Take a risk to stay the same’ just doesn’t make much sense.

That’s where our report begins. It starts by explaining what we should hope for from an economy, setting out clear principles for how to know if an economy is doing what it should.

But our economy is not doing what it should (if in doubt we’ve included an entire chapter dedicated to facts and figures which show just how poorly the UK economy is actually performing). To persuade people of change, we need to explain to them not just that things aren’t working, but WHY they’re not working.

This is important, and I think we’ve been getting it wrong. There seems to be a hesitance about clearly explaining why the UK economy fails Scotland – we seem remarkably willing to see the UK economy as benign and just to argue we could do it a bit better. I think it stems from a kind of conventionality, an unwillingness to diverge from the centrist consensus of British politics.

The reason this is bad for Scotland is that most of the sectors of the economy which benefit from policies that favour short-term profit are owned, based or headquartered in London. When they grow, London grows.

Unfortunately, if you live in a nation or a region which does not have these industries you get very little out of UK economic strategy. Those areas benefit from productivity, not asset value inflation. And it is this which makes the UK economy the most regionally unequal in Europe.

There are a number of indicators of this in the report, but the most striking is the proportion of national wealth that London hoards. All capital cities have higher than average GDP per capita (i.e. they all have more wealth per person than the average for the country as a whole).

If you want to know why ‘everywhere but London’ does badly out of the UK, it’s because London keeps £5 per person for every £1 the rest of us get.

If you want to know why ‘everywhere but London’ does badly out of the UK, it’s because London keeps £5 per person for every £1 the rest of us get. That is two and a half times more wealth concentration than anywhere else in Europe.

London is ‘stealing’ what would have been Scotland’s wealth – if Scotland had been a part of any other European nation. (If this is riling you up, just be glad you’re not South Wales or North East England.)

However, this is not just moaning at London; this is to explain the basis of how Scotland transforms itself. Because one of the impacts of the ‘grow London’ strategy is that it disincentivises long-term investment. After all, if you can make a profit in a day by owning London property or trading on the London stock market, why take a long term gamble?

Well, there’s a very good reason in Scotland. We can’t build a strong, sustainable economy on the basis of what London does, because Scotland’s assets are quite different from London’s. (And if you’re about to say ‘but we’ve got a big financial sector’, it’s worth noting that we have seven per cent of the UK’s financial industries, which is below our basic population share…)

Scotland’s assets are a highly-skilled workforce, enviable natural resources, an advantageous geostrategic location, powerful drivers of innovation in our universities and a strong political consensus to support change.

The potential of these assets isn’t unlocked by rapidly growing profit; it is unlocked by investing in them. For Scotland to flourish it needs an investment-led economic development strategy. The word ‘development’ is important, because here it is used specifically to mean ‘get better’, not just get bigger.

What would we invest in? The report examines 18 modern economic theories or bodies of practice to explore where the opportunities lie. There isn’t space here to look at all of them, but here are a few examples.

We need to invest in production in areas like food, construction materials, the hardware of energy generation, the roll-out of 5G. In any industry sector where Scotland has a competitive advantage we need to work out how we can capture more of those economies in Scotland, for Scotland.

Every time we substitute an import with something we can produce ourselves, we create wealth and jobs. A big part of our next ‘industrial revolution’ will be a lot of smaller producers making the things we consume.

We need to use the process of starting a new, independent country as a major Keynsian boost to our economy and plan it carefully for maximum impact.

Scotland doesn’t get the best out of its creative industries, in large part because of how much of the arts investment goes to London. We can do much more. The development of our energy system is suppressed because of the way the UK sets prices in the energy market. It actively damages the development of Scotland’s dispersed renewable industry.

If we got the ‘foundational economy’ right (that’s the thing that underpin the economy like transport, communication, education, energy and housing) and we succeeded in getting the investment into the kinds of examples given above, we will rebuild the economy Scotland should already have. It is a higher wage economy and it will bring many new jobs.

So what do we actually need to do? We need an ‘entrepreneurial state’, not standing by and congratulating the winners but rolling up its sleeves and helping to shape things for the better. That needs an industrial strategy, and the report discusses the many elements which should make that up.

We need to very greatly increase how much of Scotland’s economy is owned in Scotland (the UK is the world’s most foreign-owned country). We need a new system of industrial democracy so employees are partners in a business, not just consumables (as the UK’s hire-and-fire economy treats us).

We need to use public housebuilding, public procurement and collective ownership. We need economic diversification with an expansion of social, cooperative and employee-owned enterprises.

We need a government which does not cut spending at precisely the time we need to maximise investment. We need an expansionist public sector which is investing in infrastructure for the long term. We need to use the process of starting a new, independent country as a major Keynsian boost to our economy and plan it carefully for maximum impact. And we need to put the Scottish National Investment Bank at the heart of all of this.

Read more: The Green New Deal and the Growth Commission are from different planets. Literally.

But to be able to do these things we need our own currency – and we need (as far as possible) to make sure that our national debt is held in that currency. We need a central bank and tax reform to even the playing field so Scottish businesses can fairly compete with multinationals and banking regulation which removes the risk out of too-big-to-fail.

An investment-led economy offers hope. It offers what people want – security, stability and sufficiency. It offers them respect in the economy and public services which improve their lives. And it is the only chance we have to create the kind of regenerative economy the world needs to avoid run-away climate change. Investment is right at the heart of the Green New Deal.

Have the courage to believe that Scotland can be better if it wants to be, that it won’t be easy but that we can do it with hard work, courage and vision. That’s what I believe. That’s the story about our future which I want to realise. That’s where I want to live. I hope to see you there – soon.