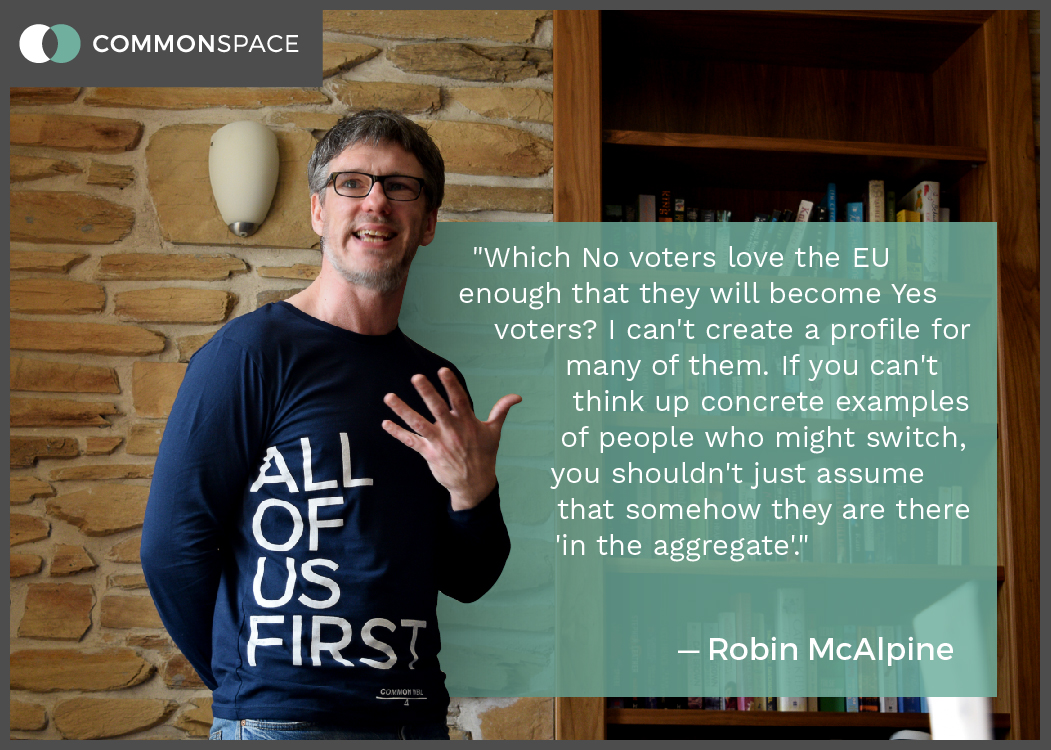 SO, the opinion polls don't seem to show a significant rise in support for independence post-Brexit. Why? What's going on?

I must admit that this hasn't surprised me at all – I had a number of debates with people before and after the poll in which I said I was very sceptical there would be a substantial shift in indy voting intentions as a result of Brexit.

It is very unwise to deal with the population in terms of averages and aggregation – these tell you little or nothing about how an individual will behave.

But it is very unwise to deal with the population in terms of averages and aggregation – these tell you little or nothing about how an individual will behave. When you walk through the issues in more detail, I think the picture looks quite different.

For a start, I'm sceptical that the framing of Scotland as wildly EU-rophile is correct. One in three Scots voted to leave the EU. I have met dozens of people who have told me that they voted remain but primarily for tactical reasons (to get another indyref). Quite a few said they'd have voted to leave if Scotland was independent.

Another bunch weren't voting tactically, but were heavily influenced in voting Remain not because they loved the EU but because they saw it as some degree of protection from a Westminster they trusted less. Another bunch voted to remain through gritted teeth (me among them), happy with neither outcome.

There is a dearth of decent attitude data in Scotland, so on far too much we're left guessing. But my guess is that by the time you include the tactical voters and the very reluctant, you're getting much closer to something like 50/50. When you include those who didn't vote in the EUref (but did vote in the indyref), I think you'll find that a minority of the indyref-voting population voted positively for the EU.

Of those that did, how many were really, genuinely enthusiastic? Voting is a binary practice which doesn't tell you about motivation. I'm guessing that 'do you like custard?' would get a slightly more positive vote than the EUref (most people like custard). But what does that mean behaviourally? How many people really make custard these days? How many people go out of their way to order custard? Liking something and doing anything about it are quite different.

For a start, I'm sceptical that the framing of Scotland as wildly EU-rophile is correct. One in three Scots voted to leave the EU.

So are there enough people who feel strongly enough about EU membership that they will act on their disappointment? Obviously there are quite a lot of Remain voters who were already Yes voters so they can't shift to Yes (and there are a lot of Leave voters who were also Yes and who are feeling ignored, but that's another story). And of course there are Leave voters among No voters so they won't shift either.

Who, therefore, might be in the intersection in a Venn diagram made up of three circles – No voters, Remain voters and those who feel their Remain vote substantially stronger than their No vote.

My instincts from the beginning have been 'not that many'. I have argued that a lot of people who feel most strongly about the EU do so because they see it as an alternative to nationalism, something higher and better than nationalism which they see as grubby and sort of beneath them. It seems unlikely they will embrace an independence movement as a result.

So which No voters love the EU enough that they will become Yes voters? I can't create a profile for many of them. If you can't think up concrete examples of people who might switch, you shouldn't just assume that somehow they are there 'in the aggregate'.

But what about the risk argument? I've heard people who believe that the generally increased sense of risk that will result from a Brexit vote will make people less risk averse when it comes to making a constitutional choice – against a risky Britain, an indy vote looks more attractive.

I have met dozens of people who have told me that they voted remain for tactical reasons (to get another indyref). Quite a few said they'd have voted to leave if Scotland was independent.

I'd argue that this is to misunderstand risk. Risk is perhaps the single area in which humans are least rational – cognitive bias (i.e. 'faulty thinking') dominates. In reality, during periods of higher general risk people actually become more risk averse, not less. (The primordial brain says 'I'm in trouble – do anything not to make it worse'.)

And the only category for whom this isn't true is the 'nothing left to lose' category – the poorest and most vulnerable in society who are generally least likely to be pro-EU and most likely already to be Yessers.

When faced with a broad, generalised sense of vague risk which doesn't seem that likely to impact on us directly or immediately, we might worry, but we don't generally do anything.

So how many people do you think in Scotland feel in serious risk of losing their job because of Brexit? Now subtract Yes voters, Leave voters, strong No voters and those who aren't totally convinced that independence will save their job. That is the group which might act out of risk. I think it is small.

Finally, there are people whom I've heard argue that Brexit is a fatal blow to the unionist case and so it negates weaknesses in the case for independence. This is wrong in every way – weakness is weakness and the fact that your opponent got a little weaker does not mean you got any stronger. The vast majority of attacks on Scottish independence that worked before Brexit still work afterwards.

I sat down long before the EUref vote to work through this stuff in my head; I just couldn't find anything like as many people whom I thought would behave the way everyone else seemed to think they would behave. I've hardly disguised my feeling that the EU referendum was a pretty shaky base from which to build a new independence campaign.

I can't help feel that the 'new front' is at best exaggerated and that the scepticism seems to have been empirically correct. Really wanting something to be true is a dangerous pastime.

So what exactly is going on? I'm not yet ready to voice my opinions on this because I don't know if people are yet in a place where they want to hear them. But I am content to state the following – we're so desperate to believe there is a shortcut we're grasping at any straw that comes our way (and a small minority seem so desperately in love with the EU that they think it really is the single big defining issue of our era, which in Scotland it just isn't).

Some people have had a dig at me for not getting on board with this exciting brave new front in the battle for independence. Others are disappointed that I've been sceptical. I can't help feel that the 'new front' is at best exaggerated and that the scepticism seems to have been empirically correct. Really wanting something to be true is a dangerous pastime.

I will apologise for being a broken record about this but Scottish independence will, like a rainbow, constantly remain just out of reach for so long as we keep believing we'll get there through luck and shortcuts.

I'm not pessimistic – I haven't changed my view that a strong majority for independence can be created over the next few years. But I am becoming impatient with anecdotes like 'JK Rowling sent out a tweet' or 'Nicholas McPherson wrote a column' passing themselves off as strategy.

Brexit isn't a magic button. I know this because there is no such thing as a magic button – and because the only thing clearer than the dogmatism that the polls would definitely swing dramatically to indy is the crashing failure of them to do any such thing.

So, are we doomed to keep chasing up any blind alley that we see in front of us, to grasp at anything shiny that briefly dangles in front of our faces? Are we going to end up like some millennialist cult waiting for a sign from God that its time for indyref two?

Or are we finally going to knuckle down and develop a coherent strategy?