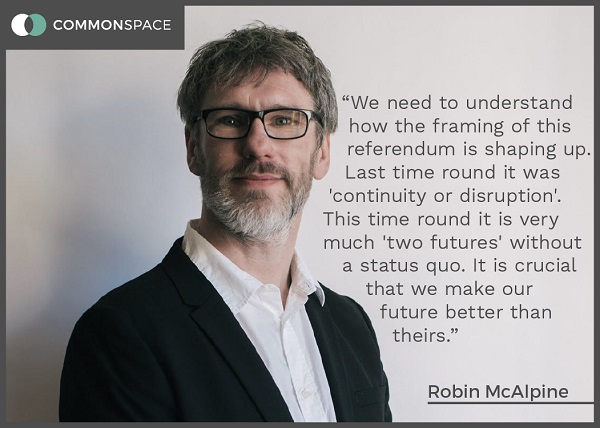 IF WE listen carefully to the noises coming out of the pro-UK camp just now, there is reason to believe that independence campaigners may have to recalibrate our thinking a little.

In particular, when I first heard the name ‘New Direction’ mentioned as a possible title for the No campaign, I became aware that some of my expectations might not be quite right.

I take as a starting point that in Scotland, Brexit is little loved – even if it isn’t hated as much as some initially believed. And certainly there seems to me a pretty strong sense that in Scotland Brexit looks particularly chaotic.

You simply can’t make Brexit disappear – which leaves you with the sole option of trying to own it as a positive.

I’d therefore been slightly assuming that the No campaign would try and massage Brexit out of the picture as much as they thought they could get away with.

Mostly I was expecting a kind of gentle, slightly backwards-looking tone to the No campaign – paternal, reassuring, safe, sensible. I expected it to drift towards the kind of comforting haze of ‘bunting and cupcakes and orderly queuing’ kind of Britishness while trying hard to drag it away from the ‘inefficient lightbulbs, dodgy foreigners and hanging people by the neck until dead’ stuff that seems to be brewing in parts of England.

That campaign would have been rather like Better Together, which frankly was a bit British Empire 1.0. However, you wouldn’t call that campaign ‘New Direction’. (Not that I’m convinced you’d want to call ANY campaign New Direction.)

That title hints strongly towards a campaign much more heavily based around British Empire 2.0. My initial reaction was a bit of surprise given that I think it’s a fairly hard sell in Scotland – at least from where we are now.

But there are two bases on which this does make sense. I’m assuming there’s been focus group work and two things have come out. First, you simply can’t make Brexit disappear – which leaves you with the sole option of trying to own it as a positive.

Many of you will think this sounds silly, but what option does the No campaign have? No-one now thinks we’re not leaving the EU, so this is precisely what they have to sell.

That won’t be easy for a Scottish audience, but it’s not impossible. Somehow you have to take out the ‘Boris Johnson’ factor (the very southern Englishness of Empire 2.0) and probably tone down the rank amorality (a new direction in which all our allies are vicious dictators seems another hard sell to me).

Angry immigration-inflected Brexit is a problem as well. But May has been shrewd in appearing to be planning to enshrine all the social and environmental protections of the EU in national law (for a few years at least). Pretending Brexit isn’t anti-progressive is crucial.

It’s still a far from easy job, not least of which is because the very idea of Britain having anything that looks like an ’empire’ in the 21st century is just silly. But there looks to be money going into this – the ‘These Islands’ think tank will presumably be looking hard at how to feed the Scots Brexit Britain.

The second reason it makes some sense is that I suspect they’ve discovered that in Scotland there remains a strong strand of optimism. I think ‘cling to what you have’ is a declining sales pitch. Whatever else New Direction is, it appears to be a recognition that the union has to seem dynamic.

So can it work? I described this to someone this week and they looked slightly incredulous and asked ‘what, they think they can manufacture Sexy Brexit?’.

If they can get their underpinning dog-whistle fear-and-smear campaign to work and people are worried into being afraid of independence, they may only need to ‘sex up’ Brexit enough to get by.

Many of you will think this sounds silly, but what option does the No campaign have? No-one now thinks we’re not leaving the EU, so this is precisely what they have to sell.

And I’d be inclined to take some care in not immediately dismissing this as a losing strategy. If they can get their underpinning dog-whistle fear-and-smear campaign to work and people are worried into being afraid of independence, they may only need to ‘sex up’ Brexit enough to get by.

This has a number of potential consequences for the Yes campaign. I’ve always argued that a ‘safety first’ pro-independence campaign was a mistake for reasons I’ve elaborated on at some length.

But that would probably be an even worse strategy if we have to go against a campaign that is trying to present a dynamic, change-based story. People are simply not voting for stasis these days.

We need to understand how the framing of this referendum is shaping up. Last time round it was ‘continuity or disruption’. This time round it is very much ‘two futures’ without a status quo. It is crucial that we make our future better than theirs.

I’m an awful long way short of being convinced that Sexy Brexit can win in Scotland. But it would be a catastrophe if we tried to fight it with a tepid, mundane vision based on prioritising business interests.

You may have noticed that pro-union commentators are always telling us that our case next time must be realistic, pessimistic even. You might be a little suspicious of the enthusiasm with which they offer their wise counsel.

You’d be right to be. All the recent evidence suggests that in a head-to-head contest in which one side offers a new and different future and the other offers a dull kind of continuity, continuity isn’t winning.

Many of you will have laughed at the Theresa May ‘a united Britain is an unstoppable force’ stuff. Unfortunately, you probably also laughed at ‘take back control’ and ‘make America great again’. Even in France where they thought they’d found their perfect liberal centrist straight man in Emmanuel Macron, suddenly he’s got a little known leftist come from nowhere to be a close challenger.

I’m an awful long way short of being convinced that Sexy Brexit can win in Scotland. But it would be a catastrophe if we tried to fight it with a tepid, mundane vision based on prioritising business interests.

So, staying firmly within the bounds of possible and credible, our case must be exciting and dynamic as well.

If we allow this to become a rerun of the old campaign, we’ve made a very big mistake.

If we can manage it, a second and important aspect of a Sexy Brexit strategy needs to be addressed; it’s going to be pretty difficult for some parts of the No coalition to swallow. The ‘liberal internationalist’ strand of anti-independence sentiment is bound to feel uncomfortable.

It doesn’t matter how much the language is manicured, a future based on arms sales to some of the world’s worst people is not the sort of thing I can imagine Kezia Dugdale celebrating with enthusiasm. To the left of Kezia, it becomes harder and harder to see how this coalition holds together.

The straight face Ruth Davidson can keep while ignoring questions about her party’s appalling ‘rape clause’ rather confirms my suspicion that Ruth would sell whatever she’s told to sell. But this just makes the No campaign more and more Tory.

Which create a substantial opportunity for the Yes campaign. We need to get over some past enmities and start to see many people in the Labour Party in Scotland as allies. If unionism becomes a less and less comfortable place for them to be, we need to make ourselves more and more welcoming.

My experience has been that everyone is seeing the next independence campaign as if it will be a re-run of the last one. For example, there’s an assumption that once again we’ll be pinned to an interviewer’s chair answering an endless stream of questions for a year.

We must relentlessly force No campaigners to own every mistake and failure of Brexit, of Tory government in London. We need to make sure that the ‘two futures’ frame is the one we use.

But we’ll be able to answer those questions much better than last time while the No side now has a world of questions to answer for itself. If we allow this to become a rerun of the old campaign, we’ve made a very big mistake.

We must relentlessly force No campaigners to own every mistake and failure of Brexit, of Tory government in London. We need to make sure that the ‘two futures’ frame is the one we use. And we need to make their future look nasty and risky, ours hopeful and exciting.

And we need to do everything to polarise their own campaign. The more Tory it becomes, the better for us. The easier it is for Labour people to jump to our side, the faster we’ll make progress.