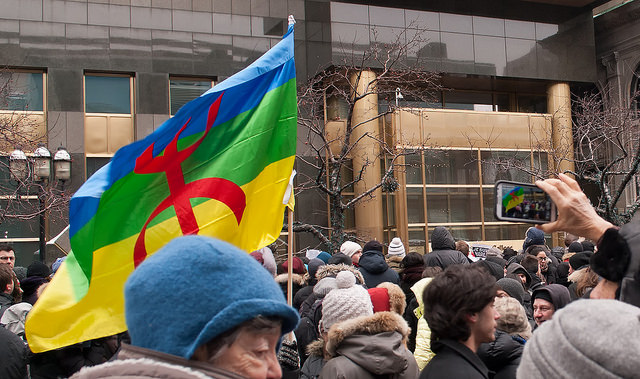 Common Weal director Robin McAlpine argues that while unionists don’t want any comparison to be made between Scottish independence and Africa’s decolonisation process, a recent conference on the Canary Islands has convinced him that there are real and meaningful connections and parallels

It is also worth noting that this rule is mainly set by white Europeans (who unfailingly know what is good for Africa and its people).

Remember, the situation in Africa is ‘completely different to Scotland’.

So I had an interesting weekend which I spent at a summit in the Canary Islands which brought together autonomy movements. (The Canaries are a Spanish colony which actually sits on the African continent and has an active independence movement.)

I’ve been invited to quite a few of these in Europe but what was different about this event was that it brought together campaigners from both Europe and Africa. So while I have learned a lot about Basques, Catalans, Corsicans and Flemish (among many), I must admit that I have been far from knowledgeable about what is happening in North Africa.

READ MORE: Conference brings together colonies and stateless nations in defence of self-determination

It was therefore very instructive to spend time with the North African representatives. I learned much about the situation of the Amazigh people in Morocco (which I’d previously known as the ‘Berbers’, a Roman-imposed name which basically means barbarian).

I found out more about the movement of Kabylie people in northern Algeria who have been campaigning for their own state for more than 100 years, about the Azwad people in Mali, And I also learned about civic autonomy movements in Libya, Burkini Faso and Mauritania.

To begin with, perhaps the most common theme that emerges is about representation and influence. All of these movements exist in nation states where they feel that they do not have sufficient influence over policy and that policy therefore doesn’t reflect their hopes or their needs.

All of them therefore reported that they suffer some form of economic under-development – that their communities don’t have the economic conditions that they believe would best allow them to thrive.

But none of them talked only about political or economic issues. While the severe human rights abuses their communities have faced in the past are no longer anything like as acute, still they experience what they believe to be forms of cultural repression.

Their languages are often not permitted for official purposes. Their history is barely taught in schools and it is generally seen through a colonial lens. There is insufficient support for the promotion and development of their culture.

Yet when they raise these objections and issues, they are told things like ‘you’re being divisive’ or ‘you’re on the wrong side of contemporary history’ or ‘things are better for you with paternal government’ or ‘you are alone and isolated’.

Now, I promise that this is not meant to be an exercise in unionist-baiting (well, perhaps a little…). I believe that Scotland did face many of the symptoms of colonialism. There was a very high degree of military occupation with effective martial rule being imposed on many parts of the country (and in many occasions genuinely viciously).

Our language and culture were very clearly suppressed – by law and by force. There was absolute devastation of parts of the country by a military which was an occupying force (the virtual levelling of Dundee by Cromwell’s forces is insufficiently known).

But there are three very substantial differences with the situation in Africa. Firstly, while there was what might be considered a kind of low-level racism shown to Scots, it was not the vicious ideological racism which underpinned the most disgraceful treatment of Africans.

As an example, while many Scots were effectively forced into indentured labour (a kind of time-limited slavery) during the Clearances, it was initiated as a legal contract between equals. That is very clearly not the case with the inhuman brutality of slavery.

The second is that many Scots were themselves coopted into the ‘occupation’, not least those who signed up to the anti-democratic decision to merge Scotland and England politically. Again, no Africans were granted extensive lands, wealth and title for their cooperation.

And of course there remains little living memory of any of this in Scotland – in Africa it remains real and raw and present.

So I would never propose any equivalence between the Scottish independence movement and the African decolonisation process which continues to this day.

But I now feel that I can argue that there are real and meaningful connections and parallels. And I feel I can argue that because that’s how the representatives of these movements tell me they themselves see it.

In conversation they made clear that they believe that the desire of people to make decision-making much more aligned to their own hopes and values is a a consistent human reality.

They did not think there was a hierarchy of the right to self determination. And (most humblingly of all) they told me that they wish to show solidarity with the Scottish independence movement and that they hoped for our solidarity too.

This really mattered to them. They feel like they are isolated and forgotten, that people believe the decolonisation process is a part of history. They were very clear that the chance to sit as equals with Europe’s autonomy movements mattered very deeply to them.

They want to be a part of the world community as equals. They don’t feel that the geopolitical imperatives of how the big powers treat ‘sensitive’ regions like theirs leaves any space for even passing concern about them and their communities.

(As the Libyan representative reminded us, they had a pretty modern, advanced economy – until the recent military intervention of the west did so much harm to the fabric of their society.)

If nothing else, they told me, at least the autonomy movements are willing to sit with them and listen to them and offer solidarity. The west’s war games and resource wars don’t leave a lot of room for solidarity with people who feel oppressed – unless there’s something in it for them.

And so we were all able to sign a joint declaration calling for the right to self determination and the peaceful and non-violent resolution of disputes.

Of course these representatives don’t speak for their entire nation, any more than I do for mine. But I left inspired by the feeling that perhaps democracy, autonomy and self-determination movements around the world aren’t on the wrong side of history at all.

Perhaps if, by working together to ensure that we are no longer ignored by the big powers, no longer isolated and divided, perhaps then people might just understand that we too have a vision of a better world.

And that our vision doesn’t begin with bombs and banks and belligerence – but with people.