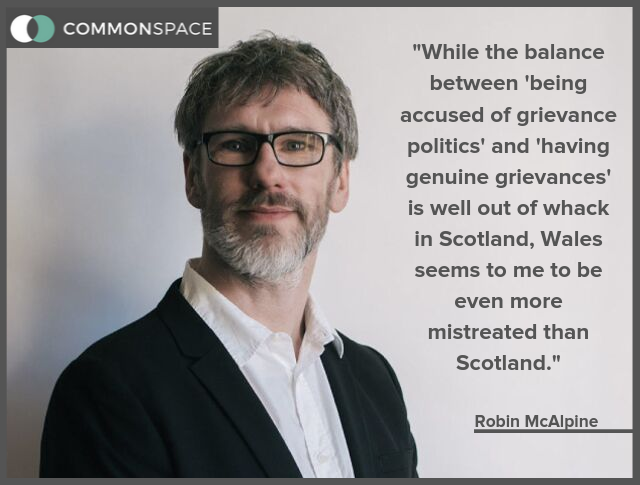 Common Weal director Robin McAlpine compares the current state of the Scottish and Welsh independence movements, and asks what they might learn from each other

I’M writing this in Cardiff. I’ve been down doing some meetings and am just about to head off to Swansea where I’m speaking at the Plaid Cymru conference. I was delighted to be invited because I’ve long believed that Scotland and Wales should be forming stronger links.

This is a real weakness; indeed, I’ve often pointed out that one of the big mistakes Europe’s autonomy movements have made is to let the powers that be persuade each of us that we are alone, the odd-ones-out.

In this, Scotland is comparatively lucky. The impact of devolution and various other factors like our recent history and geography led to a build-up of pressure which gave us the 2014 referendum. Like it or not, by granting a Section 30 Order, Westminster gave legitimacy to Scottish independence (which is one of the reasons they’re so determined never to do it again).

This isn’t the case in Catalonia where independence is still treated as an ‘outlaw belief’. Autonomy movements like Corsica or Greenland are taking a quite different route, the Basque Country is trying to move past a period of violence and the Flemish are in a complicated situation where the leading independence party is in power nationally and not pushing very hard from where they are.

So I’ve been following what little I can on Wales with interest, and I’ve had a number of meetings with Welsh activists in Scotland, by Skype and a couple since I’ve been down. This is hardly enough to give me a rounded knowledge of things but it has enabled a few initial impressions.

First, Wales is starting to go through some of the ‘I’m not a nationalist’ navel-gazing and ideology-reconciling that Scotland has been going through for a while. It’s particularly driven by the EU vote.

While Wales as a whole voted to leave, recent research strongly suggests this was little to do with the Welsh and a lot to do with English retirees (and it is telling for me that this research was done by Danny Dorling, an Englishman – I suspect the London media would have taken it less seriously had it come from a Welsh academic…)

Just over one fifth of the Welsh population was born in England and quarter of them are over 65. The Welsh-speaking parts of Wales all voted Remain, and Plaid Cymru has taken a strong Remain position ever since.

This is what leads to articles like this one in the Guardian in which the author struggles to reconcile her inherent Guardianista anti-nationalism stance with the growing recognition that Wales might well be better off managing its own affairs given the direction of the UK.

But what stood out for me was her repeated references to ‘Cofiwch Dryweryn’, graffiti appearing more and more around Wales. It means ‘Remember Tryweryn’, a village which was abandoned to the bottom of a new reservoir created solely to serve the needs of Liverpool.

There were two things about this which hit me. The first is what would happen if Scottish independence had used similar cultural approaches. I’m pretty sure that had ‘Remember Ravenscraig’ become an indyref slogan it would have been condemned not only by the unionist media but by the SNP leadership.

But that’s the second thing; while the balance between ‘being accused of grievance politics’ and ‘having genuine grievances’ is well out of whack in Scotland, Wales seems to me to be even more mistreated than Scotland.

It must surely be inconceivable to imagine an English village being abandoned to the depths of a reservoir to serve the needs of the Welsh, and objectively, while Scotland’s economy does badly from UK management, nothing like as badly as the Welsh economy.

That’s the other thing which stands out whenever you talk to a Welsh independence supporter – it’s not many sentences in before they articulate some kind of frustration at Wales’s inferiority complex.

It’s hardly surprising; it stood out to me that, even after British panel gameshows had realised the constant anti-French and German jokes were utterly jarring, the anti-Welsh jokes continued for quite a while.

Given that I’ve been asked to talk to a fringe meeting about political strategic approaches to Welsh independence campaigning I’m going to focus quite a bit on confidence-building (something we still need to do more of in Scotland).

This takes me to another point; there is quite a clear difference in the tone and attitude to independence in Scotland and Wales. Put as simply as I can, there just doesn’t feel to me to be the kind of self-certain swagger among the leaders of Plaid Cymru that there is among the leaders of the SNP.

READ MORE: Paul Valente: The view from Wales – why I joined the SNP and attended my first conference last week

It’s interesting that every conversation I’ve had with someone senior from Plaid has focussed entirely on how to win independence. It’s an open question and one they are intent on exploring.

I remember quite clearly what the SNP was like when it was mission-orientated; it is now much more career-orientated. Plaid feels very mission-orientated to me. Even when not discussing independence, big issues like a Green New Deal are on the agenda (but conspicuously absent from the SNP conference agenda).

So there is no question that support for independence in Wales is on a very substantial upsurge; even the tone and feel of things from talking to people makes this clear. I know people who came down from Scotland to the recent big march in Merthyr Tydfil and they were swept away by the atmosphere.

READ MORE: Scotland and Wales pledge to unite to fight the repeal of the Human Rights Act

Which brings me to a final point; that march ended with a rally and speaking at that rally were rugby commentator Eddie Butler and former footballer Neville Southhall. I did a double-take, and it made me ask a question – where the hell are Scotland’s indy-supporting celebs?

The total stasis in the fight for Scottish independence has left me feeling a bit jaded of late and Wales has given me a little burst of energy. It’s refreshing simply to be around a movement where the ultimate goal still seems to be at the centre of everything (rather than an endless series of reasons why some proxy must be the focus before the ultimate goal can be pursued).

I hope Scotland and Wales can continue to grow our connections. It’s not just that we’ve got a lot to learn from each other, it’s that we’d be stronger if we did. I’m certainly going to put more effort into keeping myself informed.