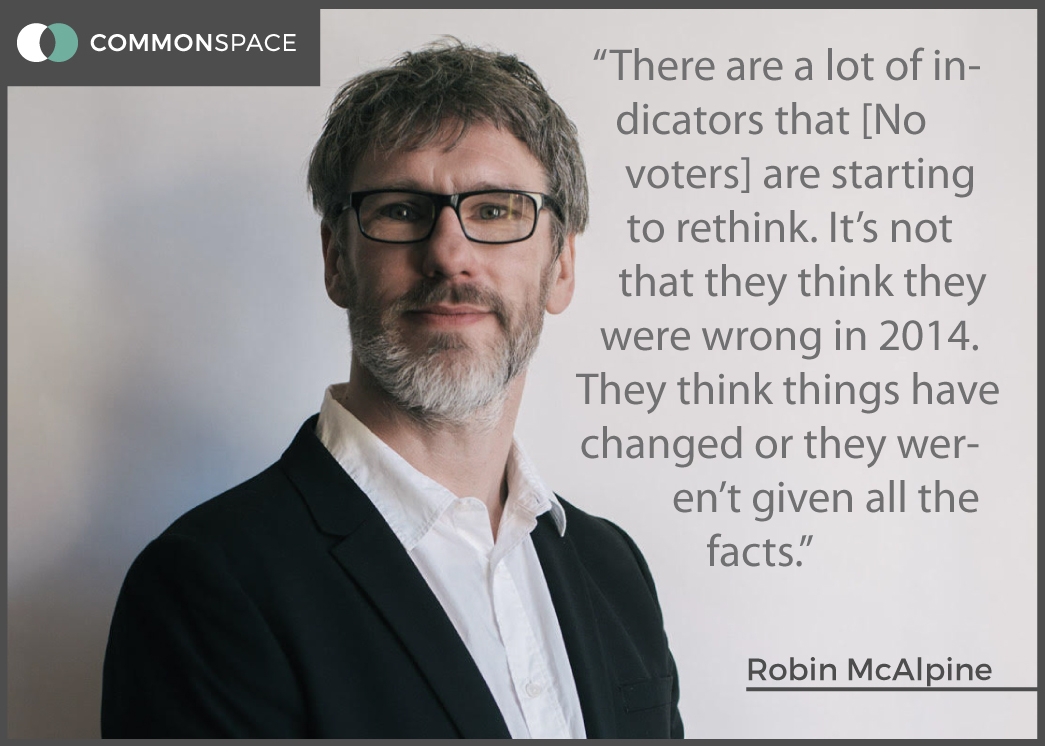 I’VE WRITTEN on a number of occasions recently that I believe Scotland is clearly moving towards independence. Is this just wish fulfilment?

No, it really isn’t. I’m looking at new data (commissioned by the Scottish Independence Convention to inform the strategy of the organisations we’re currently fundraising to set up). That data is not top-level voting intention but a careful attempt to work out what is happening just below the surface. And it’s that which makes me more confident.

Unionist opinion is hardening; non-ideological No voters are going the other way

In the polling work we did we asked a number of questions to try and get behind the nature of people’s No vote. For example, to see how strongly motivated people were we asked a question about whether they had taken practical steps to ‘protect’ them from their fear of independence.

So the headline is that ‘No voters are becoming more No’. However, just below that it is clear there are two kinds of No voters – ideological unionists and people who ‘just voted No’.

And on average it may look like it is getting a little worse – but that’s because something in the order of half of No voters seem to be either ideological Unionists or they’re really scared. That groups is indeed hardening against independence. But we lost that group long ago, and they’re probably only 25 per cent of the population or so.

So what of the other people who voted No? There are a lot of indicators that they are starting to rethink. It’s not that they think they were wrong in 2014 (people generally tend to conclude that their past decisions were right – at the time). They think things have changed or they weren’t given all the facts.

And they’re genuinely worried about Brexit and more generally about the direction of UK politics. They are more than averagely receptive to ‘here is the alternative’ statements. And we only need ten percentage points of them to get to something like a 60 per cent Yes vote.

No voters are more like Yes voters than Unionists

This is (for a strategy wonk like me) one of the most important findings. If we divide the No vote as above – ideological Unionists and people-who-just-voted-No – and we look at the Just Voted Nos (I’l just use No Voter for short here), then most things about them are more similar to Yes voters than Unionists.

For example, Unionists are particularly risk-averse and constantly express fear about the future while Yes voters are a bit more willing to accept risk and are more optimistic about the future.

Well, No voters have an average attitude to risk and optimism that is much closer to that of an average Yes voter than of a Unionist.

Likewise, in age, social class, voting intention (roughly conservative-progressive spectrum) and a number of other factors there is little to separate No voters and Yes voters and the gap between No voters and Unionists is bigger.

Undecideds are rising – but coming more from No than Yes

Another important factor is that a lot of people are less certain about their choice more generally. If asked in the way that we did it, people who had previously been more confident about their vote were moving to an undecided position. And that seems to be happening at a rate of something like two-to-one – two No voters are now undecided for every Yes voter.

‘Undecided’ is good for us. It is partly just a combination of the UK’s general political chaos and the fact that people tend to be less certain about decisions that are not imminent. But it means old patterns are susceptible to change – which is what we need.

Our ‘women problem’ is rapidly receding…

When looking at a population as a whole the temptation is often to focus on smaller groups of people which contain large variations in voting behaviour and to miss large groups with smaller differences – even though the total is bigger.

So we’ve spent a lot of time looking at right-wing voters and how they behave but not enough time pointing out that the differential vote by gender is a big issue. Like-for-like, if you took a man and women with exactly the same profile (age, class, income, place of residence, political inclination), he was statistically more likely to vote Yes.

There is a world of campaign theory on whether women tend to be more risk averse or not – though the general conclusions is that they do tend to be. But in the context of Scottish independence, Brexit seems to be becoming the bigger risk.

In most age groups female voting intentions seem to have caught up with male voting intentions – or be catching up quickly. The fact that this is particularly true of women who respond most to messages about the threat of Brexit on social services strongly indicates what direction this group is coming from.

…and our ‘age problem’ contains opportunities

One thing not to kid ourselves on about is progress in winning over older voters. It is a little difficult to differentiate the causes. For example, this group is the most risk averse, much more likely to profile as ‘unionist’ and also much more likely to read the Daily Mail or Daily Express. Cause and effect is hard to pick apart without more qualitative work.

But there are certainly some hints that those most reliant on public services can be influenced with a judicious bit of fear – so long as it is carefully attached to hope. More needs to be done on this.

My own personal biggest surprise is the signs of what’s happening in younger groups. I think we (me included) tended to get into our heads that we’d ‘won the young’ and so must now focus on the old. But that might not be true – in a good way.

We’re not losing support among the young – but the potential to grow it seems to be expanding. Put simply, even the pretty high pro-Yes vote among young people looks like it can be very substantially increased in post-Brexit Britain (and this group is generally less risk averse anyway).

We may benefit greatly from refocussing on the young vote, not least given that we all know that the average age of indy activists is on the high side. But it definitely suggests we need to think hard again about maximising turnout.

The core format of the poll was to ask a lot of demographic and ‘psychographic’ (personality type) questions, followed by seeking the response to a selection of 25 general pro-indy statements.

The evidence is quantitative rather than qualitative (again, we need to know more), but there is a clear sign that the right messages are getting people engaged and encouraging them to think again. I really think part of the problem is that they’re not hearing these messages.

Here there are a few predictable things, like fear-hope works better than any other formulation (provide a negative and then ‘solve’ it with independence) and that messages about outcomes work much better than messages about process (everyone knows Brexit negotiations are a mess, but talk to them about what it means for public services and jobs).

The previous qualitative work and the profile work above leads me to strong conclusions – there is no fundamental ideological problem with independence for the next 20 per cent of voters and they seem to be attracted by some of the indy optimism – but there is a barrier which currently stops them ‘crossing the road’. We need to be much more effective at talking to them.

Independence is not a ‘known quantity’

For reasons of not wishing to make public (just yet) some key findings on which messages are having the biggest impact, I’ll be a little vague here. But there is a clear and consistent trend on the statements No voters were most responsive to – and a conclusion I’ve drawn from it.

That conclusions is that our target No voters need to be exposed much more to the ‘why’ about independence – unpacking what it means for them practically, its benefits. I fear we may have assumed that this is a given and that we’ve focussed on defending against attacks (the never-ending groaning noise of GERS…). Again, we need to find out more about this.

The plan from here is to do a similar bit of work on negative propositions (which of the things that are said against us have the most impact with voters), draw some conclusions and test those qualitatively (structured discussion work). That should take us close to having a pretty good idea how to win an independence campaign.

There are two caveats. The first is that we all need to be open-minded about strategies for winning. I’m still adapting my thinking all the time as I gain new information and you should too. I’ve heard too many people saying ‘all we need to do is knock doors’ or ‘we all know how to win’ (followed by a load of totally contradictory conclusions…). That’s not how winners win.

The second is that it is clear that the potential is there – but we have to do certain things. And a number of these things are not party political things but rather campaign and messaging things. So we need some way to get these things done. Which means we need a national campaign organisation. Which means you need to donate to the fundraiser now.

But overall, while the surface waters may well be choppy and unpredictable, there are tides underneath which are more consistent – and moving our way. Why is Scotland in Union running campaigns called ‘Yawn’? My assumption is that they know some of this stuff as well. Their best chance of winning is there being no conversation.

They need to avoid the real fight over Scotland’s future, because the next 20 per cent of No voters whose support they need to shore up have not been won over by their ‘look over there!’ strategy so far. Slowly, softly, they are losing them.

But we only win them if we start listening better. Your optimism will grow if you do…