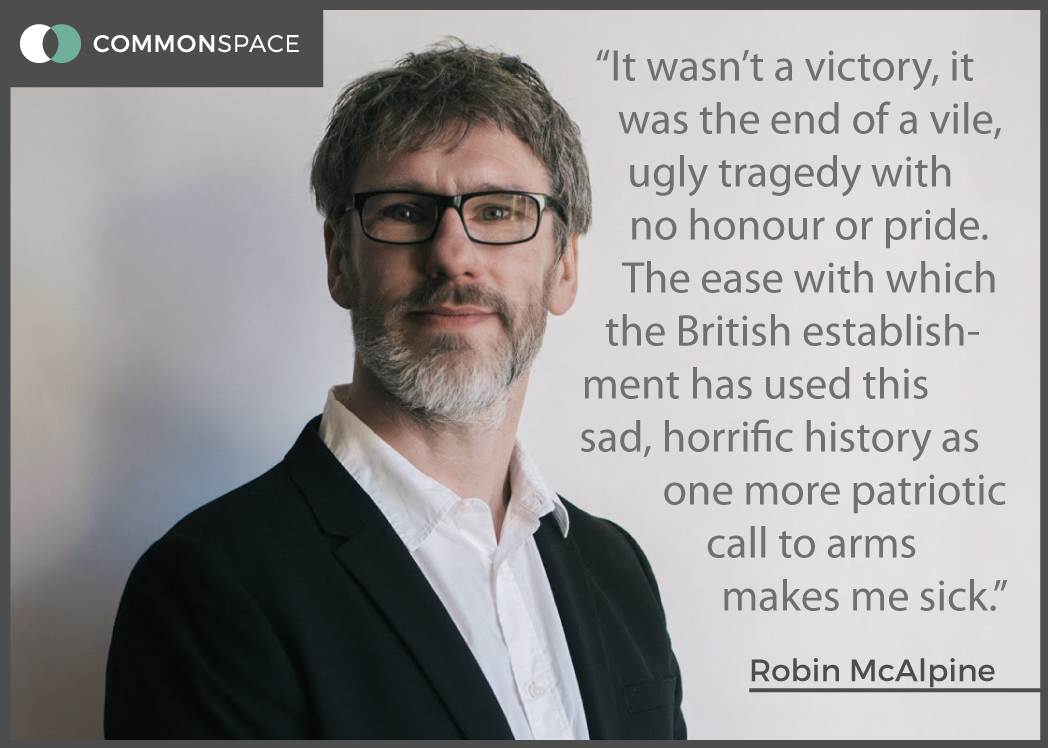 SO ARMISTICE is nearly upon us, and the weapons I’m looking forward to being put down largely involve the British state’s propaganda tools. Disgracefully, this World War One centenary seems to have been only one more chance to promote a Patriotic British Militarism.

That makes me very angry indeed. On a number of occasions I was honoured to be invited to have lunch with the local guys from the British Legion on Armistice Sunday. They had almost all been young conscripts and what happened to them, what they did, deserved commemoration.

But somehow, over the four years we’ve been ‘commemorating’ the centenary of the First World War, something else has happened. Like so much in modern Britain, it became a propaganda campaign.

I watched quite a lot of the various programmes commissioned as part of the First World War centenary – until I couldn’t any more. I didn’t see a single one of them (drama or factual) that didn’t seem to me to end with the conclusions that the whole thing was ‘unfortunate but necessary’.

Sure, many of these programmes had a section which briefly showed there was some anti-war protests, or that the generals really were inhuman in the way they sacrificed the young, or that the trenches were an abomination. But once that section was over, we were reminded once again of ‘plucky Belgium’ and the pressing need for war.

For 100 years the memory of the First World War was of a monstrous mistake, a horror we must never repeat. Apparently the BBC wasn’t having that. Thus it runs a series of programmes in which the ‘balance’ to right-wing militarist historian Max Hastings making the pro-war case is right-wing militarist historian Niall Ferguson arguing it was a mistake because it cost us the Empire…

And of course its efforts to rebrand the First World War as a good idea follows hot on the heels of the attempts to rebrand the professional soldiers as some kind of ethical heroes and rebrand the security services as a friend to the people.

In fact, you’d almost think that, from the moment the BBC did some good work uncovering the fact that the government and the security forces were lying through their teeth in 2002-03 to manufacture a justification for an illegal war in Iraq, the state wanted it back on a leash.

First the utterly farcical Hutton Report which found the blatant liars not guilty and those who exposed the lies as the criminals. I think I’m right in saying the only people to have lost a job over the Iraq scandal are journalists exposing it.

And then, a few years later, we end up with a series of BBC ‘security correspondents’ and the like who seem to me indistinguishable from secret service press officers.

Iraq was a threat to the military order, and the military order seems to have been much more efficient at closing down that dissent than they were at, say, not destroying any Middle Eastern country they point a missile at.

If you haven’t noticed that the UK has turned into a state fuelled by propaganda then I suggest you’re not paying attention. The most pervasive strand has been what you might call ‘The Great British Project’ – be it Bake-Off or Royal Wedding, you shall have enough bunting stuffed up you until there is no space left for dissent.

I mean, there was a BBC programme which was actually broadcast called ‘I Love My Country’. Imaging RT (Russian) or Press TV (Iranian) had been that crass and clumsy…

But the BBC really is only one of the functional arms of the New British Patriotic Programme. I think I first noticed it when a quiet and discreet day marking the contribution of the armed services was turned into a US-style, flag-waving propaganda affair in Armed Forces Day.

It was such a blatant attempt to create a kind of jingoistic, Americanised lionisation of soldiers and war. It would make either Trump or Putin very proud.

But since then it sometimes feels like there has never been a year without a Grand Patriotic Event – they come with alarming regularity.

The propaganda model has been very deeply analysed and understood. How it works is entirely the same whether your are Orwell’s 1984 or The Guardian’s multiple excuses for gushing over lovely Royal people (and their clothes). The question is only purpose and degree.

In Britain the purpose is easy – we’re falling apart and everyone knows it. Think about it this way; one of the single most popular cultural memes of the last ten years is 100 per cent, explicitly, openly government-designed propaganda for a country which has fallen apart.

In case you didn’t know, ‘Keep Calm and Carry On’ was a piece of government propaganda designed to keep the UK public reliable and compliant in the event of a Nazi invasion and occupation. That it became Britain’s de facto slogan for the banking crisis is somewhere beyond ironic.

It’s pathetic. But the only thing that is more pathetic is that it worked. We are all talking about what they want us to talk about. From the evil of the Russians to the ‘anti-semitism’ of the left, no propaganda talking point is questioned by the British media.

The Royals are more popular than ever, the list of ‘heartwarming things that have brought the nation together’ is interminable and the security services are definitely out there saving your life every day by, you know, monitoring anti-fracking activists on behalf of oil companies and spying on our friends and neighbours for commercial advantage.

This is Britain. I grew up in the Cold War and under Thatcher. I’m so used to this stuff it’s hard to tell you. It may be immigrants being blamed for our woes today; when I was a kid it was the striking miners. Then as now the BBC was ten parts reliable stooge to one part critical friend.

I’m used to it, but still I will never forgive these people for what they have done to World War One. Lie about the present if you must, but do not lie about the dead for your narrow propaganda purposes.

(If you want to know more, I can’t recommend highly enough Rob Duncan’s book ‘Objectors and Resisters’ which is published by CommonPrint, Common Weal’s publishing arm.)

These people fought for justice, to save the lives of the hundreds of thousands of poor boys and young men sent to their death for the benefit of Empire. They, and the conscripted dead, should be who we remember this Armistice day – yet I doubt you’ve heard their names mentioned in the four years of ‘official celebration’.

It wasn’t a victory, it was the end of a vile, ugly tragedy with no honour or pride. The ease with which the British establishment has used this sad, horrific history as one more patriotic call to arms makes me feel sick.