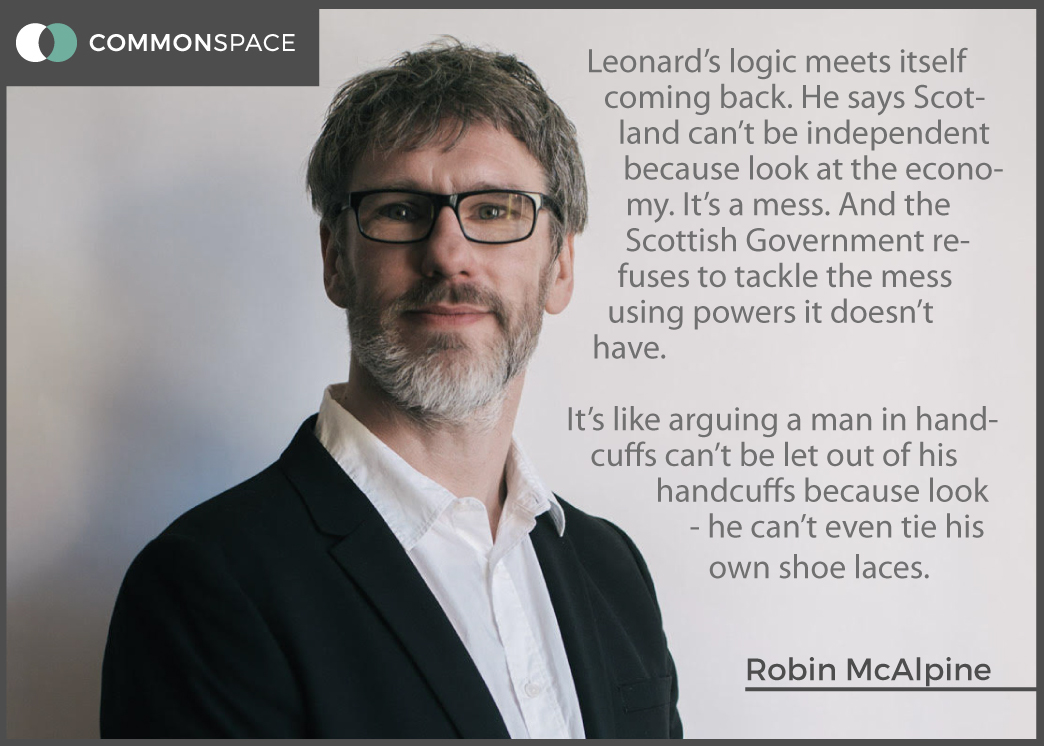 MOST OF Richard Leonard’s performance as Scottish Labour leader has been exactly what I predicted. But not everything – and it’s the surprises which should worry his party.

He’s a 1970s-style ‘big state’ socialist who fundamentally disagrees with concepts of self determination; in his mind the battle with international capitalism has no space for small countries. He opposes independence deep in his bones and there was never going to be any softening of this.

But the surprises are significant. I knew Westminster would come first in his thinking but I’m pretty amazed that Holyrood barely seems to figure much at all. Ask him what’s wrong with Scotland’s economy and virtually everything he goes on to complain about is a power reserved to Westminster.

ANALYSIS: Leonard, Corbyn and the two souls of Labour socialism

If you look at what he spends his time doing you’d assume he was Jeremy Corbyn’s election agent in Scotland. He seems much more comfortable as a kind of back-room organiser. Little seems to suggest he wants to be in Holyrood all that much – never mind be its First Minister.

The effort which has gone into winning Westminster seats (to give Corbyn his majority) seems completely out of step with the effort put into Holyrood seats, with a sort of ‘look, once the serious business of London is done we can think about Edinburgh’.

He seems to believe that you don’t have to care about Scotland much to win votes here. He thinks that what is good for Yorkshire is plenty good for us. I think he thinks that if the Corbyn revolution delivers, the transformation of the UK will sweep him to power in Scotland by default.

So if he’s given much sense of how he’d use policy to change Scotland other than how it will be changed via the ‘one size fits all’ revolution to come, I feel I must have missed it.

But if I’m missing things, I’m not alone. While some of the brighter TV interviewers have occasionally pulled him up on his constant complaints about the Scottish Government based on things over which it has no power, mostly he seems to get away with it.

Ask Leonard what’s wrong with the Scottish economy and he’ll reel off a list of big structural problems that result from the UK economy and which can only be altered using powers reserved at Westminster.

On that, he and I agree. Where we differ is that he believes only Labour at Westminster can change this. I don’t think they will. There may be a Labour majority in the near future; there won’t be a Corbyn majority. Let’s see what his centrist rebels (i.e. his parliamentary party) let him actually do once in power.

My view is that if you want to tackle the big structural failures of the UK economy, the best thing to do is to escape the UK economy. New Labour had 13 years to do something about this and didn’t.

Here Leonard’s logic meets itself coming back. He says Scotland can’t be independent because look at the economy, it’s a mess. And the Scottish Government refuses to tackle the mess using powers it doesn’t have.

It’s like arguing that a man in handcuffs can’t be let out of the handcuffs because look – he can’t even tie his own laces.

ANALYSIS: On Scottish independence, Labour will find no solutions by going backwards

If the media was doing its job properly, he would be eviscerated. How can a politician who doesn’t seem to know what powers the Scottish Parliament has be fit to lead it anywhere? If he can’t come up with a coherent programme of action for Holyrood which would make any difference, why in the name of the wee man would any of us vote for him? Does he even care?

But if that’s incoherent verging on embarrassing, it’s when we get to the constitutional issue we pass straight through the looking glass. He opposes more power for the Scottish Parliament – but he supports federalism.

Eh? What do any of these words mean? Having said he’s not interested in discussing which new policy issues could be decided at Holyrood he throws out the magical F word and skips off back to wherever he thinks this stuff up.

Is there any more that Common Weal can do to prompt the Scottish media set to ask a single, sensible, probing, pertinent question about people who call for federalism in the UK? We’ve provided all the material.

It’s virtually impossible to create such a system unless you break up England – and that’s a political non-starter right now. Are we really supposed to trust our constitutional future to a man who doesn’t understand the basics of constitutional politics?

Or to put it another way, if I went on TV and told an interviewer I’d invented a perpetual motion machine, would that interviewer offer me congratulations and move on to the next question?

It gets weirder still – he doesn’t think that any of this matters. His vision for Holyrood is of a big local authority. His vision for how its powers develop is that they don’t. He’s going to implement federalism which is quite literally unbelievable. And he insults independence supporters with every available breath.

But still, independence supporters are going to vote for him. I can conclude only one of two things. Either he is delusional – or he is willing to concede that the Scottish Parliament is an irrelevance to him which can be run by the SNP in perpetuity for all he cares. So long as Corbyn is PM.

If I was at all vested in the future of Scottish Labour I’d be petrified by this. All that talk of the SNP Government’s ‘tight ship’ and competence seems like a long time ago now. Labour doesn’t need to unpick a well-organised defence – the Scottish Government keep offering open goals.

It’s education policy has evolved from vision to hallucination to psychotic break (‘the voices in my head say SNP Must Test Babies’). If I was leading the Labour Party I wouldn’t just have voted against this, I’d have tried to own the opposition to this disastrous policy.

But Leonard is too busy building up his team for a possible snap general election, so it is civic Scotland that owns and leads the campaign against primary testing.

The UK political context might increase the vote for Scottish Labour in a General Election, but if I was one of his backbenchers I’d be worried about my future. What exactly is Scottish Labour for under Leonard? Why vote for them?

And if you think his own party hasn’t noticed, you’d be wrong. All I hear is how the people who got him the job (on the devolution/federalism/pro-indy wing of the party) are completely disillusioned and how the other half of the party (who wanted to be led by Anas Sarwar) just think he’s weak.

Leonard is becoming a leader that looks more like a bystander, confused as the 1970s hurtle further and further away from him, incapable of explaining how he’d use the powers of the Scottish Parliament to challenge the inequality and poverty agenda of Westminster, in total denial that you can’t insult indy supporters, dismiss their hopes – but get them to vote for you anyway.

His strategy seems to be ‘get my mate Jeremy his majority and then we’ll worry about the rest later’. But at this rate Richard Leonard may soon be joining the ever-lengthening list of Labour’s ‘next First Ministers’ for whom there simply is no later.