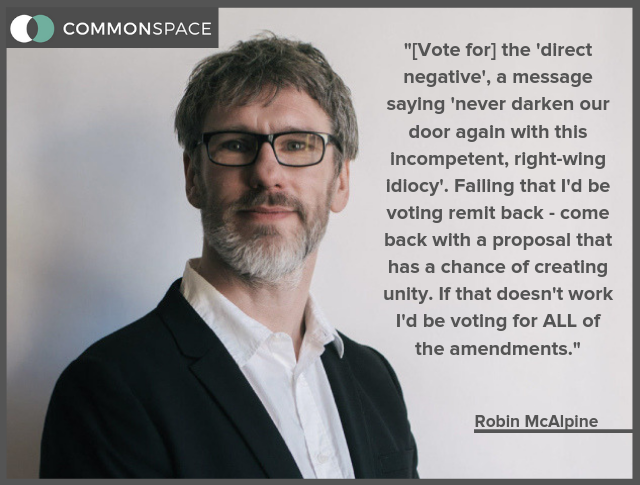 AT THE weekend, delegates to SNP conference will be asked to make what may well be the most important political decision they will ever make.

I really don’t know that Common Weal could have done any more than we’ve done. We’ve published many tens of thousands of words of analysis and critique and published dozens of papers on what the better option is (links can be found at the bottom of this column). We’ve made films, handed out leaflets, talked to meetings all over the country.

We’ve posed the Growth Commission’s proponents crucial questions and we’ve urged them to answer. No answers have been forthcoming; their entire strategy has been based on completely ignoring the debate (and us) and demanding that members simply trust them because they’re important people.

So I’m afraid that if you’re going to SNP conference it is up to you to inform yourself of the arguments. I’ll try and condense the key issues into the following few words…

This is not serious economics

As late as last week the proponents of this motion were circulating a briefing arguing that Common Weal was wrong to suggest it would take three years to introduce a currency because Slovakia did it in just over a month.

We just winced at this; Slovakia was an underdeveloped country crashing out of the Soviet Union and facing an economic crisis. They introduced their ‘new currency’ by taking the old currency and manually sticking stamps on effectively saying ‘this is a new currency’. Is this a serious comparator to Scotland? Have they ever spoken to a serious monetary economist?

In fact Slovakia subsequently joined the Euro. After they met the criteria the time it took them start to finish to formally introduce the actually currency was… four years. The leadership’s case lacks the depth or seriousness of a Reddit thread.

There are only four countries in the world that use the proposed monetary system – Montenegro, Panama, Lichtenstein and Ecuador. No advanced exporting economy in modern history has used this money system – and for very good reason; it is volatile and leaves the economy open to serious harm in the event of any kind of global economic shock.

This is an untried, experimental system used by no-one like Scotland ever and is being justified on the basis of embarrassingly incompetent arguments from people who do not seem to understand what they’re proposing.

They’ve not managed to get a word of support from a single independent economist while many economists are on the record saying the proposals are nuts. This alone should be enough to reject them as they stand.

It is littered with glaring holes

The rules of the European Union say that you cannot even apply to join until you have had your own currency and central bank for three years (because you have to demonstrate both alignment of monetary policy and the ability to change monetary policy). There is no exception.

So an independent Scotland will be locked out of Europe for at least ten years and almost certainly longer.

There are many more examples of these kinds of errors to do with trade, regulation, borders, banking and more – but what we’ve discovered is that the confusion that economics induces in people has been the primary asset of the Growth Commission.

So rather than list the string of major problems – read Craig Dalzell’s Silver Chain analysis for the whole lot – keep in mind that if they can’t answer the Europe question, what does that say about the rest?

It is a sharp move to the right

Nothing causes the handful of Growth Commission advocates to bristle more than to call it right wing or austerity – because it’s the awful truth.

The Growth Commission is based around ‘six tests’. They’re not tests, they’re right wing economic dogma (slash the public sector as a proportion of the economy, make your first priority giving ‘comfort’ to international financiers, that sort of thing).

They make one thing clear; there will be no currency until the public sector is substantially shrunk as a proportion of the economy. They claim that if they get good economic growth that might mean a half a per cent real terms rise in spending year on year.

But that is in effect to freeze Scotland at Tory spending levels for a decade. There will be no uplift in the benefits system if that happens so you can all stop criticising Tory benefits. The only way investment in public infrastructure would be possible would be some kind of PFI off-books model. It’s a recipe for privatisation. No serious measures to tackle child poverty will be possible.

And as for Green New Deal? To say those words while committing to shrinking public investment is a disgrace.

The whole system being proposed is based on the private finance markets of London running our money system and so the whole of the Scottish economy being run in the interests of those finance markets.

These are the policies of George Osborne and Liam Fox and the expression ‘Tartan Tories’ will fit very well with a party proposing these things.

At least some of those supporting the motion seem genuinely to believe that it would be possible to introduce a currency in the first four years of independence despite this framework. Andrew Wilson has been much more honest and accurate – it will take at least ten.

But that’s assuming an awful lot, because having this money system causes a number of things to happen that make getting out of that system harder and harder (three of the four countries that use it are trying to escape but are trapped exactly as I describe).

The only way to start a currency within ten years of independence is to ditch these proposals altogether – unless someone is going to sit in a warehouse sticking stamps onto lots of old five pound notes which say ‘this is now a Scottish currency’.

This will alienate voters

We were promised thousands of converts and high profile business figures ready to change their position on the basis of these proposals. A year later and we’re still waiting.

No wonder – for most voters in Scotland running the economy even MORE in the interests of bankers is unattractive. So is austerity (or frozen budgets for public services – phrase it how you want). The ‘middle ground’ voter in Scotland is on a modest income.

But that is not the main problem; by far the biggest problem is that this is risk all the way. Of the four countries that currently use an informal money system, two are in serious crisis. Those crises are a direct result of not having their own currency – Montenegro couldn’t raise finance for road building so had to take ruinous loan terms from China and Ecuador has just had an IMF ‘bailout’.

That’s because neither can source public finance like a normal country. This is exactly the glaring economic risk Common Weal has been flagging up – and yet still delegates are expected to vote to become the fifth country using this system?

Just wait until Derek Mackay has been on the Andrew Marr Show talking at length about how he thinks Scotland could avoid an IMF loan or having to go cap in hand to China if it wants to build a school – and then let’s see how popular this is with voters.

Independence is a change agenda and pretending otherwise is dishonest. If we can’t sell change, we can’t sell independence. It’s that simple. The Growth Commission is trying to prevent change by keeping Scotland wholly integrated with the British economy. ‘Why take the risk’ will be the question at the forefront of voters’ minds.

It will shatter the movement

If you list the people or the organisations who support independence because they want to keep the UK’s banking regulations, the UK tax code, the UK benefit system, UK levels of public expenditure and the almost complete subservience of Scotland to London’s private finance markets, you’ll be looking at a short list.

One of the strengths of the independence movement has been that, despite us having different views on many subjects, we have managed to maintain a ‘shared space’ in which we could all live. That space was a vision of a different, better Scotland.

This proposal lays waste to that shared space and raises a torch to any semblance of unity. I have never seen such a provocative act of destruction; this will tear us apart.

There are a few in the SNP who are clinging on to the belief that people like me will throw a temper tantrum, blow off some steam but then just fall meekly in line. They should get their head round the fact that it isn’t going to happen – these proposals contravene fundamental political principles that I hold.

If this passes I will personally fight and fight and fight until it is reversed (as the de facto position for the movement) and will most certainly criticise this appalling stitch-up in public. Those of you who will smear me with claims of disloyalty should be absolutely clear on who did this. I didn’t split anything; I didn’t do this damage.

To the four people who have done this (Nicola Sturgeon, Andrew Wilson, Derek Mackay and Keith Brown) – you break it, you bought it. Own what you destroy with this act of vandalism. I am a very long way short of being alone in this.

So reject this now or live to regret it

There is only one course of action I would be considering if I was an SNP member – the ‘direct negative’, a message saying ‘never darken our door again with this incompetent, right-wing idiocy’. Failing that I’d be voting ‘Remit Back’ – come back with a proposal that has a chance of creating unity.

If that doesn’t work I’d be voting for ALL of the amendments. Yes, two of them revise the same paragraph in different ways but that would then be for the leadership to resolve. I warn you that while this would leave a small space where we could still all live together it’s still an agenda I’d never consider voting for, even after the amendments.

I’m furious about all of this. The whole point of Common Weal, my whole aim in life, is to be constructive and positive, not oppositional. But we will never back down from a fight when wrong is being done – and wrong is very much being done here.

The Common Weal team has worked ourselves into the ground trying to save Scotland from this awful package of measures. There’s little left we can do.

Delegate – the future of Scottish independence is in your hands. Choose to be progressive. Choose to be united. Choose to win. Reject this in no uncertain terms.