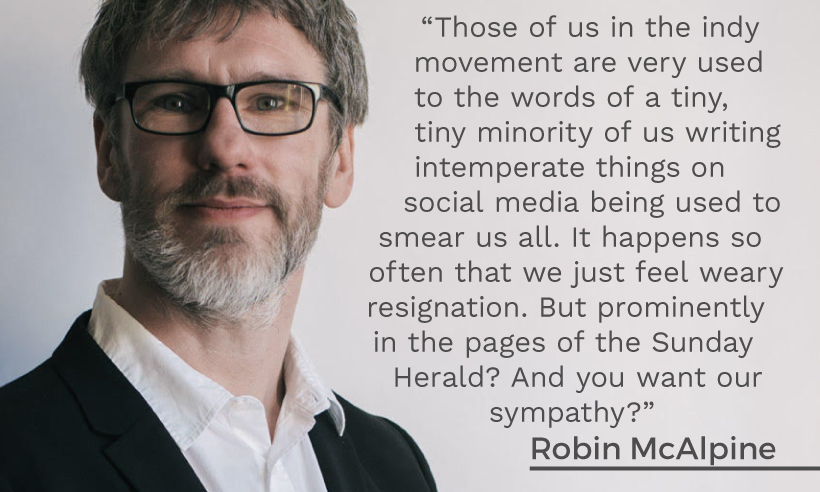 Common Weal director Robin McAlpine argues that rather than smearing the independence movement with the actions of a small minority, the mainstream media should take responsiblity for its own decisions

I AM FREEDOM. I am truth. I am democracy. I am reason. I don’t mean this in any abstract kind of a way, I mean it very specifically – I, personally, am the flesh and bone embodiment of justice.

This is because I’m a dissident. I stand up to power when power is corrupted, more often than not when a compliant media fails in its duty. I have toppled dictators and freed the suppressed masses, because I am freedom.

If this sounds delusional, that’s because it is. And yet it is almost a direct parallel with the stories the UK media tells itself – and us. They are the people who hold power to account, they are the cornerstone of democracy. To regulate them in any way is fascism, or close enough.

That was the story last week when they all congratulated themselves for their political lobbying to prevent phase two of the Leveson Inquiry. It also seems to encompass the stories the Sunday Herald is telling itself.

Let me start by being clear; I left university to become a journalist because then as now I really do believe that a free press is essential to democracy. I have been vociferous about this point ever since; absolutely essential. Just not sufficient.

I also debate whether we really have a free press; every billionaire has the absolute right to be heard in Britain, along with the odd millionaire who sneaks through the paywall. The rest of us – not so much.

I also question whether they have lived up to their responsibility. Frankly, if the world is going to hell in a handcart (as seems now to be widely accepted), where was the media to prevent it?

Holding the financial sector to account so there was no financial crisis? Keeping us all in the loop about the ‘EU bent bananas rule isn’t a real thing’ thing? Is Fox news an antidote to Trump or the Telegraph to Brexit myths?

There have been many really courageous journalists who have done us all a favour by exposing corruption, but they are the exception, not the rule. In many cases it is much more honest to accept that the media has often been complicit in that on what it should have shone a light.

From abuses in the Catholic church to Jimmy Saville to illegal rendition and torture to the refusal to offend advertisers, the hand-wringing over past failures does not seem to be reflected in an appraisal of current practice.

At the top of my list right now is that no matter how long the track record of disinformation and lies, in 2018 almost the entire media seems to take anonymous single-source briefing by the security services as fact.

The only news outlet in Britain that I can find that (for example) asked an independent organic chemist to comment on the official British state position on Novichoks is CommonSpace. The only daily news source I can find which has even mentioned the use of ‘D Notices’ to (voluntarily) suppress investigation of the Skirpal affair is CommonSpace.

Yes, at Common Weal we feel some of your pain, mainstream media. I don’t lack empathy. We fund a news service that employs journalists and we know how hard it is to be judged on a story-by-story basis rather than on the full body of your work. Sometimes it feels like everyone wants every single story published to fully reflect their own precise political views.

And yes, we don’t have your money, but we also know how little money you have these days. Being a journalist is much harder than it once was.

But dear god, could you all stop bragging to us about how bloody important you are and stop bleating about what a bunch of shits the public is.

Which takes me to the Sunday Herald. Long before the weekend’s events I felt the paper slipping further and further into a kind of centrist liberal default position. It seemed keen to shed its mantle of campaigning newspaper with a mission.

Thing is, that’s what I particularly liked about it, and I’m disappointed with the shift. So are many others; everywhere I go I seem to come across Sunday Herald readers who say they don’t know what it’s ‘for’ any more. Many have told me they’ve stopped reading.

These are not the wild fringes. These are people who buy quality Sunday newspapers – mostly professionals and retired professionals.

At the weekend the Sunday Herald’s editor explained that he has been trying to make the paper a safe space for unionist, Labour and Lib Dem readers. I can’t help feeling that those readers were well served by the Scottish media landscape as it was, but what do I know.

And of course the Sunday Herald is more than entitled to go after that audience. I don’t follow sales figures these days but I hope it’s working out for them.

I just wish they’d stop bleating about their existing readers not being happy and compliant customers any more. Of course, they don’t quite say that. They use the powerful person’s get-out-de-jour – ‘abuse’. If a thousand members of the public are unhappy, find the one that swears and smear the rest with that.

Thus we are told that someone phoned the Sunday Herald offices and threatened to ‘skin them alive’. Last time I heard that expression it was the well-to-do coordinator of our local flower arrangers guild warning some school pupils not to bash the displays. The kids managed to shrug it off.

I mean, was this ‘threat’ not assessed as infeasibly time-consuming and messy to be credible? Thinking back to childhood, should I have reported the phrase ‘McAlpine, stop messing about with that bunsen burner or I’ll have your guts for garters’ to the FBI’s Behavioural Analysis Unit? Dissecting children for fetish wear? What an unspeakable animal.

Those of us in the independence movement are very used to the words of a tiny, tiny minority of us writing intemperate things on social media being used to smear us all. It happens so often that we just feel weary resignation. But prominently in the pages of the Sunday Herald? And you want our sympathy?

I believe I can say hand on heart that I have been consistent in condemning nasty and unnecessary bile in political discourse. However, I think the mainstream media might wish to dwell on its portrayal of (for example) the Roma and traveller population before it wishes to point the finger at some unemployed brickie from Airdrie that got carried away on Facebook.

I have worked in and with the Scottish, UK and international media for 25 years now. In that time I have never fallen out with a single journalist or found myself unable to work constructively with any publication. Not even once.

“Stop claiming to be saving us all from our barbarian selves and take some responsibility for your own actions. You’re important, but you’re not gods.” Robin McAlpine

I treat the media with respect, whether they return the favour or not. Having had a good relationship with the Sunday Herald for many years, Common Weal found itself unable to get so much as a mention in the paper for a long time. Do you know how many self-pitying ‘open letters’ I wrote about it?

As the public we have only two levers of power over the media – to complain or to boycott. The media says it accepts this and recognises the legitimacy, but that’s not how it acts. For many years it simply wouldn’t print letters of complaint. Now that it can’t censor social media it creates a story that the complainants are all ‘bad people’.

And anyone who proposes a boycott is simply threatening ‘the institution of a free press’.

I have friends that work at the Sunday Herald. It’s much the same team as before, a team I rate quite highly, and I still have hope that it can again be the paper I so respected in the past. I want to keep faith – but doing a kind of Gerald Ratner on your own readers is not a wise move.

Like so much of the world just now (perhaps all of us, me not excluded), the mainstream media has a clear narrative about itself that it believe to be fundamentally true. If a media outlet hires a bodyguard for one of its reporters, that is used as proof by other media outlets of the reality of the threat, not evidence of a questionable stunt.

Believe me, I have limited patience for endless complaining about the media. I’ve told many independence supporters ‘yes, the media is against you – stop whining about it and suck it up’.

Today I just want to say the same to the media – you’re free to make your own editorial decisions, so stop whining and face up to the consequences. Remember, you’re the powerful ones, not us.

You’re one necessary part of a functioning democracy, no more, no less. Your trust and respect among the public is in decline because of your collective actions (“Enemies of the People” you say?). You have no-one to blame but yourself.