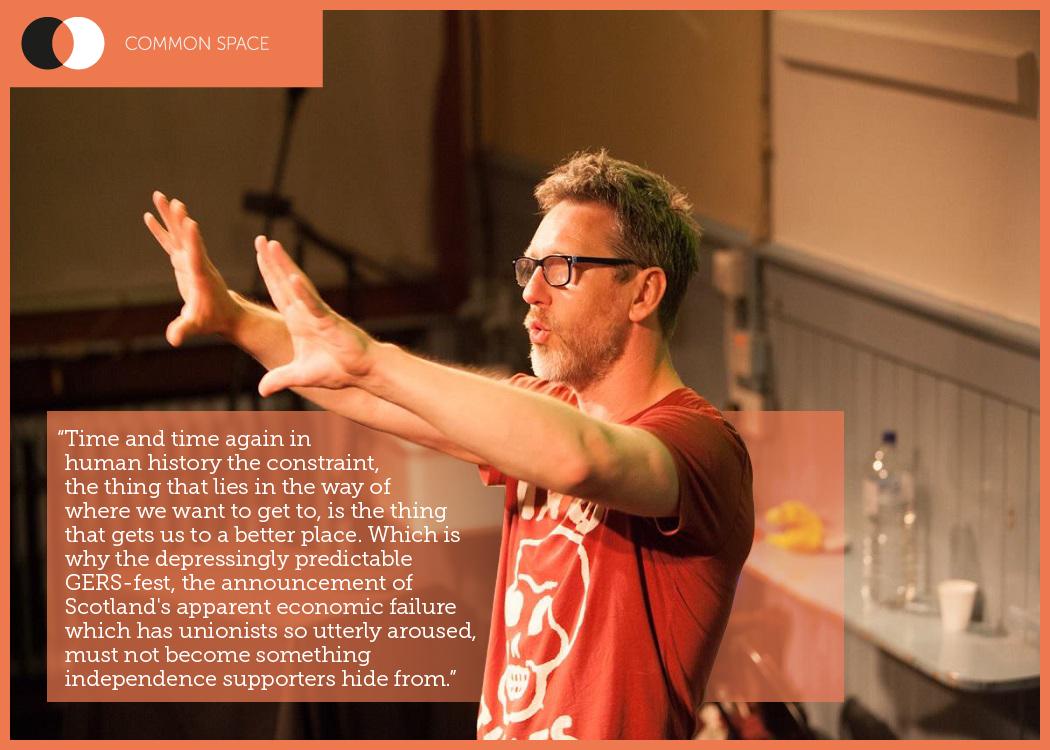 CONSTRAINTS – it’s wrong to see them as your enemy. Time and time again in human history the constraint, the thing that lies in the way of where we want to get to, is the thing that gets us to a better place.

Which is why the depressingly predictable GERS-fest, the announcement of Scotland’s apparent economic failure which has unionists so utterly aroused, must not become something independence supporters hide from.

Because it could lead us to a much better place where we have worked to rebalance the economy to overcome low tax receipts and we could have created a much better way of costing what a Scottish state would require to run. GERS can strengthen Scottish independence.

By focussing on the rest of the UK as a comparator, we miss the point – it’s the UK economy that is the problem, not Scotland’s.

The first thing it does is focus our minds on Scotland’s oil problem. That problem is not that we are ‘cursed’ with a valuable asset buried deep under our sea territory (as some unionists seemed to believe during the referendum). It’s that, like financial services before it, the case for independence simply relied on it too heavily as a one-stop-shop for economic wellbeing.

Like Ireland with housing and Iceland with banking (though massively more financially sustainable than either), we had a strand in the economy which kept delivering tax revenue so we came to rely on it too much. It becomes something like a fairy tale we tell ourselves at night to make ourselves feel safe.

Which is why the constraint of falling oil prices can be seen as a positive – it might force us to start telling ourselves a better story. Which in turn is good, because there’s a much better story to be told.

Because while the oil industry has been good for tax revenues, it has other weaknesses for Scotland. It does not create all that much employment across the country since many of its workers come from outside Scotland and many of its supply chains are not based in Scotland either.

So while it may have helped in the fight against economic inequality through providing public services with money to tackle the symptoms, its nature as a multinationally-owned private industry in itself is a driver of economic inequality.

Time and time again if you compare Scotland with similar sized countries, a whole host of other questions arise. Why don’t we make things? Why do we regulate for such a low-pay economy?

There are much better strands of economic argument that Scotland should be pursuing. As Mike Danson points out in an excellent interview with CommonSpace , by focussing on the rest of the UK as a comparator, we miss the point – it’s the UK economy that is the problem, not Scotland’s.

Time and time again if you compare Scotland with similar sized countries, a whole host of other questions arise. Why don’t we make things? Why do we regulate for such a low-pay economy? Why do we have such awful industrial democracy laws? Why do we allow such massive exposure to overseas corporations in almost every aspect of our supply chains?

Why aren’t we investing more in tourism infrastructure, not least better transport networks across Scotland? Where’s our National Investment Bank? Why aren’t we throwing money at design education? Why do we rely so heavily on retail and why do we allow so much gender segregation with women channeled into low-pay work?

But we don’t ask these incredibly important questions because endlessly, neurotically, we compare ourselves to the one economy which is as bad as ours and so all we talk about is bloody oil.

Of course at times like this I’m instinctively on the side of the Scottish Government – how can you watch the people who have laid waste to the Scottish and UK economies over the last 40 years gloat about Scotland’s weakness and not be?

But when will the Scottish Government find the courage to step back from this perverse game of economic body-shaming being played with the rest of the UK (‘look, we’re bigger here, but smaller here – you look sooo ugly’) and move us decisively in another direction?

We all know where we need to get to – a more balanced economy. Successful, resilient economies do not rely on one or two industry sectors for economic wellbeing. They rely on diversity – lots of micro-businesses able to compete in local economies, small businesses able to compete with multinationals on the high street, medium-sized businesses that focus on ‘smart specialisation’ exporting like global businesses, the quality end of multinationals based here because of the quality of the workforce and not because they get massively privileged market access.

Basically, we all know how to get there. Business as usual – or even another targeted fund administered by Scottish Enterprise – is not the way. Today and over the next week, Common Weal is publishing three major reports which set out a framework for this kind of transition.

Today, plans for a Scottish National Investment Bank and a People’s Banking Network have been launched – with partners Friends of the Earth Scotland and the New Economics Foundation – and next week will see a major paper on investment strategies and another on the steps we must take towards a proper industrial policy.

But we don’t ask these incredibly important questions because endlessly, neurotically, we compare ourselves to the one economy which is as bad as ours and so all we talk about is bloody oil.

There was a real risk that they would just be filed away as ‘nice contributions – now let’s get back to talking about tax cuts for the oil industry’. I really hope that the constraints on the old vision being forced on us by GERS-fest will force us to look at another path.

The second way the oil constraint may be a positive for the independence movement is that it might make it reconsider how we go about understanding what a Scottish state would look like – and what it would cost.

At the moment we are stuck into a subtractive model of Scottish statehood. It works by saying ‘this is the UK, now let’s subtract from that the bits that are Scottish and the bits that would need to be replicated by Scotland and that’s the price tag for independence’.

It is a model of Scotland’s fiscal situation devised by people who oppose independence (which in itself should be a warning sign). It assumes that the UK represents either ‘normality’ or ‘your only choice’ and forces us to measure ourselves by those standards.

But Britain is nuts. It is a virtual tax haven which willingly allows corporations to decline to pay billions upon billions of pounds of tax. It has a tax code which is mind-bogglingly complex and littered with loopholes which benefit all kinds of wealth.

We all know where we need to get to – a more balanced economy. Successful, resilient economies do not rely on one or two industry sectors for economic wellbeing.

It spends ridiculous amounts on defence and carries an inefficient social security system which has been redesigned for ideological purposes (to punish the poor and frame them as the problem). Almost every form of regulation is problematic, from very weak industrial democracy laws which reduce levels of pay to banking regulation which is so unstable it requires us to shell out eye-watering sums in bailouts.

I am now convinced that Scotland should step away from the subtractive model of its future and instead pursue an additive model. Instead of taking the UK as a starting point, it should think much wider about where we’d want to start from.

If we look at how the better, more efficient public sectors organise themselves and what they spend on the public realm it would be possible to build up a budget for an independent Scotland based not on British practice but on best practice.

Now this wouldn’t be a magic money tree – it would need to be a serious and credible look at what other countries do, both for good and ill. It would almost certainly leave us with a substantial fiscal deficit (though I suspect we could do a lot better than the GERS numbers).

The second way the oil constraint may be a positive for the independence movement is that it might make it reconsider how we go about understanding what a Scottish state would look like – and what it would cost.

And it would also require us to ask some questions that some in the Scottish Government haven’t wanted us to look at. So if we are in a tight global economy and public revenue is so important, why are some so utterly committed to making sure that foreign-owned corporations continue to possess our entire energy system?

A publicly-owned national grid would fill a billion-pound-sized hole in our revenues. And it’s not the only more radical restructuring of the country that could be considered. There is no reason we need to limp into independence looking like ‘little Britain’, dragging its failures behind us like chains.

Of course, we could keep toughing it out. There’s a good chance that by the next independence referendum oil prices will have recovered. And there’s some chance that things in the UK will have got so bad that No voters sympathetic to independence may be willing to overlook the ‘volatility’ jibes about oil.

But that’s a risk. It would be better to look at this constraint on our hopes, this assumption we can just wave the magic oil wand to distract people from genuine failures of UK policy for Scotland, and do something better, something more resilient, something that can stand up to the unionist glee at Scottish failure.

Before the last referendum I was involved in some informal discussions with some economists to see if we could come up with a fiscal model for Scotland which did not rely on oil income, so that we could use that oil income as a genuinely additional income stream which really could be put into a generational oil fund.

Now there looks to be a blockage on the road to the easy-answer solution to a fiscal picture for an independent Scotland. Frankly, I almost welcome it. Let it focus minds.

Nationalisation of energy had to be a part of that scheme, and it was ruled out by the Scottish Government at a very early stage (and they were still notionally wedded to a cut in corporation tax). So it became clear that there was little point in proceeding with the amount of work that would have been required.

Now there looks to be a blockage on the road to the easy-answer solution to a fiscal picture for an independent Scotland. Frankly, I almost welcome it. Let it focus minds. Let us turn our Scottish tradition of hard work and ingenuity to this problem.

We can do better than lie back and think of oil. Let this be the spur to get on with it.