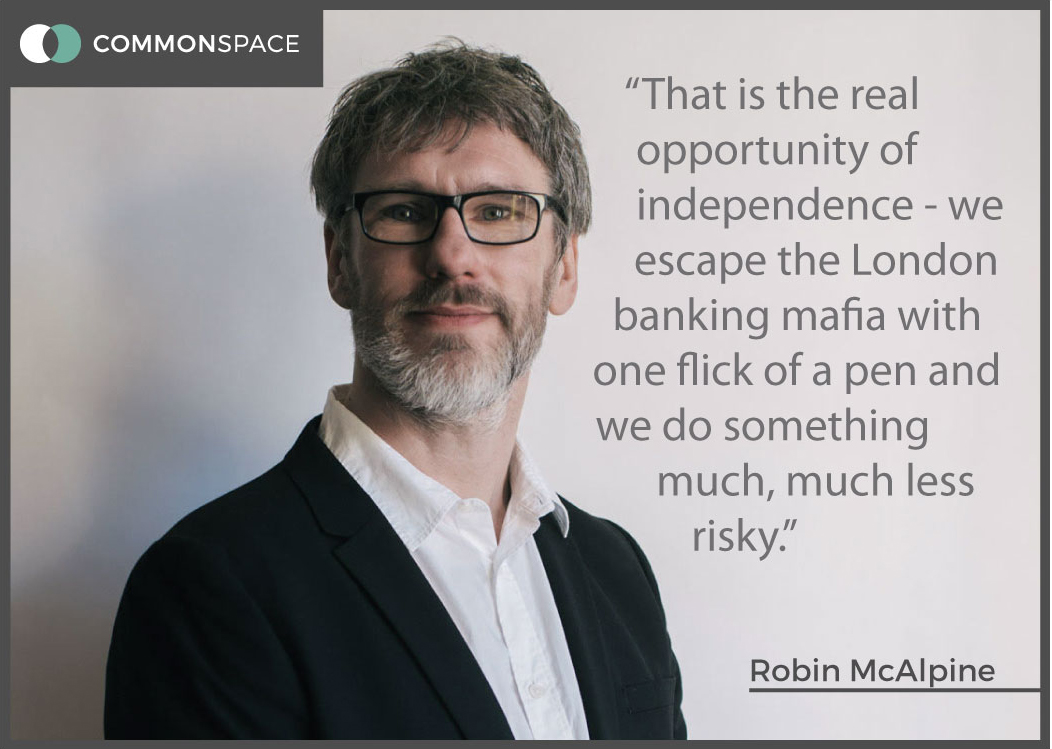 IT IS a little known that the first draft of Franz Kafka’s seminal novel The Trial opened with a small businessman called Joseph K becoming a client of the Royal Bank of Scotland and ended with a statement by the Financial Conduct Authority expressing regret they didn’t have the power to stop him getting his head chopped off by the bankers.

On the upside, the FCA has opened an investigation into the Child Catcher from Chitty Chitty Bang Bang. On the downside they don’t have sufficient powers to rent the DVD so they have to wait for a repeat on TV.

Welcome to UK banking regulation. You may remember that once upon a time in the olden days (2009) a combination of greed, misjudgement and utter corruption led to the biggest financial crisis since the Great Depression.

You may vaguely remember that you were told to shhhhh and go away because David Cameron was going to take decisive action and this was never going to happen again.

If you were really paying attention you might – just – have then followed how in the years after this every effort was made by everyone who counts to gradually make sure that, well, next to nothing changed. Outrage in public, complete capitulation in private.

The end result of all of this is the Financial Conduct Authority.

And all I can say is that the result of its investigation into RBS’s Small Business Butchering Unit (“sure this stinks, but we have no power to do anything about it”) is one of the most pathetic and pitiful things I can recall seeing.

I could go on and explain the outcome and its explanations a bit further, but that would be to treat this joke outfit with much more respect than is due. All you need to know is that there is pretty well nothing a bank or a banker can do for which they will ever be held properly to account. (In the UK at least – even the US has fined RBS many billions of dollars).

It really is time to focus on the reason for this – the UK economy has productivity, manufacturing, investment and innovation rates so poor that if we were relying on a productive economy we’d have sunk below the waves by now.

In theory a finance sector is supposed to be a facilitator. It is supposed to provide a range of services to the real economy including the obvious ones like keeping your money and making it easy to pay for things.

But in standard economic theory the biggest role of finance should be to even out the impacts of business cycles. If you get an order for more of the thing you make, but first you need to buy more of the stuff you make it with, the financial sector is supposed to help you even out the cash flow problems via loans.

It keeps the economy moving and developing because it helps you invest now for things that will pay off in the future. It is this which enables industry to grow and improve and innovate and do more and be better. It’s the investment that creates the development which creates the wealth.

Unfortunately the UK started to diverge from this traditional economic theory in the 1980s. Instead of seeing investment as the route to progress it saw profit as progress in itself. In this totally skewed idea of what an economy is, profit and progress became the same thing.

What happened next is that almost all government policy became reliant on this concept, that profit is the sole source of everything. It underpinned Thatcher’s banking reforms, it drove deindustrialisation, it sought ever lighter regulation of everything, it created the Blairite view that poverty is something you accept but then mitigate by taxing profit.

The problem is that profit is not development. Four of the main sources of profit have been the use of monopoly power to crush down on costs (lowering wages and squeezing small suppliers), increasing household debt to fuel unsustainable retail, the artificial inflation of asset values (particularly housing) and the transformation of bankers from service providers into gamblers.

Every one of these activities funnels investment out of the productive economy and into the pockets of those who already had money. If profit is the sole goal of your economic policy, fast profits by those who already have money is the easiest way to do it. So that’s what we did.

The problem is; what do you do when the parasite eats the host? If the FIRE sector (finance, insurance and real estate) eats up all the investment in the economy and everything else dies back, what happens if there is a crisis in the FIRE industries?

And that in a nutshell is where we are. The UK fed the parasite because the parasite dripped honey, but then the parasite eat everything there was to eat and stopped dripping honey. The government should have contained the parasite and tried to revive the entire ecosystem but instead it panicked and just fed the parasite directly (via quantitative easing) and crossed its fingers.

It’s not just that the UK has absolutely no will to properly reform the finance sector (which remains one of the biggest risks to our economy), it’s that the rest of the economy has become so weak that the UK is totally reliant on this fake finance bubble. So it has to keep the bubble going forever which means finance can’t be reformed.

We in Scotland can do some things about this. The establishment of the Scottish National Investment bank is a start – so long as it is ambitious and lobbying by the Charlotte Square set doesn’t emasculate it (this is already happening).

The next step would be to set up a network of stable, customer-focussed retail banks on a mutual basis. Common Weal’s proposal for this is very close to publication.

But in truth, that still won’t be enough. We can play the game better up here, but it is London that sets the rules. And the rules are simple – banker wins, you lose. Every time.

So there really is only one way out of this. Either we limp along in this crippled UK economy and keep begging corrupt banks to make it look better than it is through fiddles and scams – or we vote for Scottish independence and build something better.

And that used to be the end of the article, back in the days when everyone agreed that one of the giant opportunities of Scottish independence was banking reform.

But now we have the Growth Commission. That report is entirely bought into the ‘profit is god’ ethos and so arrives at the profit-obsessed conclusion – there is no option but to protect the banking sector as it is and at any cost. That’s why it wants to keep all UK banking regulation; everything else has to be moulded round that imperative.

But one of the flip sides of the GERS report is that an independent Scotland no longer relies on finance trickling down from the City of London. We can leave the entire shitshow behind and be no worse off – and it would (finally) give the rest of the economy a chance to develop like it should have.

That is the real opportunity of independence – we escape the London banking mafia with one flick of a pen and we do something much, much less risky. For example making and doing useful things using enterprise and skills and investment, like a proper economy does.

Real banking reform would be popular with the vast majority of the business sector and the overwhelming majority of the population. It would be the foundation for a future, not the reanimated corpse of our failed past.

So yes, the FCA is a joke and its RBS ruling yet another national embarrassment. But we can still have the last laugh. First, we need to reject the Growth Commission’s vision. Then we need to win a vote for independence.

Or of course you could wait for either the UK to reform the baking system or for the next financial crisis. Don’t let anyone tell you there aren’t choices in life.