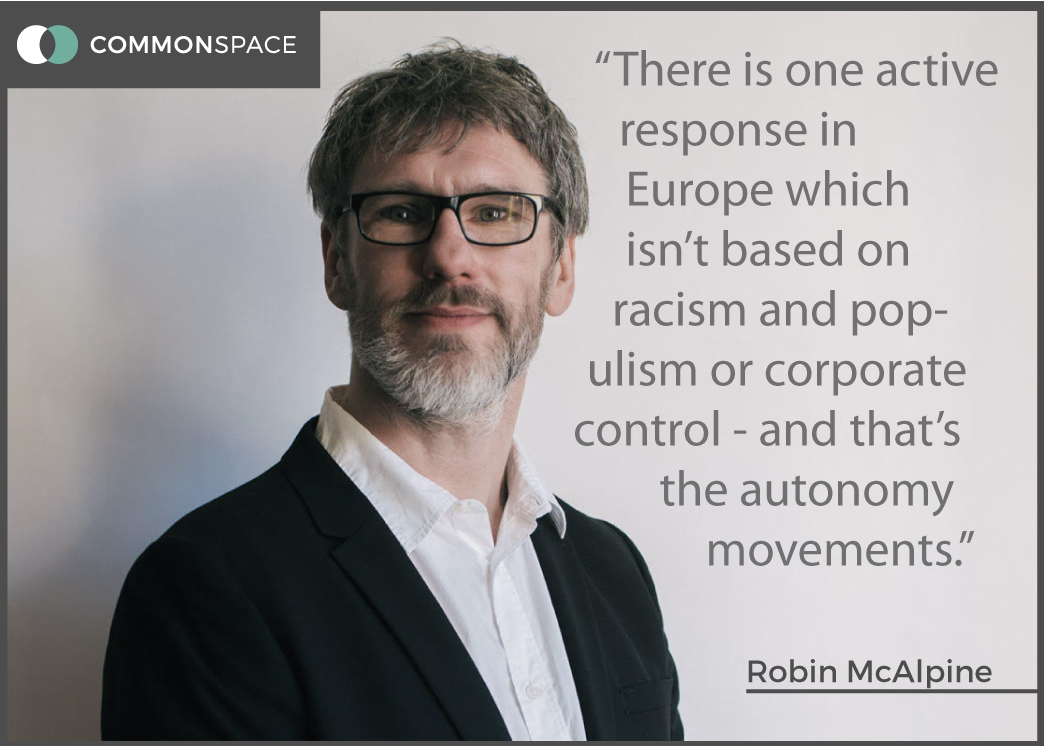 I SPENT last week in Bilbao at a conference on European autonomy movements, just getting back in time for the Democracy 21 conference in Glasgow on Saturday.

Do I feel more positive or more negative as a result? Not sure. But one thing I feel stronger about (if anything) is the situation in Scotland; here we still have hope, and that’s in short supply.

Let me start with quite a bit of misery. In Bilbao I found a series of European autonomy movements at various crossroads, each similar and yet different. The Flemish independence party is now the main party in government in Belgium – and it looks too comfortable there.

The Catalans are a little lost with momentum largely gone, uncertainty rising and some inevitable in-fighting breaking out. The Basques are in a lull, the peace process largely completed but the political process stuck. It’s been a long struggle and people seem tired.

The complexity – and baggage – that is still involved in Northern Irish politics means that the people I met there didn’t really think there was going to be any kind of ultimate solution (probably reunification) immediately. There would be another staging post, more negotiations.

And I’d love to say that, in Scotland, we’re striding forward purposefully and with a clear plan. But that would be pushing it a bit.

More optimism seems to be found among those who are smaller, those who do have a clear plan and a scale that means they can get on with it. The Faroese and the Corsicans have a strategy and are damned if anyone is going to tell them what they can’t do.

Democracy 21 (the inspiring conference which brought five or six hundred people out in Glasgow to discuss the future of democracy in Scotland) was positive and encouraging, with a really engaged audience presenting many ideas about how we could revive governance.

But if people weren’t listening to the keynote speech by Paul Mason, they should have been. Democracy is no longer our assured future. Too many young people seem to believe democracy is failing. Technology is outpacing democracy, and it is making the very, very few incredibly powerful.

The first of these two points is summarised scarily but concisely in this article by Simon Jenkins. Whether you like it or not, an awful lot of people feel that representative democracy has failed them.

And whether or not you like it, it is fairly hard to argue that they’re wrong. The ‘perfect system’ of liberal democracy was supposed to be a rules-based world designed by professionals who would seek consent for their utopia through regular elections.

If we’re honest, what they actually delivered is a travesty of this ideal. The rules are written by and for corporations (you simply shouldn’t talk about a rules-based order post-Panama Papers). The professionals got richer and the rest of us didn’t. And the system didn’t really seek or require our consent – a cross-party consensus and media domination meant we had nothing else to vote for.

I will say this over and over to anyone who uncritically defends this system of globalised rule-making, political dissatisfaction, economic growth obsession and failing welfare states – if your ‘big idea’ is so brilliant, how come after being subjected to its purest form for 30 years everything seems to have gone wrong?

Even a child can understand that if they are promised outcomes which never come, the rational response is to stop listening.

At its heart, we were promised no more financial crises because of this rules-based world. But you lied, you gave us one. And then you got rich from it at our expense – and no-one responsible paid a price.

The next time an advocate of this liberal globalised world order makes a self-satisfied criticism of Erdogan’s disinterest in the rule of law, please explain to me how much financial crime it will take before one of the perpetrators will end up in jail in Britain. Because, like Erdogan’s Turkey, law seems only applies to those who don’t control it.

And that’s the last scary point – look around. What is going well? While Macron and Merkel continue to cling to the last remnants of their liberal world order, it ends at their eastern, southern and western borders.

Britain Brexited, the Netherlands turned natavist right (and Belgium and the Nordics did too, but to a lesser extent). Spain is channeling its Francoist past, Italy is pondering this as its future. Poland, Slovakia, Hungary, Austria – the end of the liberal order in Europe isn’t a threat, it’s already close to a reality.

Beyond that there is the Middle East (not going well, unless you hadn’t noticed), authoritarian regimes in Russia and China, Trump’s America, a fractured and (for the most part) failing Latin America.

Basically there is almost nowhere left not in a crisis of democracy. We’re still talking in the future tense about a crisis which is already here.

So, to find the positive, let me begin with the assumption that ‘more of the medicine that killed us’ can’t be the solution. Macron, the Guardian and the last vestiges of upper-middle class EU evangelists think that more centralisation, more technocratic control, greater domination by corporations is all we need.

Unfortunately for them, the geopolitical reality is that they can’t find anyone to vote for them. They are living a delusion.

And then can I make the obvious point that there’s little reason to believe that the various forms of fascism-lite (sometimes not all that lite) that are replacing them are going to provide us an option for the future which isn’t, well, violent and short.

So what is there? There is one active response in Europe which isn’t based on racism and populism or corporate control – and that’s the autonomy movements. Unlike the rising authoritarian movements, the campaigns for greater autonomy are not predicated on populism, the setting of one group against another.

While the Flemish NVA are at about standard Westminster levels of anti-immigration sentiment, this is fairly mild by comparison with many. And none of these movements (from the Scots and the Irish to the Basques and the Catalans) revolve around racism or authoritarianism.

Rather uniquely, these are the European political movements that are about more democracy, not less. Where the liberals want technocratic rule and the far right promotes strong-man government, the autonomy movements want decisions taken closer to where people live.

There is a belief that people can make better decisions for themselves than are made on their behalf by others. No-one is talking about ‘expelling’ anyone from these territories after independence; the complaint is about bad government, not ‘the enemy within’.

I think this is about right. I think the blanket imposition of policies which created great concentrations of wealth while substantially increasing inequality and insecurity is the problem. I think increasing the responsiveness of government to the hopes of citizens is our best solution.

And that doesn’t just mean ‘business as usual’ but with a relocation. The democratic innovations that the smaller nations and regions in the EU have attempted (e-government in Estonia; participatory processes in Iceland; a new constitution for Corsica…) are consistent with the idea that a new settlement is needed, one which puts citizens ahead of vested interests.

Now I know the degree of contempt with which Scotland’s unionists treat the idea that Europe’s autonomy movements represent the way forward; unionists are entirely wedded to the idea that greater autonomy is the past; pseudo-fascist even.

But at some point in the very near future it is going to occur to them that whether they are Brexiteers or whether they are EU corporatists, they don’t actually have any coherent answers to the problems we face.

READ MORE – Rhiannon Spear: How Scotland is changing global minds about the nature of nationalism

No, this is not a ‘total fix’, a single solution to all our problems. But the idea that smaller units of government with internal decentralisation and which innovate participatory democracy could form a large part of the answer is far from fanciful.

Scotland is looked on by many as a missed opportunity. We could have been a testbed for this new European democracy if we’d voted Yes in 2014. We still can if we can only escape Britain’s downwards spiral.

I think we’re still the model for a potential future for Europe which does not descend into one kind of authoritarianism or another. But we’re going to have to be much more determined if we want to make it happen.

After all, the life of a pioneer is never an easy one.