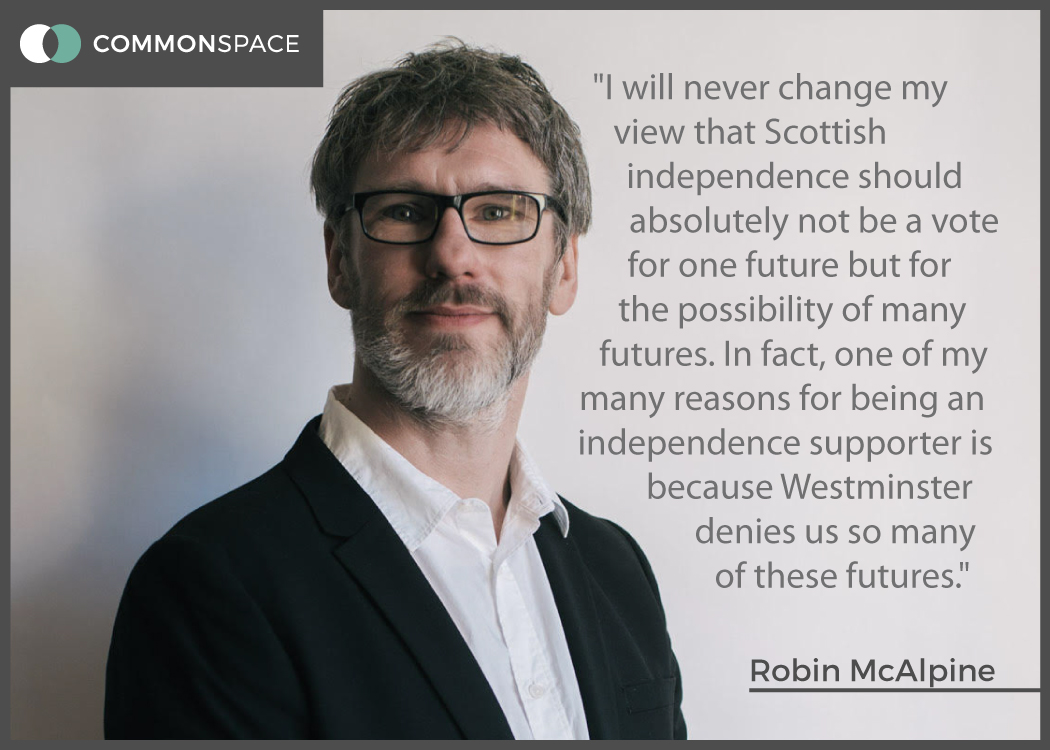 In his weekly column Common Weal director Robin McAlpine asks readers to take a fresh look at Common Weal’s White Paper Project, which he says is an attempt to plan the establishment of an independent Scottish state so that it is fit for every future, not to impose Common Weal’s vision onto the first democratically elected government

WHAT you think Common Weal has been saying about how Scotland could become an independent country may be wrong. We have not proposed a single policy to be pursued after independence day and we have not presented a single ‘left wing’ idea.

In fact, we set aside much of what we believe in to do a piece of work that would serve not us but everyone. I’d urge you; please, don’t dismiss it until you’ve had a proper look.

I didn’t really want Common Weal to start the White Paper Project in the first place. I thought that the process of trying to decide the new case for Scottish independence – how we should answer outstanding questions and what case we should make – would have best been done by including all parts of the independence movement, not unilaterally.

But when we got to the second anniversary of the independence referendum and no policy work at all had been started, we thought the most constructive thing we could do would be to make a start.

Our aim was not to present a fait acomplis but to set out a methodology and to begin to work through the big issues that Scotland would face in becoming an independent country. People who have dismissed us as ‘just the usual left’ are not being fair.

We set out two over-riding principles. First we would make no proposals at all for anything that happened after independence day, focusing only on what work needed to be done to get to that day as a proper, modern, independent country.

And second the institutions of government being envisaged must work equally well for whomever became the first government – whether it was a right-wing government or a left-wing one. If there was a reasonable policy programme of any sort that could not be enacted by a new government in the state we were designing, we would have failed.

So we started with the concept of ‘policy neutral’ – the idea that whatever we did in setting up a state would not in itself make any fundamental policy decision, that it would be technical.

We quickly realised that this isn’t really possible. Take tax – if we retained the (really bad) UK tax code, we would make a policy decision to entrench tax avoidance. If we changed it in any way, there would of course be a chance of winners and losers. Neither decision is really ‘policy neutral’.

So we changed our thinking a little. Instead of saying ‘policy neutral’ we started to think in terms of ‘future neutral’ – that this embryonic state would enable all of Scotland’s possible futures, that it would rule out none of them (subject to meeting minimum European democratic and human rights standards).

This is what drove us. We tried to create a modern country with no presumptions about its future, no presumption of the democratic choices of its people, no ‘rigging the game’ for one political ideology or another.

It wasn’t easy (there were so many radical, reforming, progressive and plain exciting ideas that cropped up during the work that we didn’t include for these reasons), but we tried. I still believe that this is the only truly democratic approach to starting a new country.

What we did next was simply to write down a list of all the infrastructure a modern, developed democracy needs – from roads and schools and hospitals to international trade relationships, customs and excise systems and a currency.

READ MORE – Robin Hall: This book can help get us prepared for Scottish independence

We then went through the list (with a lot of expert help) and put things into one of three categories – we already have this and don’t need to do anything, we have this but it will need to be adapted for independence, or this is simply missing and needs to be created.

Then we contacted experts in all the areas we identified as needing extra work and asked them to tell how it could be done – always sticking to our ‘future neutral’ rules.

How do you build a currency, a central bank, a foreign currency reserve, an electronic payments system? How do you write a constitution, build a tax system, sort out border arrangements, adapt IT systems?

What does it take to set up a customs and excise service, to negotiation membership of international organisations, to build a Scottish Defence Force, to start a social security system? How should we approach negotiations with the UK? How do we get all the work done properly and on time? How do we find the right people to do the work?

Over 18 months (and with an enormous amount of help from many, many people sympathetic to Scottish independence), I think we answered all of these questions and more. (Well, in some cases as best as they can be answered – the sheer chaos of Brexit makes certainty a thing of the past…)

And if you’ve heard people saying that we’re ‘just the usual lefties’, then I’m confident they’ve not read any of this work. Seriously, you simply could not mistake the paper in which we scope and cost the adaptation needed to Scotland’s public sector IT system on a department-by-department basis for the Communist Manifesto.

READ MORE: The 3 steps that could take Scotland to an independent currency

But we soon realised that it would be a true masochist who read their way through every one of these policy papers, so to try and make it easier for people to get an overview of all this work we wrote it all up in one (comparatively) easy to read book. It’s not even 200 pages – if you believe in Scottish independence I’d urge you to consider dedicating the time to it.

If that’s too much then we decided to write a shorter version – a book with less of the detail but half the length.

And if you’re still not sure, I really do urge you to have a look at our three papers on a Scottish currency – on how to set it up, how to create a central bank and how to build up a foreign currency reserve.

Between them they’re only about 30 pages and you don’t need to remember all the detail – you can skim them. But once you’ve finished you’ll have a much better sense of what is possible and how we could achieve it.

If there is a slightly heated debate inside the independence movement just now, it just isn’t fair to see Common Weal as having fuelled it. We tried everything in our power to do the right thing, to make a constructive contribution which put the needs of independence ahead of our own views.

REPORT – Foundations for Freedom: A discussion paper on the process for establishing an independent Scotland’s Constitution

I fear that the heat is meaning people are dismissing or even attacking this work without properly understanding what is in it. Some seem to think we’re trying to hijack the agenda for ourselves when the opposite is true.

I will never change my view that Scottish independence should absolutely not be a vote for one future but for the possibility of many futures. In fact, one of my many reasons for being an independence supporter is because Westminster denies us so many of these futures.

Let us – together – design a country fit for everyone who lives here, rich with real democratic opportunity and choice. Let’s not make independence conditional on any one programme of government being enacted.

Please consider taking a fresh look at this work. You may find its much closer to what you believe in than you think.