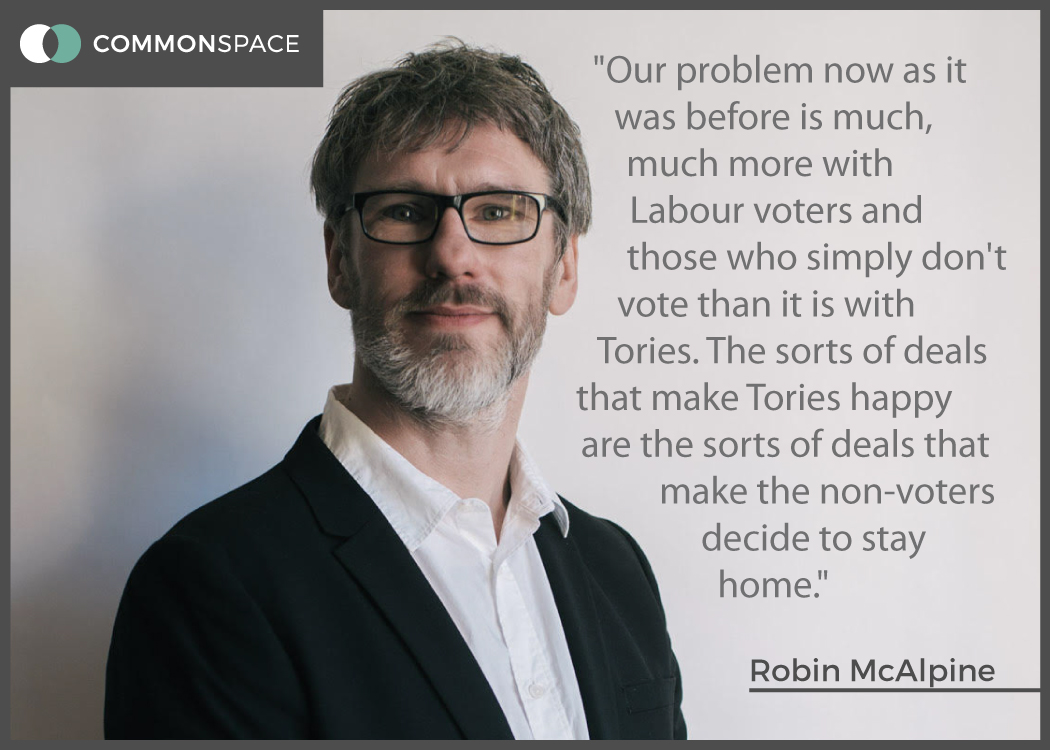 NOW that Brexit is going so well and Westminster politics has proved itself to be both effective and harmonious, it might be time to try and draw some conclusions about what the Scottish independence movement ought to be learning from the experience.

1. Consensus is nice; majorities are essential

If you asked Westminster if it wanted a cup of tea, it would be unable to form a majority in favour – or against. The ‘coffee not tea’ lobby would soon be at war with the ‘tea not coffee’ lobby each of which would themselves be split between the various ‘with milk’, ‘without milk’, ‘one sugar’, ‘two sugars’ lobbies and so on.

There’s an idea afoot that the answer to belligerent populism is soft consensus – that the way to beat despots and win power is to offend no-one and try and be liked a little bit by everyone.

Thus it appears that some indy supporters have actively unlearned what we learned since 2012 – that coalitions in Scotland don’t start with the Tories. Hence the tiny flurry of ‘we need Tory voters’ letters in the National.

Now if there is a kind of ‘Better Together’ pitch for indy which would lead to the SNP and the Tories appearing together in smiley publicity shots without sickening off the rest of us, I’d be delighted to hear it.

But there isn’t. We need a pitch that wins at least 50 per cent of Scotland plus one. A total of about 12 out of every hundred voters voted Tory in 2016. That has been shown over and over not to be the right starting place for a political majority in Scotland.

Nothing happens if we’re fragmented and divided. First, we must be together – and to get Scottish politics together you don’t start at the right end of the political spectrum.

If we end up with the SNP courting the Tories, Labour convincing itself that this proves it was right all along and the vast left-of-centre non-party aligned part of the independence movement demoralised and demotivated, we too will be unable ever to agree on a cup of tea.

2. Soft and weak are often synonyms

What do soft Brexiters want? Well, not Brexit. Their ‘softness’ is in fact weakness. They lost, they were Remainers and now they’re clutching at straws.

And no-one likes them because they are neither one thing nor the other – not believing one thing and no longer courageous enough to fight for the other thing. They are weakness and fudge in human form.

One of the more surprising developments in Scotland in recent weeks is the re-emergence of ‘soft independence’ as a strategic proposal. This is surprising because of how poorly it worked last time.

READ MORE – Explainer: How could Theresa May be evicted from No 10?

As you will remember, the last independence campaign kicked off on a ‘you won’t notice any difference’ pitch. This was driven by a deeply flawed belief that ‘the affluent middle classes of Edinburgh’ were the key and that they would only vote for continuity.

As you will also remember, the ‘take a big risk so that nothing changes’ strategy didn’t even nearly work. The campaign was relaunched from the grass roots as ‘another Scotland is possible’ (with various forms of different Scotland being proposed).

And what do you know? It nearly worked. In fact, it was the only thing that worked. No-one likes soft Brexiters. No-one is going to like weak independence. Why are we wasting our time with this failed strategy again?

3. The more you ask for, the less you get

It was pretty clear that the Brexit negotiators started out with no strategy, making it up as they went along according to what one faction or another would let them away with. The Eurocrat negotiators watched on with a grin, like a cat waiting for a cornered mouse to make a move.

Negotiation isn’t a random process; there are some basic rules. Right at the top of that list of basic rules is the fact that the more that you need out of negotiations, the weaker your bargaining position is.

The 2014 independence White Paper is now unfairly maligned – there were flaws, but compared to the Growth Commission it is Nobel Prize stuff.

But there was one very big problem; it required us to get agreements from rUK on a wide range of issues and we had no Plan B, no ‘walk-away’ solution. It wasn’t just currency, it was a whole range of sharing agreements without which an independent Scotland couldn’t have operated.

Our negotiators would have had to crawl into negotiations on their knees. They’d have been wheeled out on gurneys. We were so reliant on Westminster saying yes to so many things that we’d have found it very hard to say no to anything. We’d have been picked apart.

Common Weal’s White Paper work was based on a number of key philosophies, and one of them was ‘what does a modern nation state need to function, and how can that be delivered in a self-sufficient manner?’.

The corollary of this (entirely intentional) was that we’d go into negotiations asking for very little other than the UK’s recognition. That’s strength. That’s what an independent Scotland should be aspiring to.

4. There is no substitute for a plan

We now know the real problem with writing your manifesto on the side of a bus (“£350 million for the NHS!!!”). The problem is not honesty (all campaigns bend the truth); it’s that you might win and then what?

The thing is, Brexit has always been a right-wing pursuit but with the knowledge that there just aren’t enough right-wing voters of a Brexit mind to win a referendum. There was no plan during the referendum so that everyone could pretend that they were voting for what they really believed in.

It worked, but the legacy is an utter disaster because now there is the aforementioned lack of majority for, well, anything.

I have nothing but contempt for ‘confusion marketing’ as a political strategy. I believe you should say what you mean – and really mean it.

Our recent descent into ‘here’s a report – don’t worry about the words in it because it can mean whatever you want it to’ is just a wordy version of writing 350 million on a bus. What are we going to DO? How are we going to set up the institutions of a modern nation state and what will it look like when we’re finished? That would be a plan.

Last time round people said things like ‘don’t worry about it, Alex Salmond is a master negotiator and he’ll just sort it out’. It doesn’t matter how accomplished a politician he is, they can’t make someone else do whatever they want them to and they all make mistakes all of the time.

And looking forward, telling people ‘don’t think too much and trust our leaders’ was more convincing a couple of years ago before the single biggest policy initiative of this current administration (an unnecessary and unpopular reorganisation of education) came completely off the rails.

I mean, if you can’t outfox Richard Leonard and Willie Rennie, I don’t fancy your chances against UK negotiators hardened by their experience of being humiliated throughout the Brexit process.

Making it up as you go along is fine in comedy improv (and even there I have my doubts), but it is a woeful approach to complex negotiations.

If we don’t have a detailed plan for how we’re going to start this new country of ours, we’ll just sleepwalk into exactly the same catastrophe that the UK is sleepwalking into now.