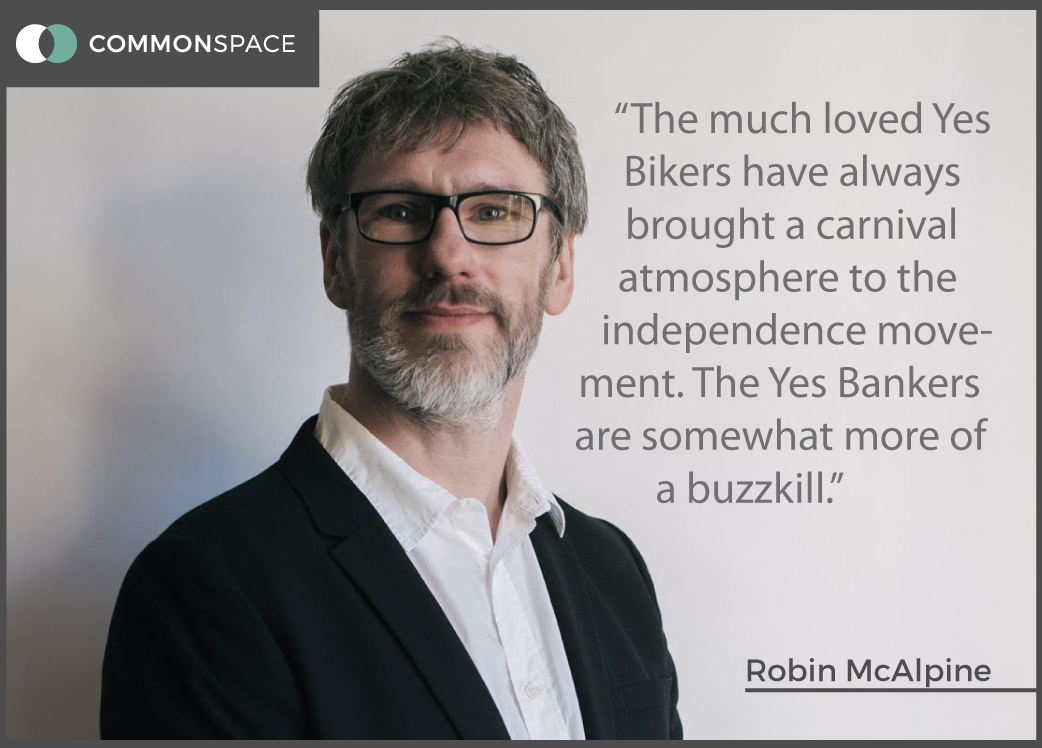 Robin McAlpine argues that whatever you think about the economics in the SNP’s Sustainable Growth Commission, the political strategy is doomed to fail because it is not based on any data-based analysis of who we need to convince and how we need to convince them

YOU’LL have had your discussion then – how was it for you? Despite the promise that the Growth Commission report was the start of a discussion, the full force of Charlotte Street Partners’ lobbying and PR power has merged with the machinery of the SNP leadership. This is now clearly a three line whip.

But before we all form an orderly procession and march straight off the end of a cliff (urged on by Edinburgh’s banking elite, who are notably standing well back from the edge themselves) could we at least try for some informed debate?

Common Weal doesn’t get the kind of privileged access to power enjoyed by those with whom we are trying to debate, so all we can do is continue to put some careful, diligent work into presenting some reasoned evidence in place of the unfounded certainties which are kicking around now. Last week we published a measured set of concerns about the contents.

What makes proponents of the Growth Commission so certain it’s working? Anecdote? Closing their eyes and thinking really hard about it?

As far as I know, the only substantial public attitude research carried out on independence since 2014 has been done by the Scottish Independence Convention. Without some serious research behind them (which was not part of the Growth Commission methodology) you should be very suspicious indeed of anyone telling you ‘this will definitely…’.

Who are our shiny new voters?

We’ve tried to make this point before (read last year’s data here. we’re publishing an update shortly); there aren’t that many affluent upper-middle class voters in Scotland. If we successfully managed to win over every single person in the country who earned above basic rate tax, it still wouldn’t be enough to close the polls even by half. We’d still lose.

REPORT: The Demographics of independence

By absolutely miles, the mainstream vote in Scotland is people who pay basic rate tax. They break into categories – young, old, female, male and so on. Let me point out some of the big groups we need to win.

We need to win the young and maximise turnout. They were attracted by the option of change and optimism. (Did someone at the Growth Commission overhear someone saying ‘austerity get’s the kids out on the streets’ and misunderstand?)

We need to get a better turnout from the public sector workers who were (ironically) worried last time that there might be austerity after independence.

We need low income pensioners who feel financially insecure. We need woman who rely on public services (and who have been by far the most hit by austerity). And we absolutely need a big turn out of working class voters.

Now I know that upper-middle class strategists hold one dogma to be true – the poor don’t matter, they’ve got nowhere to go electorally-speaking, government is about the affluent and so on. Even if that is true in constituency elections because of concentration of where the poor live (and that’s not even true any more), it definitely isn’t in a referendum.

I just shouldn’t have to make the case that one of our two big battles is with apathy and antipathy (one we won last time round). I’ve heard people saying that the Growth Commission austerity pitch won’t lose ‘all that many working class votes’.

Dear god, are we already counting all the imaginary (and seemingly superior) affluent middle class voters that are flooding towards us that we’re already waving our current voters out the door with a jaunty ‘so long’? You know a working class vote is worth as much as a middle class vote, right?

Personally I’d have thought that we were not in the business of shedding votes at all given that we’re behind, but what do I know? Oh, and what will happen when all those EU voters discover that there is no re-entry into the EU under Growth Commission rules?

The much-loved Yes Bikers have always brought a carnival atmosphere to the independence movement; the Yes Bankers are somewhat more of a buzzkill.

One of the few things we very specifically had the facilitators explore with participants in the SIC focus group work (mostly these sessions were designed to follow what the participants were saying) was about the place on the optimism/pessimism scale inhabited by the Yes campaign.

We explicitly asked whether Yes had been too optimistic, whether a more pessimistic case would have persuaded the wavering No voters (these were soft No voters, not the most committed unionists).

The answer seemed quite clear; almost every single participant irrespective of how they voted hated the negativity and arrogant tone of the No campaign. Every single person expressed a liking for the positive, optimistic case of the Yes campaign.

In fact, one of the biggest motivators for people who were still No to doubt whether they’d done the right thing was a sense of guilt that they had rejected the optimistic option. Most people want to believe that the future is going to be better. We like to think we’re on the side of progress.

The message was actually quite clear – there are two axes. One runs from optimistic to pessimistic and people really liked where we were on that scale. But there is another that runs from ‘we believe you can pull this off’ to ‘we think this is never going to happen’, and we weren’t just quite far enough up that scale. Not by much, but enough.

What people say they want is to believe that optimism is possible, not to give them more misery. We need to reinforce the optimistic case, not abandon it. And that is particularly true for key groups like the young, women and the working classes.

Another finding was that people are ‘future discounting’ – simply setting aside altogether what politicians are saying about anything other than the immediate future. Let’s be clear; Trump or Clinton, Brexit or Remain, Tory or Labour – no-one ISN’T promising a better future in the medium term.

Five years is a fantasy zone for most people. They don’t believe what you tell them about things that happen that far into the future (this is partly why all the projections in the world about how bad Brexit is does not shift opinion polls right now).

Saying to someone ‘accept ten years of austerity and you’ll get £4k in 25 years’ is actually laughable. I’m a spritely 45-year-old; I’ll be 70 when the Growth Commission delivers its ‘average small country’ bonus. And that’s if we started today.

By far the biggest lesson of all current thinking on marketing and influencing is that it is about stories. If you don’t tell a story about people which puts them at the centre and is about their life as it is lived now, they’re not listening. They’ve heard the future projection stuff. It didn’t come true.

‘You might be able to type this stuff George, but you sure as hell can’t say it’

This immortal line was Harrison Ford’s response to George Lucas’s original script for Star Wars. He is pointing out that when you write things down on a bit of paper they seem quite different than when you say them out loud.

How do you ‘say the Growth Commission’ out loud? What story does it contain? How do you sell it? You can keep denying it is austerity all you want – it is austerity. From the IFS on the right to Common Weal on the left, not a single external commentator has denied this.

In fact, a unionist blogger did the maths on what Growth Commission rules would have done over the Tory austerity years and it would actually have been worse. We quickly ran the numbers to check – and I’m afraid to say he is right.

So what’s your doorstep pitch? If it’s based on ‘deny, deny, deny’, you’re in trouble. I’ve heard people saying that public sector budgets will expand because they only have to be one per cent below GDP growth. But this is simply dishonest; that’s the cap, the maximum that can be spent. There is an additional deficit reduction target ON TOP OF the ‘lag GDP growth’ commitment. You will not get away with it.

I could pose you five perfectly reasonable questions about how this whole system would operate (fundamental, central ones like who sets monetary policy?) and you couldn’t answer them.

The entire Growth Commission report does not read like something that has been produced by people who have had a lot of doorstep experience. I’m sure that when they typed it it made enormous sense. But as an activist, you sure as hell can’t say this stuff – if you want to win.

The eerie sound of silence

Hear that muted sound of our unionist opponents being suspiciously quiet about the weaknesses in the report? That’s the sound of ‘never interrupting your opponent when they are making a terrible mistake’.

Unionists are begging us to adopt this policy. I know the almost endless lines of attack they will have if we do. It ought to unsettle you.

This shit just does not win

Finally, what more can I say about the fundamental belief that voters first and foremost want to know that the powerful, the wealthy and the establishment are happy. That represents ‘credibility’ and gives the punters permission to be enthusiastic about austerity. That’s the core strategy of the Growth Commission.

It assumes that you don’t talk about people’s lives, you talk about big national macro-indicators – which is a more reliable stand-in for the real experience of how people live than their own experience. You don’t answer their questions so much as assure them that government will be run by a professional class who will do what is in their best interests (whether they understand it or not).

It is exactly the Remain campaign (except in this case on some kind of steroids). It is Hilary Clinton’s campaign. It is the campaign run by the Eurocrats in Italy. It is ‘lowest approval ratings for a new President EVER’ Emmanuel Macron’s campaign.

For reasons which are beyond me, we have looked round the world to identify exactly who is losing and why – and we are copying them. It’s like there is no sensible lesson we’re willing to learn.

So for this reason, all the others above and the many more I don’t have space for here (like ‘has everyone realised there will be no cross-party Yes campaign and that this is now a wholly-owned SNP campaign?’) – please don’t just dive into making baseless strategic assumptions because someone told you that No voters like austerity and bankers.

Or, at the very, very least, ask them for some evidence that this is true and interrogate it closely…