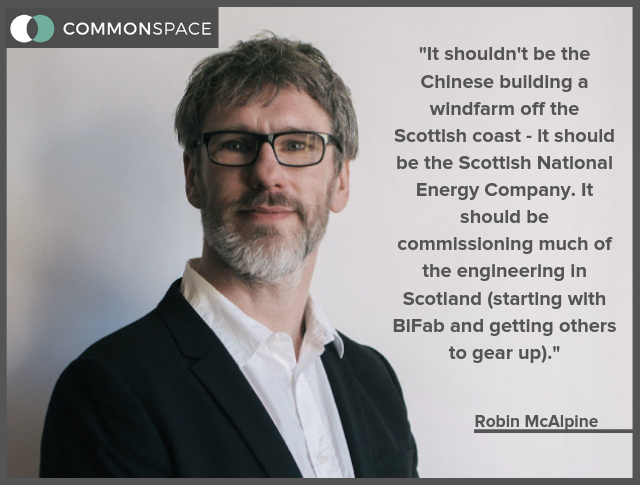 WHAT is more fundamental than your economy, your land, your energy system, your housing – your country? These (along with your people) are your biggest national assets. You should treat them with the respect they deserve.

So why doesn’t Scotland? At times we give the impression that we’re organising a bulk sale of our own grannies. Day after day the fabric of our nation is sold cheap to anyone with money.

For context, rub your eyes and get your head round the following; the Global Competitiveness Report assessed how foreign-owned 137 national economies are. The number one most foreign-owned economy in the world? Some struggling African state with large mineral resources?

And the quickest way for the UK to drag itself off the bottom of the world table of domestically-owned economies would be Scottish independence. We would almost certainly, in one fell swoop, overtake the UK as the world’s most foreign-owned economy.

The price of this is high. The UK is also (really, by a long way) the most corporate-owned economy in Europe. That’s kind of inevitable because foreign ownership means corporate ownership (or sovereign wealth funds).

And corporate ownership brings many things which are not good for a host economy. These are numerous (you can read more here]. But they are largely to do with headquartering and supply chains.

Corporations generally keep their R&D spend, their top jobs and much of the high value part of their supply chains close to home. And of course these are the aspects which really drive a productive economy. Host nations tend to get the low-pay jobs and, by definition, in each case they become net exporters of their own wealth.

The UK is so bad for this because it is one of the few countries which actually believes its own rhetoric about free markets; the US talks the talk but is, in reality, highly protectionist when it comes to its own businesses.

Not really. Let me give you some examples. Earlier in the year when we were scoping out the transport element of the work we’re doing on a Green New Deal we pointed out that a Scottish company is way ahead of the game on decarbonising bus transport. It was a win-win to commission a new fleet of hydrogen-powered vehicles.

But a Scottish company is no longer ahead of the game – a Canadian company is. Because the Falkirk-based and formerly Scottish-owned Alexander Dennis has been sold by its Scottish owners to a Canadian corporation.

As far as I can see, not a single politician raised a peep about this and the trade unions contributed little more than a plea for job guarantees.

You might reasonably argue that the Scottish Government has very limited powers in this area (though a company with a £600m-plus turnover was sold for just £320m and there is good reason to have considered a public bid). But what about when it does have powers?

One of the most concerted arguments from members of the SNP is that if only Scotland had been independent we could have managed our oil resources like Norway – in public ownership.

I know just how committed to this argument SNP members are, not least because they’re spot-on right. But it would ring a little less hollow if their own government wasn’t following precisely the same path with our new energy goldmine – renewables.

This week we’re (I think) all supposed to be dancing in the streets because we’ve sold off another giant chunk of our off-shore renewable energy resources to a Chinese multinational company by granting it the planning permission.

READ MORE: Rebuttal: Is the Scotch Whisky industry really ‘ours’?

I don’t know if the Scottish Government has negotiated any kind of deal to bring any of the manufacturing here, but on past record I’d be pretty surprised if they did. Virtually none of Scotland’s renewable energy resources are publicly-owned and over half are owned by non-UK corporations.

The Scottish Government seems to treat public ownership as a last resort. It bought Prestwick Airport to prevent it from closing down but did nothing with it and is now privatising it again.

Meanwhile the great sell-off of Scotland reaches a new phase with an SNP-Tory-corporate-lobbyist coalition just making sure that Edinburgh city centre can be flogged off to AirBnB. In the same week a swathe of major Scottish-owned hotels stop being Scottish-owned hotels.

When it comes to public procurement, it seems to be utterly impossible to move Scotland from a far-end free-market ideology. For more than eight years now I’ve been campaigning on procurement reform to allow smaller, domestic businesses to get a fair share of public spend.

In fact at one point I thought we’d won – everyone (including the Scottish Tories) was on board and the case was air-tight. To my amazement, the government implied it was persuaded but then went silent and then changed nothing at all.

Likewise the pseudo-PFI of the Scottish Futures Trust. We’re meant to believe that the fact private profits are capped means this is a ‘good’ system. It’s no such thing; its a system for handing out corporate monopolies on public infrastructure for as long as 25 years via a system that excludes smaller businesses.

Common Weal’s proposal for a Scottish National Infrastructure Company to replace this system and focus on a more equal distribution of public spending with more going to Scottish businesses was overwhelmingly passed as SNP policy – but it looks like it is being disregarded by the Scottish Government which is instead running just an ‘infrastructure commission’. Expect little change.

There are times when I feel that no-one cares about this other than Common Weal. We’ve produced a string of reports explaining how to improve rapidly the domestic ownership of our economy and the public ownership of our essential public infrastructure.

It shouldn’t be the Chinese building a windfarm off the Scottish coast – it should be the Scottish National Energy Company. It should be commissioning much of the engineering in Scotland (starting with BiFab and getting others to gear up).

A National Housing Company should be shifting the ownership of land for housing away from the big developers and towards a public-good, properly planned system of place-making.

A National Land Agency should be breaking up all those massive (and mostly foreign-owned) grouse moors, and enabling domestic land-based industries (and a large publicly-owned forestry industry) a fair chance of getting somewhere to grow from. Our trains should be publicly owned.

And we believe that Scotland’s economy should be driven by an investment-led model with a very high degree of ‘local wealth building’ to benefit Scottish businesses and workers, not a growth-based model which benefits Amazon and Walmart and Iberdrola and Abellio.

And yet, like sand through our fingers, Scotland looks on as the few remaining national assets got snapped up by foreign speculators, flogged on the cheap with no thought given to Scotland’s national wellbeing.

We’re not stuck with this forever. We can nationalise that Chinese windfarm – but it will cost us much more than if we just built it ourselves. We can break up the grouse moors later – but those valuable tree crops won’t be growing until we do. We can fix our crooked procurement rules – but day after day the Scottish Government is signing up 25-year exclusive deals with the corporations.

Scotland likes to kid on that it rejected the Thatcher revolution. But congratulating ourselves on not privatising Scottish Water and rejecting internal market reforms in the NHS is blinding us to the wider reality.

Scotland doesn’t seem to have the self-respect to either hope or demand that we have any domestic or public ownership of our national assets or our economy. We have been paying a high social price for this lack of self respect. It looks like we’re going to be paying that price for quite a long time to come.