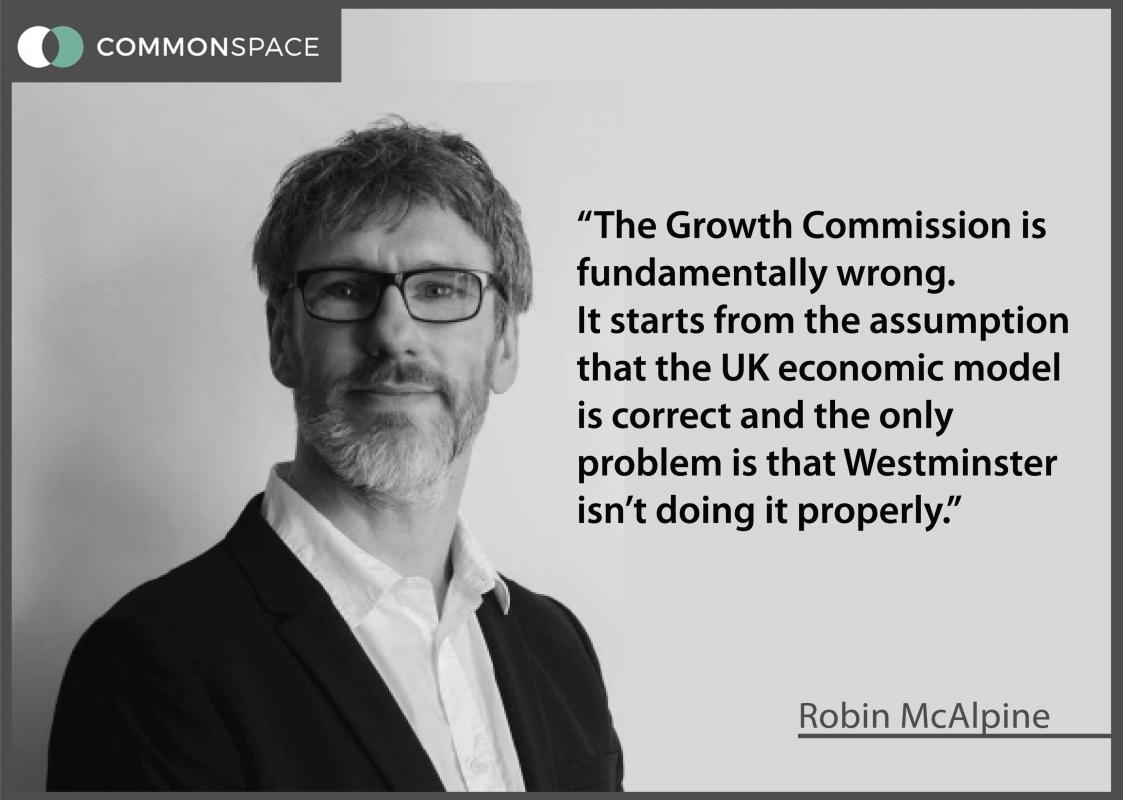 I DON’T WANT to be here and I don’t want to be in this position. Common Weal is all about making constructive contributions and working with others collegiately to get good things done. We don’t want to be oppositional; we don’t spend our time being against things but for them.

Then came the Growth Commission, and sometimes in life you just have to say no, there is no version of this that’s OK, there’s no way to engage constructively, this needs to be opposed effectively.

That is why Common Weal has put in an absolutely inordinate amount of work over the summer to shine a light on the reality of the Growth Commission’s report and to show that there are (much more sensible) alternatives.

The Campaign for a Scottish Currency is ongoing, but we’ve done what we can. Now its over to you (if you’re in the SNP and you got a place at one of the assemblies). You can let this happen or youcan stop it. This is why you should stop it.

One of the standard tricks of the lobbyist is what I call (usually less politely) the ‘large chunk of fecal matter’ trick. What you do is you drop a giant chunk of excrement on the table and tell everyone ‘it’s only a starting point for discussion – feel free to chop away’.

Why’s it a trick? Because, however much you chop, what you will end up with is a large chunk of fecal matter. When something is fundamentally wrong the correct response is to discard it and pick an alternative or start again. The wrong thing to do is believe that you can fix it with some changes here and there.

So start here; do you want to embed an almost exact replica of the UK economy on day one of an independent Scotland? If not, don’t chop – flush.

Yes, this stuff is complicated – but that’s no excuse

I did not study economics at university, and certainly not monetary economics. It has taken me many years to learn since and it is not all easy.

I’ve heard people take advantage of this by being less than honest. For example, I’ve heard people say that ‘Germany doesn’t have its own currency’. This is completely untrue – Germany is an equal partner in the Euro and has a central bank with legal responsibility to protect the German economy.

The countries which don’t have their own currency are Panama and Ecuador (US Dollar), Montenegro (Euro) and Lichtenstein (Swiss Franc). Every single major economy is either in a formal currency union or has its own currency.

Monetary policy is complicated and I most certainly feel your pain at being asked to sort out these questions. But ‘complicated’ is not a synonym for ‘can mean whatever I want it to mean’. Long-term Sterlingisation for Scotland is insane

Facts are chiels that winna ding

So what are some of the things you need to know? Well, Sterlingisation is not a version of a Sterling Union any more than a grapefruit is a version of a grape.

You cannot join the European Union unless you’ve had your own currency and central bank for three years prior to application to join. If you apply the Growth Commission rules to the real-world data from 2009 the result would be slightly worse austerity than imposed by George Osborne.

In neoclassical economic theory (what is often called ‘mainstream economics’) there is a wide range of tools you can use in the event of economic or financial crises. Almost everything on that list is only possible if you have a central bank with power over currency.

You can claim that the Growth Commission rules would have prevented Tory austerity but a calculator, the basic economic statistics from the last ten years and some fairly straightforward arithmetic will prove that in fact it would have been worse.

You can claim that countries that don’t have the monetary policy powers that come from having a currency or a formal currency union have survived economic crises but since those are only Panama, Ecuador, Montenegro and Lichtenstein it’s hard to stack that argument up.

And so on. Please make sure the Scottish independence movement is on the right side of truth.

This is not about left and right

Some would like you to believe that the only people who don’t like the Growth Commission also sell copies of the Socialist Worker. This is absolutely miles from the truth.

The theories which underpin the entire modern economic system are hardly left wing. They all assume that a country has to be able to manage price stability (i.e. inflation), international exchange rates, liquidity (the availability of money in the economy), risk (regulating finance to ensure economic stability) and so on.

Those theories also assume the capacity for emergency measures in periods of crisis such as quantitative easing, bank bailouts or (potentially in extreme cases) capital controls.

These aren’t left wing theories, they are more like centre right theories. But a Scotland in long-term Sterlingisation would have power over precisely none of these. Not one.

On the key question of the money system this is not left versus right, it’s sanity versus insanity. Not a single modern advanced exporting economy like Scotland’s has ever existed for so much as a day without a formal monetary system (the Growth Commission proposal). Draw your own conclusions

Another line I’ve heard trotted out is that this is the ‘only option’. But this is not the only option and not by a long way.

Common Weal has shown that a politically-neutral monetary system specifically designed for the needs of the Scottish economy can be put in place in time for day one of independence. Why is this not up for discussion at the assemblies?

Common Weal has published a major paper explaining why the ‘deficit reduction’ mania of the Growth Commission report would be bad for Scotland’s economy in the early years of independence and explains what a different approach would look like. Why is that not up for discussion?

And we’re shortly going to publish a very major piece of work on a different strategy for economic development in Scotland after independence based not on protecting the UK banking sector but rather focussing on investment in the real economy.

There is plenty material out there on better forms of economic development than the Growth Commission and which much better reflects the views of the vast majority of SNP members. There are lots of people who can talk about it with knowledge and passion. Why can’t assembly-goers hear their side of the story?

In fact, if the Growth Commission is such a great idea, why is so much effort being made to present it as the only game in town? Might it be because, given the choice, few SNP members would chose the UK’s banking regulations and tax code?

Scottish Labour currently sleeps with the fishes because it came to believe that the world owed it something and that it could stop working for our votes. It was wrong.

You can say deficit reduction is not austerity, you can say that public services are less important than the banking system, you can say that the TOTALLY BEAUTIFUL GROWTH COMMISSION IS MAKING SCOTLAND GREAT AGAIN AND EVERYONE ELSE IS FAKE NEWS (SAD!).

Despite being an initiative from some good friends, I argued against the establishment of RISE and I did so both in public and private. Never mind the problem with timescales, I believed the SNP had earned the right to show what it could do as a left-of-centre reforming government with a vision for Scotland.

If the SNP adopts the Growth Commission economic strategy I think it would be entirely legitimate to describe the party as centre-right. And there would be consequences, serious consequences.

So if you think that the world owes the SNP something and that Scotland is obliged to swallow whatever the party tells us to swallow, fair enough. I’m sure Scottish Labour would like the company down there.

As I began, at times over the summer when everyone else was lying in the sun the Common Weal team was working really, really hard to do everything we could to fight for Scottish independence and the future of our country by exposing the catastrophic flaws in the Growth Commission report.

I don’t know what more we can do; its in your hands now and you must answer to your conscience for the outcome. But I can implore you, one more time.

First, make official party policy to start a Scottish currency from day one of independence. Second, make it a precondition that any policy should make ‘every future Scotland’ possible and not hijack the entire country for 15 years of undisputed rule by bankers.

And third, say loudly and clearly that you don’t believe in Scottish independence just to replicate exactly the damned UK economy you wanted to escape in the first place.

Yes, if you do these things there’s basically none of the Growth Commission report left. But that’s because, fundamentally, you never believed in it in the first place.

So have the clarity of mind and courage to say so.