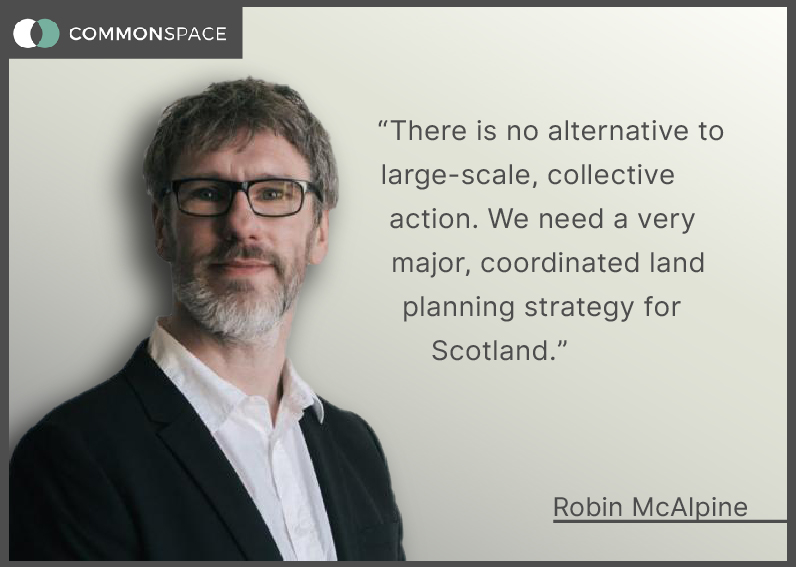 SUDDENLY, on Monday next week, Scotland’s countryside will burst into productivity. Having resembled little more than a scrubby desert for most of the year, overnight it will spring into action, flooding ‘wealth and vitality’ into rural areas.

It’s productive outputs will largely end up in mass graves and the paltry number of jobs created don’t even pay a living wage. Almost every possible alternative use of the same space produces much greater economic impact. But there you go, them grouse ain’t going to shoot themselves.

In this sorry tale, and in the saga of politicians simply too scared (or complicit) to do anything about it, we observe a good cross-section of what’s wrong with modern Scotland.

Because there’s a different version of this country. It could be a country which decides that yes, climate change is real and our need to do something about it is very real indeed. We need, collectively, together, to rebuild, redesign, reinvigorate our nation. And we need energy and materials to do it.

Energy and materials that Scotland should have in abundance. A booming, thriving rural community of land-based industries driving our economy, creating wealth and wellbeing, revolutionising how we build, how we heat our houses, how we keep electricity flowing to our homes and businesses.

We should be building a nation much more self-sufficient on food, with the quality of what we eat matching the quality of the remarkable soils and waters of the place in which we live.

If you don’t know what I’m on about, Monday is the 12th of August, the start of the grouse shooting season. For much of the year shooting estates have been eradicating any wildlife that isn’t a grouse (or a poor sheep doused with chemicals to wander around and act as a ‘tic mop’).

There’s a mass slaughter of the magnificent mountain hares and the murder of glorious birds of prey. You look at a photo of the lifeless body of a brutalised but still somehow resplendent eagle and tell me you don’t feel the fury I do.

This and much more (please have a look at this video by Revive if you don’t know what happens on a grouse moor) is all done to maximise the number of birds which can be shot by wealthy tourists willing to pay ludicrous sums of money.

The moral case against grouse moors is as plain as the nose on your face. This is the 21st century – we don’t have dog fights, badger baiting or cock fighting anymore, so why this abomination?

But I’ve recently come to realise that the moral case against grouse moors (and the wider need for land reform) pales in comparison to the sheer utilitarian need. Let me put it as bluntly as I can; any feasible Scottish response to our global environmental crisis needs land.

Common Weal is working as hard as we can to get our work on this finished, but the picture is becoming clear for me. We have a series of tasks and they’re largely engineering tasks. All of them need material inputs and many of them can be produced in Scotland.

But it’s more than that; one of the truths about tackling climate change that is seldom admitted is that unfettered global trading patterns have to change. Hauling goods round the world to take advantage of cheap labour (but not reflecting the ‘externalities’, the costs of the harm done) is a big part of the problem. We must become more self-sufficient – every nation.

And it’s not just climate change. In fact, many experts will tell you that there are two or three major threats to humanity that are likely to hit before the full impacts of climate change, such as the collapse in pollinators resulting from large-scale extinction throughout the animal kingdom.

Let me break some of this down for you. We need to improve the energy efficiency of Scotland’s housing stock. The material inputs for that should be fibreboard and cellulose insulation, tapes and membranes for draught proofing and various timber materials, including for replacement windows.

And yet, at the moment we import most of these products (and they’re bulky and heavy). These are forestry products, but we have one of the lowest rates of forest cover in Europe (the average is about 35 per cent and we’re at about 17 per cent, while Finland is 85 per cent).

We need to greatly increase our supply of energy and renewable heating. Energy will require a proper land-use strategy to integrate wind turbines into multi-use strategies for the land on which they sit. We will need a lot of land dedicated to solar thermal and solar PV generation.

We need land on which to grow food, because it is imperative that we have a more self-reliant food system, not least given the future threats to continuity of supply – there are many places we rely on heavily for imports which are likely to be hit by serious and harmful weather events.

And yes, Scotland’s prime arable land is largely in productive use already – but not all of it. Small or awkward patches of productive land in larger landholdings are often just considered ‘not worth it’, where a smallholder would make much better use of it.

In any case, we need to start looking seriously at indoor growing with artificial light. It is now economically viable for Scotland to become self-sufficient in many food stuffs all year round if we grow inside, but we still need land to build the facilities.

As well as solar thermal, if we’re going to decarbonise Scotland’s heating then there will be places that will need a lot of biomass generation – timber crops used to make fuel. We need to coordinate the production of these crops so they are produced close to where they are used.

And we must use less impactful construction methods. We need to use much more domestic timber-based construction products – for example using more cross-laminated timber for structural purposes (see the amazing ‘plyscrapers’ which are emerging all over the world).

On top of this we need massive investment to transform agriculture, to make it more regenerative so as to protect the soil. And we also have to think of carbon sequestering (locking it up in the land) as a crucial productive use – likewise active steps to recover our biodiversity.

We need substantial rewilding, the planning of native woodlands and encouraging our dead, barren land back into life. It provides a wonderful habitat for wildlife and locks up tonnes and tonnes of carbon every year it grows.

All of this would create a massive boom in rural economies all over Scotland. More than that, it would stimulate entire new fields of economic activity in all kinds of areas. Making land available would enable many new and innovative land-based industries to thrive. Right throughout the supply chain and into the manufacturing sector, countless opportunities open up.

It changes our country – for all of us. It gives us the fuel and materials to do our part (and much more actually) in ending man-made climate change and problems of pollution and extinction. It creates good jobs. In fact, one of the problems may be the sheer size of workforce we might need.

There is no shortcut to get to this. The wimpy, unjustifiable way that the Scottish Government behaves like a few bribes to very rich landowners is their responsibility discharged must be challenged vigorously. There is no market model to fix this and the landowners have had their chance.

There is no alternative to large-scale, collective action. We need a very major, coordinated land planning strategy for Scotland. Land taxes, compulsory purchase and regulation must be used to break up the estates and infrastructure must be put in place to make better use of them.

We need to coordinate all of it with a Green New Deal. We need to stop accepting that about three or perhaps four people in the Scottish Government alone stand doggedly between Scotland and progress – ask your leaders why they mouth platitudes in public but promise in private that nothing will be done, no-one will be challenged, nothing will change. They need to answer for their inaction.

Above all, we need to stop tugging our bloody forelocks, end Scotland’s deferential subservience to the landowners, dismiss their ‘it’s our culture to kill we birds’ as trivial in comparison to the real challenges we face.

Poor, naked Scotland, stripped bare and left empty of people, animals and ambition. Enough, enough – there’s nothing glorious about the 12th of August. It just reminds us how badly we’ve failed. Now it must remind us of why and how we become a better nation.