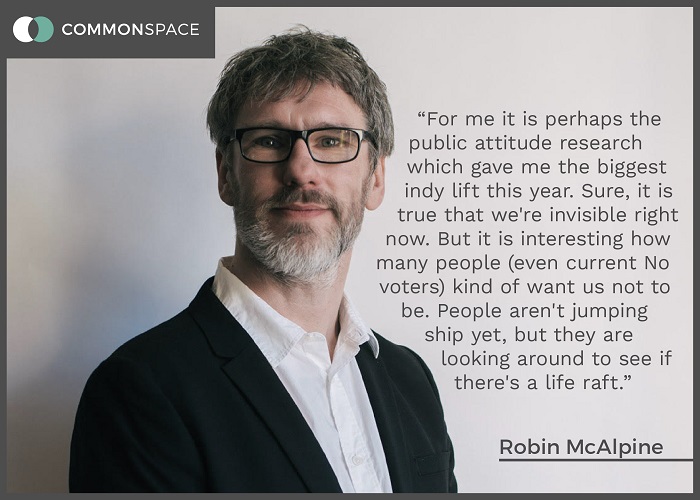 LET ME just start by saying that 2017 has been a pretty miserable year for progressively-minded, independence supporting people. (This column will get cheerier quite quickly, promise…)

In Scotland, despite all the enthusiasm with which the Scottish Government likes to badge itself as ‘Scotland’s progressive government’, after three years of Nicola Sturgeon’s leadership it’s pretty hard to work out what the progress is exactly. (Sure, there was time-consuming Brexit, but I’ve grown tired of this omni-excuse.)

This is particularly concerning because, generally, most leaders have done their best things in their first three years, a period of time which is close to the half-way lifespan of most national leaders.

Despite all the enthusiasm with which the Scottish Government likes to badge itself as ‘Scotland’s progressive government’, after three years of Nicola Sturgeon’s leadership it’s pretty hard to work out what the progress is exactly.

As worrying, it’s not at all clear that a lot of progressives in Scotland would call this ‘their’ government. When it’s not been excessively cautious (most things) it’s been reckless (education) or alarmingly compliant to big business lobbying (housing, economy, procurement – it’s a worryingly long list).

For the independence supporter, there really isn’t much that needs said. We can paint on a brave face but few national political movements have faced the humiliations we’ve faced this year.

The hubris with which we were encouraged to wave around our certainty that a winning referendum was round the corner (miraculously, without us having to do any work) always spelled trouble.

When that complacency hit the SNP at the ballot box, the entire movement was dragged down with it. And, sadly but predictably, in its humiliation the movement turned inwards on itself, with a small band of our less constructive hardcore desperate to point the finger of blame at anyone other than those responsible.

And then I got to read through a lot of transcripts of ordinary people in safe, academically-controlled environments talking about us. Few things are more sobering than, briefly, to see ourselves as others see us.

For the independence supporter, there really isn’t much that needs said. We can paint on a brave face but few national political movements have faced the humiliations we’ve faced this year.

And, basically, they don’t. They don’t see us. They remember us (from the last indyref), they clearly know the SNP and what it’s saying (this isn’t universally a good thing…), but they no longer understand what we’re for exactly.

But perhaps above all, an awful lot of them think that we publicly admitted defeat and have all given up and gone home.

So it’s all misery? I’d be lying if I didn’t admit that between that and the signs of general breakdown of Western liberal democracy (screw the EU, it’s the insects I want to save…), there’s been plenty.

But I’m damned if I’m going out of this shitty year in misery. And there are positives. Let me start with one which is getting me actually a bit excited – the prospect of a Scottish National Investment Bank.

This should have been started much earlier and as a result of enthusiasm rather than panic, but I’ve now had a chance to meet with and talk to the key players developing this proposal and it’s left me feeling positive.

The hubris with which we were encouraged to wave around our certainty that a winning referendum was round the corner (miraculously, without us having to do any work) always spelled trouble.

The people involved seem genuinely to want to do something real and meaningful and lasting and substantial. Common Weal made a submission to the consultation on how the bank should work and I’m very encouraged that those putting the plan together have received it so warmly – and that it is close to their own thinking.

I was afraid it might turn into another one of those good ideas that goes into Scottish Enterprise and dies under four tonnes of consultant speak. But for the first time in ages, there’s something coming out of a government that I’m actually getting excited about.

It’s not the only thing. I still have some concerns about implementation, but I remain very positive about the potential of the childcare expansion. With my family in the pilot and despite the fact that there are twice as many children in the same space, our wee chap is getting on great with the expanded hours.

And so are Cristina and me. The fact that Common Weal made strong representations that it was crucial to put more money into this (we proposed scrapping the Air Passenger Duty cut and redirecting it to childcare) may not be the reason it happened. But it happened. It could make all the difference.

There may not be much positive I can say about the government position on local democracy and housing, but in wider society, there is. I’m enthused by how much pull there is on these subjects.

But I’m damned if I’m going out of this shitty year in misery. And there are positives. Let me start with one which is getting me actually a bit excited – the prospect of a Scottish National Investment Bank.

We’ve been working with the Electoral Reform Society and others on the ‘Our Democracy’ campaign and there really is a lot of interest in a real reform of local democracy in Scotland. I am hopeful that government will catch up with this sentiment before it is too late.

And the pull that Common Weal has received since we started our housing project has been enormous. There are an awful lot of people who really feel our housing system is broken and I can feel an increasing momentum towards doing something about it.

I fear the Scottish Government is too deeply connected to the big housebuilding lobby to respond as it should, but a combination of some vision from local authorities, the finance of a national investment bank and some interesting thinking from some people around the Scottish Futures Trust could get quite a bit done if things fall in place.

For the independence supporter, there is also hope. We may be getting no leadership, but we’re making up for it ourselves. Local initiatives like the coalition of the local hubs which is being set up is really encouraging.

Moves like that in Aberdeen to produce clever, non-party approaches – with ambition – are emerging (look out for Aim or the Aberdeen Independence Movement’s big conference next year). There are a number of places where people are pulling together by themselves.

For the independence supporter, there is also hope. We may be getting no leadership, but we’re making up for it ourselves.

And the Scottish Independence Convention has at least tried to keep things alive, inject some momentum and do some pieces of important work like the public attitudes research. More will happen in 2018.

But for me it is perhaps the public attitude research which gave me the biggest indy lift this year. Sure, it is true that we’re invisible right now. But it is interesting how many people (even current No voters) kind of want us not to be.

I was ready for a pretty gloomy picture. That people were saying (in quite a lot of cases) ‘Britain is kind of scaring me and I would at least like there to be a persuasive alternative option’ is a good start. People aren’t jumping ship yet, but they are looking around to see if there’s a life raft.

And the rumours I’ve been hearing for ages about the implosions in the unionist campaign appear to have come out into the open today. If it was a miserable year for indy supporters, it was something of a pyrrhic victory for unionists.

They met the most listless election campaign from the SNP they could have met (I doubt they could believe their luck) and were given an absolute gift when the whole debate became about the single word ‘referendum’.

And the rumours I’ve been hearing for ages about the implosions in the unionist campaign appear to have come out into the open today.

Those two massive missteps gave them momentum and knocked us back on our arses. But it did little more than cover up the major problems they face – and it didn’t cover them up for long.

I’ve been trying to work out why this year feels like it has really put me through the wringer. It wasn’t as exhausting or emotionally draining as 2014. It wasn’t as nerve-wracking as 2015 (when we had to build Common Weal from scratch, having no idea if it would work or not). It didn’t seem to have the general hysteria of 2016.

I think the answer is that it was frustrating – and that this time, the things that went against us were of our own doing. There’s no point in complaining about the ‘unionist media’ if it was you that went on the telly and promised a referendum you couldn’t deliver.

But even more than that, it was an increasing and alarming sense of the sands running out. Right now I’m not really looking forward to the 2021 Holyrood elections. It feels like we’re much more reliant on underperformance by unionist parties than on the strong leadership of either the SNP or the Greens.

Lose a pro-indy majority and its over. So we may only have three more years to nail this, and it won’t happen on the basis of the ‘how do we get through the day’ bluff that seems to dominate.

I think that there is a good chance a proper, effective, non-party campaigning organisation for Scottish independence might be set up. We really, really need it.

But it really still is there for the taking. My priorities for 2018 are pretty clear to me. I’m finishing a book which summarises all the material in our White Paper Project (itself a cry of frustration about what wasn’t being done). That should be out early in the New Year and hopefully be a useful reference book.

Common Weal is really committed to pushing hard at least three fronts; housing, local democracy (we’re about to kick off a feasibility study into restoring burgh councils to Scotland) and the investment bank. I think progress on all three is possible.

I think that there is a good chance a proper, effective, non-party campaigning organisation for Scottish independence might be set up. We really, really need it.

And there are quite a few people asking ‘what is to be done about a proper prospectus for a new independence campaign?’ – a proper plan. This is what the public opinion research says wavering voters need most. Something could happen on this in 2018, which would be hugely positive.

Yes, I’ve been disappointed this year. At times ‘disappointed’ didn’t touch the sides of what I was feeling. There were moments of despair.

But once you see the world through the lens of despair, that’s the beginning of giving up. And this is perhaps above all a reason to smile; despite what they’ve been through, few people are ready to give up, at least not yet. For that reason alone, I retain hope.