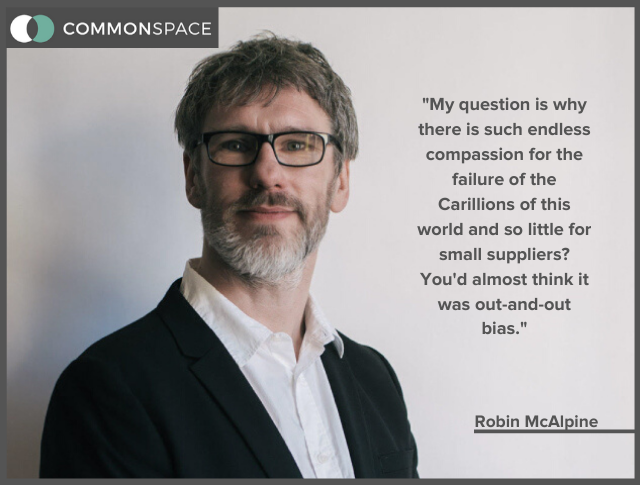 I WANT to rig the economy. I want, explicitly, to use public policy and practice to favour some parts of the economy over others. In this I am no different than anyone else commenting on the the economy.

In fact, on this if nothing else I agree entirely with the ‘administer the last rights and stop prolonging the cruelty’ Growth Commission. There are only two real differences.

First, I’m honest about it. There’s no such thing as an even playing field if the game is a permanent contest between an army of Goliaths and a handful of plucky Davids. Yes, the occasional David wins (microbreweries), but then the Goliaths just buy them or clone them so that eventually the Goliaths always win. This bias is built into the economy.

And second, I want to rig the economy for a completely different group of enterprises. Where the Growth Commission is very much about protecting the interests of Scotland’s bloated financial industries at the expense of everyone else (especially the public sector), I’d like to see a different kind of favouritism.

The enterprises in whose favour I want to rig the Scottish economy are productive, crop-growing, manufacturing or processing industries which develop strong Scottish-based supply chains, produce high-quality products which have positive environmental and social impacts, which create good jobs and treat staff with respect, are nimble and innovative and in it for the long term.

Many of you will have been told that this vision is a fairytale, an impossible dream for a wee country like Scotland. We’re a retail nation which buys shit from China and should be grateful for low-pay, insecure jobs in an economy overseen by massively powerful banks.

Well I’ve just spent the day in one of these fairytales, and I can tell you that if this is a figment of my imagination it was remarkably lifelike.

I have been up in Inverness launching the Common Home Plan to a packed and enthusiastic audience. The day before I stayed with Neil and Maggie Sutherland.

Neil runs Makar, a housebuilding business. Maggie runs an organic market garden. They’re the future – or should be.

Makar builds its houses in a custom-built factory in the Invernesshire countryside. It builds entire houses in that factory, pre-fitted with windows, roofing, cladding – everything. They’re delivered to site as panels and the time from foundations to completely water and airtight is two days.

The houses are almost entirely wood construction and are very heavily insulated – they achieve passive house standards without plastic, are almost chemical-free and look beautiful.

More than that, they are made almost entirely from Scottish wood. Not only does this massively reduce the ’embedded carbon’ (how much greenhouse gas was released during the entire construction process) it stimulates more industries in Scotland producing the timber.

The workforce is well paid, treated with respect and is deeply involved in the management process. There are regular meetings where the people who are actually building the houses are allowed to lead the analysis of the construction process to identify new innovation and process improvement.

You should want to live in one of these houses – they breath, they’re warm and cosy, they’re natural and don’t pollute the atmosphere inside the house. And they’re built to last 200 years at least – to be adaptable, be repairable, be ready to deal with the future.

But more than that, you should want all houses in Scotland to be built this way. The more that are, the more employment and prosperity is created here, the lower our environmental impact will be, the better our health and the more beautiful will be our housing stock.

And the ambition should go way beyond this – Makar’s factory is very much a large, industrial facility. But to prove a point, they built it solely out of wood. The simplicity of the roof support which enables this is, in its way, an engineering marvel. Scotland ought to build everything like this – it’s even cheaper.

What is so infuriating is that this roof isn’t an ‘engineering marvel’ in many other European countries – it’s normal. Businesses like Makar aren’t worth writing about in Austria because every medium-sized town has at least one and they build everything like this.

My vision of a reinvigorated Scottish economy created on advanced timber materials, light manufacturing sprinkled all over the country displacing poor-quality short-termism isn’t an impossibility, it’s just a decision we’re not making.

(The same is true of Maggie’s organic food production – objectively, this is how we should grow food. This is how you should want your food grown.)

So what is the difference between here and there? The loose answer to this is ‘all public policy’ – procurement, planning, taxation, business support, regulation and legislation all favour corporations.

Public bodies are forced to procure from multinationals who do all the wrong things. Economic development agencies claim intervening in the economy is ‘picking winners’. It’s not that they don’t think someone should pick winners – it’s just that they think the banks are better placed to make decisions about Scotland’s wellbeing.

And to be fair, banks are indeed kind of welfare organisations. Unfortunately, it’s welfare for the rich and powerful that they pursue. Inequality isn’t a symptom, it’s a goal. Environmental collapse isn’t a failure, it’s a necessary coincidence.

If you want a Makar near you, the economy has to be rigged in the other direction. Building regulations should make every house a 200-year house built to passive standards out of organic materials.

Economic development agencies must be active, looking for the gaps in supply chains and stimulating the closure of those gaps. Makar can’t buy wood-based insulation materials in Scotland, a country with Europe’s best opportunities for the expansion of forestry. Since we’ll need a lot of insulation in the future, offer start-up grants and order guarantees to enable it.

Because that’s the key – sustained order books for growing domestic businesses. Public bodies should promise to commission a guaranteed number of houses a year for say ten years from these kinds of businesses. If you think that sounds ‘against the rules’, it is precisely the model used by the Scottish Futures Trust – to guarantee no-bid contracts for up to 25 years (but only for big finance and multinationals).

What happens if some of these small businesses underperform? Well, here’s a secret – they will. That’s how industries improve – by making mistakes and learning.

So here’s my question – since every new build in Scotland already seems beset by construction disasters (you want me to list them?), my question is why there is such endless compassion for the failure of the Carillions of this world and so little for small suppliers? You’d almost think it was out-and-out bias.

And where I’ve written ‘housing’, feel free to insert an other industry sector you want. We can catch up with the developed world if we want to. Hell, we can overtake it if we want to. We just need to want to.

Scotland is in desperate need of an economic vision. The Growth Commission is finished – the person who commissioned it can’t explain it, the person who wrote it can’t defend it and people named as its members and advisors are racing to disown it.

The Scotland I am describing here would be massively more popular. I can show you what it would look like. It’s a real thing, struggling to be born into the low-productivity wasteland that the finance sector has created.

All economies are rigged. It’s time for everyone to decide whose side they’re on. Me, I’m clear.