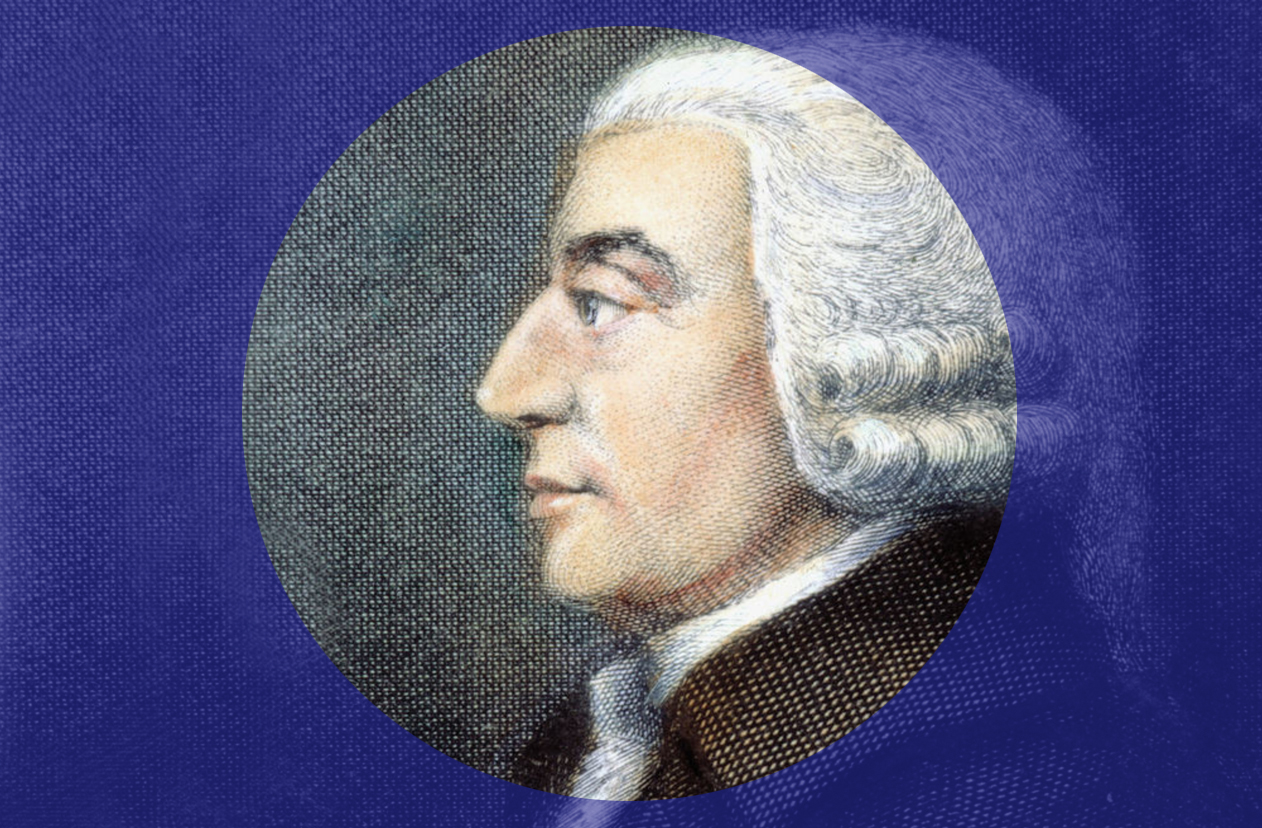 “Far from our economic model being the realisation of Adam Smith’s dream, it is the embodiment of his worst fears. It’s not a ‘free market’ – it’s a cartel.”

Common Weal Versus the Virus: The virus is exposing the reality of the weaknesses in our economy, society and democracy. Over the last six years Common Weal has been showing that the weaknesses can all be fixed. Over the next few weeks Common Weal Director Robin McAlpine will write a series of columns showing how Common Weal policy is the best way to survive this virus and then rebuild when its over. Today – Resilience Economics.

BORN IN 1972, by my adulthood both the utopian optimism of late-1960s anti-capitalism and the angry anti-Thatcherism of the 1980s were history. The Left was a losing brand. I tended not to describe myself as a Marxist or socialist (though basically I was).

It was the first upsurge in Left thinking in my adult life (the antiglobalisation and World Social Forum movements of the late 1990s) which really shaped my thinking. I read voraciously – what next, what next? I found much of interest, but no off-the-peg solution.

In any case, societies and economies don’t generally take two steps forward in one go (I wrote a whole book on this subject once). It left me with my own personal philosophy on this, which is that if I can’t see beyond the horizon, I need to climb higher.

What I mean by this is that if you want to see beyond a current system, then change that system in the direction you think you need to go. It is from that place that you have the best chance of seeing further.

I think the best way to see beyond capitalism is to create the best form of capitalism and, once there, see what the next best version of that is.

So what’s the best form of capitalism? Thorstein Veblen pretty well nailed it at in the turn of the last century. He said that industry was making things we need, while business was trying to take other people’s money (though I suspect he’d find that a bit crude as a summary…)

That’s what I mean by the best kind of capitalism: let’s be industrious, let’s grow and make and build and care and serve. It creates the best jobs and the most productive economy. It’s an economy in which we can take pride.

Today Common Weal launched our economic framework for a post-Covid economics. It’s not all that hard a read so I won’t summarise it in this column – you can read the full thing here, a shorter summary here, or my piece in the National today. It’ll make perfect sense.

Resilience Economics is about how to create that kind of industrious, creative, productive economy and get away from all the speculation and scams and monopolies and cartels. It’s about us trying to paint a picture of the best kind of capitalism.

It does not mean less-bad-capitalism is a final destination. I might not generally describe myself as a Marxist, but that isn’t because of the work of Marx. He was spot on about capitalism – it is fundamentally flawed. (In fact, is it not remarkable how much of Marx’s analysis is still the most accurate description of our economy nearly 200 years on? He could never have predicted Amazon or Uber but managed to describe them pretty precisely…)

But there is a serious chance that if we don’t reform capitalism, what comes next might be worse – I mean, does news coverage from the US these days not send chills down your spine? Anyone on the Left hoping that capitalism might completely fail should ask themselves if they’re confident in their ability to shape what comes next. There are others who are, and they’re not nice.

Plus, there are some aspects of human nature which are taken to be ‘capitalist’ and some of them I admire greatly. When I was little more than a toddler, a man on our normal, suburban street was building himself a small yacht from scratch. He let me in once or twice – let me say the attention to detail was either amazing or insane, depending on your perspective.

I’ve always, always had the deepest admiration for that kind of slightly unhinged drive, the desire to do something others think is a little crazy. I think that one of the great flaws in humanity is that we create bureaucracies which knock that kind of determination and creativity out of people.

Real enterprise isn’t sitting around trying to come up with some scam as per Dragon’s Den (or most of Silicon Valley). It’s the determination to start a community cafe despite not having a clue how, or inventing a vacuum cleaner with a whirlwind inside it.

That should be the best bit of capitalism – people with an idea and a drive existing in a system that gives them a fair shot to try and make something of it. I really want that back – because it is so, so far from the current reality.

Nowadays, the goal is to work out how to take someone else’s money, usually by buying up something they need (property, land, electricity generation, market access, the NHS if you can get your hands on it) and holding it hostage until their bank account is empty.

(And on this point I do need to emphasise that capitalism can only be saved if it is kept a mile away from public services and much else in the Foundational Economy. Common Weal Board Member Angela Constance led on calls for the nationalisation of care yesterday and surely we all know she’s right. If capitalism is to be saved we must know where it’s limits lie.)

From the beginning, Common Weal has not only supported independent business but spent a lot of time talking to them (from the micro to substantial medium-sized producers). I always ask a lot of questions and in particular I always ask what would make the difference to their business.

This isn’t the place to list all of what I’ve heard, but if I was to summarise it, it would come down to a fighting chance – ‘give us a fighting chance’. What they mean is: ‘big business can crush us at will and they do it every day’.

If you look at Resilience Economics (and even more so the major action plan that we’ll be publishing soon), you’ll note just how much of the recovery is based on micro, small and medium-sized domestic business.

It is that sector which I want to see drive our future, not in the facile Scottish Enterprise sense (another hundred hair salons with no business model will look like small business start-ups so that’ll do), but in the German Mittelstand way.

Most of the ones I’ve talked to want to do the right thing by their employees, by their customers, by their communities and by the environment. They don’t have the sociopathic callousness of an Amazon or Facebook – saving a penny or two via non-recyclable packaging isn’t worth it in their business model.

But they cannot get market access. They see their first-rate produce being undercut by piss-poor equivalents from corporate giants, even though they are genuinely competitive. You can get custom made Scottish furniture of solid wood that is competitive in price with Ikea. You just can’t find it very easily…

We don’t have a market driven by innovation where the consumer picks the best product and so that business gets stronger. We have a market owned by giant businesses which makes sure that products that compete with theirs don’t get any visibility among consumers.

Far from our economic model being the realisation of Adam Smith’s dream, it is the embodiment of his worst fears. It’s not a ‘free market’ – it’s a cartel.

So how do we replace rapacious profiteering with genuine enterprise? That’s what Resilience Economics is about. It’s about driving an economy via quality, not just quantity. Its about true opportunity, not exploitation. It’s about that fighting chance which businesses are asking for.

We’ll launch the really meaty part of what we’ve been working on next week (in bits – there’s too much of it), but since we’re trying to offer ideas on how to fix Scotland now we’ve kept out ‘next system’ stuff. That doesn’t mean we’ve not thought about it.

But I wanted first to make clear what I hope we are doing. We can’t let an economy fall apart, because it’s not the corporations which really hurt, it’s people. We have no option but to save some kind of capitalism. For now at least.

So that’s what we’re trying to do at Common Weal, come up with a fix for now, and build it as a staging-post to something better still. It is us who are really championing enterprise, Scottish business and productivity. We have a vision for how that transforms Scotland.

You can already hear the old voices telling you that it is really them who believe in enterprise and the free market. But if you listen carefully, what they really want is government handouts so they can once again lift their guns, put them straight to your temple and prize the money out of your pockets again.

That’s not enterprise, that’s greed and privilege. It is the swaggering arrogance of ‘I had lots of money and so bought a risk-free property portfolio and now I demand that my tenants not be protected because I’m the true motor of Scotland’s economy’ (along with their many equivalents with their many lobbyists), and it turns my stomach.

Next Up: Platform Socialism