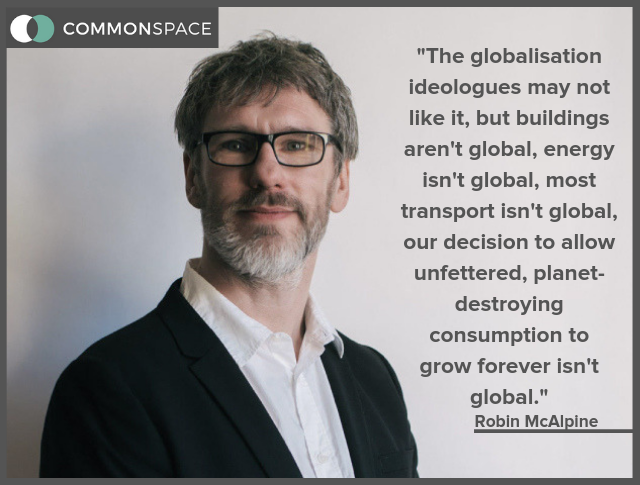 I KNOW this is counterintuitive, but I’m feeling hopeful. I know that many of you will be somewhere in the depths of despair but at least in Scotland I think it is important that we project hope. And I think there is good reason we should.

Partly my positive mood is driven by a two-day study visit run by Reforesting Scotland that I’m just back from, researching land issues for our Green New Deal project. It was inspiring.

But really, it was more reminder than revelation. It is a simple story – apparently unsurmountable problems can be overcome with hard work and dedication.

We saw the bare-naked hills of a Scotland which have been stripped of life by the destructive land management practices of hundreds of years. But we saw hills that barely 15 years ago looked the same but were now lush and green and alive. The transition from one to the other didn’t result from moaning and complaining but from planting.

One of the things I learned (I’m very much a forestry beginner) is that a forest that looks big and strong and healthy may actually be rapidly dying, and another that may well look in a state of decay is actually in great health.

The trick is not to look at the trees but the saplings, not what grew in the past but what is growing now. One is an echo of history and the other a promise of a future.

The metaphor fits our current political situation rather well. At least since the financial crisis of 2008 and probably well before that, the institutions of British politics may have looked large and domineering but they’ve been dying from below and there has been little sign they were being regenerated by a new, fresh-thinking generation.

What looked solid was actually what remained from a previous era; the events that lay ahead were gradually going to blow over these remnants.

Boris Johnston doesn’t represent new growth. His ability to sit down with an unelected monarch who is a distant relation and decide between them that they’re going to suspend democracy is surely the definition of the last old wood still standing.

But nothing stands forever, and while the ‘United Forces of Remain’ are engaged in an ongoing struggle to out-clueless each other and it may look like the coup is almost complete, there are storms everywhere and they will batter this regime.

The problem for much of the UK is that, when old wood is blown over, what grows in the spaces it leaves is never certain. I took a trip to London earlier in the year. I wanted to catch up with some of my friends down there who are fighting for reform.

My goal was very much to find out what fresh saplings were taking root that might grow to become a healthy future. I must admit I was a little alarmed; there is no shortage of great people in the capital, doing what they can, but it’s hard to see what is taking root exactly.

That does not mean that England is doomed. There are inspiring things happening all over the place, but they’re probably not growing fast enough. It’s not that there is no hope, it just feels a little further away.

But I don’t feel like that in Scotland. Out little plantation, our Scottish Parliament, may itself be starting to look like it could do with some genuine signs of regrowth and renewal, but across the country the signs of regeneration are everywhere.

The independence referendum brought many of them to the surface. Despite the gaslighting of the unionist media, despite the apparent determination of the SNP leadership to distance itself from the sense of excitement and optimism that was generated, even so the component parts of that excitement remain in place.

I’ve been looking again at public attitude research work. I remain surprised by the fact that, in interviews with 50 soft No and undecided voters over 12 hours, every single one of them without fail expressed open enthusiasm for the Yes campaign.

They may not have had sufficient confidence in us to definitely deliver on the promise at the time, but it spoke to them of a political hope for the future that they wanted to believe in. It is a very real reason for hope.

Everywhere I go in Scotland are people doing things for real, changing things, building things, mapping a way forward. If we can bring together that hopeful story with the desire for hope that is so clear among our population, we should have every reason to feel optimistic.

But probably nothing has made me personally feel more optimistic than our Green New Deal work. We started it out of frustration at the deadwood politics which finds an endless set of reasons not to do anything about the existential threats we face.

Deadwood politics ‘accepts the science’. It ‘knows’ that progress is only possible through long, long compromises with the rest of the world’s deadwood. It sets targets. It announces climate emergencies.

What it doesn’t do is insulate houses, replace heating systems, build publicly-controlled renewable energy generation, adapt our agriculture to regenerate the land.

And yet, despite all the endless talk and talk and talk, that’s really what a Green New Deal means. It is 90 per cent engineering and ten per cent courage.

In fact, by a long way my biggest revelation has been that the whole argument that the climate emergency is a global problem that can only be solved globally is really difficult to stack up.

The globalisation ideologues may not like it, but buildings aren’t global, energy isn’t global, most transport isn’t global, our decision to allow unfettered, planet-destroying consumption to grow forever isn’t global.

It’s the realisation that Scotland can become independent quickly, that immediately we can just get on with what has to be done, that there is nothing whatsoever that prevents us from transforming everything in 20 years.

It’s knowing that the process of this transformation is more than capable of taking head-on and solving the poverty and insecurity which besets our population. It really is that big a deal.

But the old wood has one final trick to play; despair. It wants you to put your head down and weep for the sheer impotent uselessness you’re supposed to feel about yourself. So the most radical thing we can do just now is plan for the opposite and behave like its true.

This is what underpins Common Weal’s new fundraising campaign. It’s not fucked. You’re not powerless. There are tasks that must be completed, but we are more than capable of completing them.

There is still a long road from here to there, but we’re on the road. I have more than my share of the Scottish capacity for gloom; there’s a comfort in wallowing in misery. But the exhilaration of believing that I might be able to see the corner turned in years not decades beats the comfort of gloom hands down.

I’m not scared. I’m ready. And it feels really good.