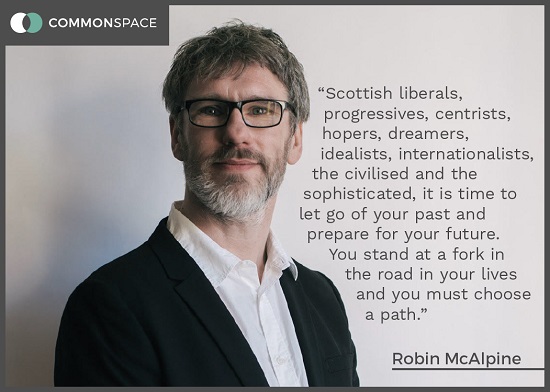 CommonSpace columnist and Common Weal director Robin McAlpine says Scotland now finds itself at an urgent crossroads, and previous No voters have big decisions ahead of them

SCOTTISH liberals, progressives, centrists, hopers, dreamers, idealists, internationalists, the civilised and the sophisticated, it is time to let go of your past and prepare for your future. You stand at a fork in the road in your lives and you must choose a path.

If you take the first path, you must invite them in and try to accommodate them. If you choose the second, you must run and leave them behind.

A reactionary rightwing politics has captured parts of the UK and large chunks of the US – along with swathes of France, Holland and Austria and substantial parts of Eastern Europe. And, despite some genuine unease, the financial and corporate elite see no option but to make accommodation with them.

If you’ve not noticed how all these accommodations are playing out, just look at who the UK now phones when it phones people. It calls Trump, Erdogan, Netanyahu and the Saudis (soon to be followed by Sauron, Voldemort and Freddy Kruger). If you don’t understand the depth of this accommodation, read this piece about how ‘dark money’ is doing what it does.

This table will not have a seat reserved for ‘Scottish progressives’, and you wouldn’t want the seat even if it did. The UK is about to reorientate itself in a Trump-America direction and there is nothing you can do to stop it.

So why are there no other options? Mostly the kinds of voices which claim to want the kinds of things the independence movement wants but without ‘division or nationalism’ jump to ‘federalism’ as a kind of magic solution, like devolution was a magic solution the last time this happened in the 1980s.

I simply can’t believe what Kezia Dugdale gets away with when she talks about a federal solution. The media seems to have no interest in constitutional theory or real world experience and simply takes her at her catchphrase word.

The UK is not and will never be a federation if that federation is to be comprised of the existing UK nation states. Because the other feature of federations is balance of power. They function because each of the constituent semi-autonomous parts is similar in size and power to all the others, has an equal voice. No-one gets 84 per cent of the power in a federation.

So unless England itself agrees to become a federation with, say, 10 state parliaments (which incidentally is what I believe to be England’s best chance of modernising itself and overcoming its crazy London bias), Scotland will never be much more than an uppity local authority.

Next time you hear someone say they favour a ‘federal solution’, do ask them what they mean and in what way it would be different from devolution. I suppose we could be offered a permanent veto over UK policy or the right to cede from the federation unilaterally. But that’s not going to happen.

So what about devo-max? Sure there are more powers that could be given to the Scottish Parliament; perhaps broadcasting, work regulation, the whole social security system and so on.

But there are two reasons why this isn’t a solution. The first is that you can be a bit different inside a unitary state like the UK, but you can’t be all that different. If the UK is going on a US-style deregulatory spree, imagining Scotland can be something different is to fail to understand how things really work.

Macroeconomic and monetary frameworks, international trade relationships, foreign policy – these set very substantial constraints on the other policies which take place within them. All the devolution in the world would still have seen Scotland leaving the EU and making a deal with Trump.

And that’s the second reason – many of the things you want saved from can’t be averted through devolution. You might well have a slightly more generous benefits system but inside a macro-economic framework designed for low public spending you’ll struggle to pay for it. You could build a better agriculture policy but couldn’t stop chlorine-washed US chicken entering the food chain if London permits it.

I simply can’t believe what Kezia Dugdale gets away with when she talks about a federal solution. The media seems to have no interest in constitutional theory or real world experience and simply takes her at her catchphrase word.

And you could regulate the press slightly, but as you pass the news stands you’ll still be reading Daily Mail front pages about how we’re moving ever closer to a US-UK war with China.

So what if we all just put our differences aside, learn to get along and form a coalition to resist the barbarians at the gate? You know, like we did in the 1980s against Thatcher (a hope best articled by Joyce McMillan in a recent Scotsman article).

In this version, the various ‘elites’ of Scotland would get their activist outfits on and collectively come together to design a way forward that no-one can disagree with.

Thus churches, trade unions, the voluntary sector, business organisations and the like (the fabled ‘civic Scotland’ of our recent past) could design a plan that gains universal approval and saves us all.

Except the churches don’t have much policy capacity, the trade unions (and especially the STUC) are a shadow of their 1980s selves, the big players in the voluntary sector have become pseudo-corporate in nature and don’t touch issues outside their remit, the business organisations aren’t really on our side and so on.

The ‘save us from the ground up’ path? Encouragingly, there is a grassroots movement that seeks to do just that. It’s called the independence movement.

The reaction to Thatcherism, which led to devolution, was in truth a move conceived and driven by individual activists who fought to bring their organisations on board. Those kinds of activists are either no longer in these organisations or would be unable to bring them on board anyway.

Radical institutional Scotland was a moment, not a feature of our nation. As important as they are, they all ran away and hid during the last referendum and I see little evidence that anything much has changed.

In any case, while I’m the first to admit that the Scottish Parliament’s agenda is tame and frankly disappointing, we’d end back up in a devo-max compromise situation within minutes, which I’ve just argued isn’t a solution at all.

The ‘save us from the ground up’ path? Encouragingly, there is a grassroots movement that seeks to do just that. It’s called the independence movement. If you don’t like it, you can wish there was another one. But there isn’t and there won’t be – the grassroots has already chosen sides.

Which takes us to Momentum, Jeremy Corbyn and Common Weal’s good friends at Compass. There are two models for ‘save us all through Westminster’. One is the Momentum/Corbyn route, but even a left optimist like me now has to accept that this isn’t going to happen. It gives me zero pleasure to reach the conclusion that Corbyn isn’t capable of winning, but I’m afraid that’s the conclusion I’ve reached.

If you don’t like it, you can wish there was another one. But there isn’t and there won’t be – the grassroots has already chosen sides.

The other model is a broad coalition of Labour and Lib Dems to create a one-issue parliament which would reform the voting system and a couple of other things and then hold another election under proportional representation (there’s lots about this from Compass).

It equally makes me sad to say that this probably is England’s best chance just now – and it is really a bit of an act of desperation. It springs from the assumption that a direct challenge to the Tories isn’t going to work. And frankly right now it’s looking like a long shot.

Plus, what afterwards? PR will balance Westminster better, but it doesn’t change the political undercurrents in England.

So, Scottish liberals, progressives, internationalists and anyone else who doesn’t like what Scotland is becoming under UK rule but can’t bring themselves to just back independence, I feel for you.

You’re stuck at a fork in a road you don’t even want to be on. You wish you were somewhere else (and you’re not alone). You dream of a third path hidden in the undergrowth. But it isn’t there and try as you might you won’t find it.

It’s accommodation or it’s separation. I’m kind of sorry you have to choose. But you do.