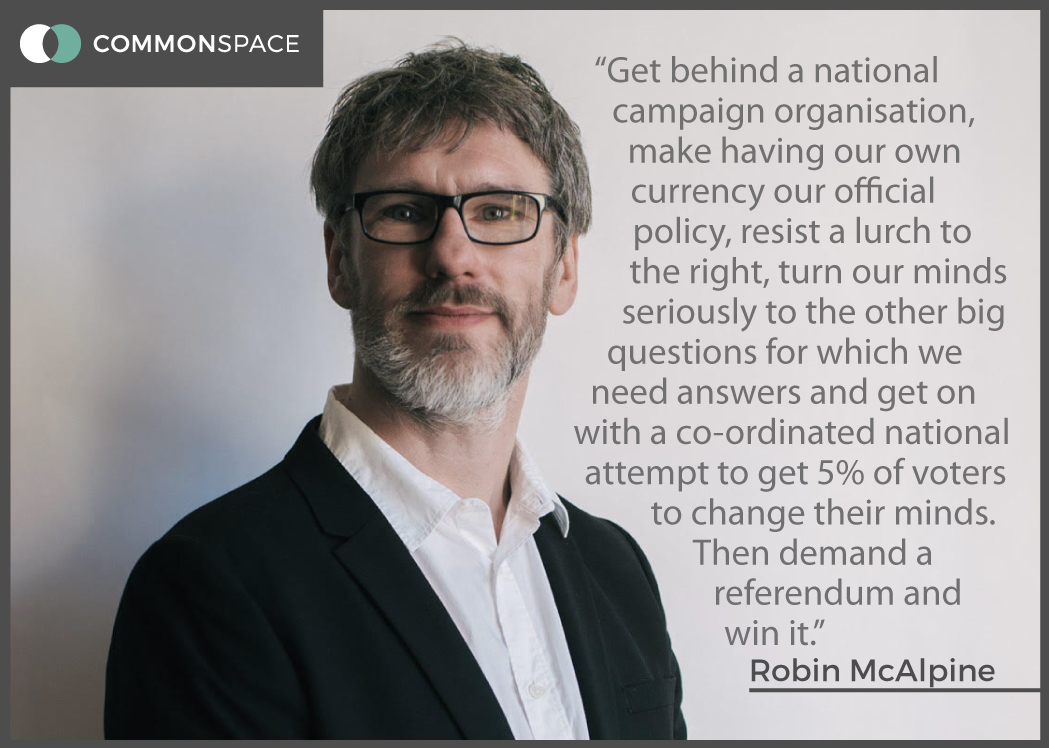 Common Weal director Robin McAlpine says there is paralysis in terms of the leadership of the independence movement, but the Scottish Independence Convention is ready to change that

ON 24 MAY I wrote a column in light of the hints coming from the SNP that there might be a campaign in favour of Scottish independence over the summer. You wouldn’t have mistaken me for someone who sounded convinced.

My argument was that I thought the hints were another pretty cynical attempt to pacify the party membership before a party conference and that I fully expected the hints to come to nothing as soon as the membership were out the door.

Well, June, July and half of August are gone and if the promised ‘summer initiative’ happened, I missed it.

In the absence of any leadership the movement is back (again) arguing over whether ‘jump’ or ‘hide’ is the best strategic approach. The ‘jump’ people just will not engage with the fact that, from where we are now, the UK Government will not give us a Section 30 order so there will be no immediate referendum. The ‘hide’ people seem determined to mistake inaction for wisdom.

READ MORE – Revealed: The currency debate that won’t be heard at SNP conference

I know you’ll be as sick of reading it from me as I am of writing it but we need to get on the right side of democracy and demand a referendum from a position of strength with support consistently above 50 per cent. Westminster still might not give us it but at least we’d be in a position to put up a real fight.

And to get there we need a campaign; we need to persuade people. The world is absolutely full of political campaigns which are moving the polls outside of elections or referendums; the Scottish independence movement isn’t one of them,

So instead we’ve got a vacuum at the top and have been relying on the sheer determination of the grassroots to prevent us from disappearing completely.

Then, just in case you hadn’t yet got the message, the SNP hierarchy seems systematically to have expunged any mention of independence or currency from the annual conference. For those of you who thought you were getting a referendum announcement, the fact that key question won’t be faced until the middle of 2019 should clarify things.

It feels like my hopes – and many of yours – are in a tin can being kicked further and further down the road. The debate over whether this is cynical careerism or canny strategy seems to be omitting the possibility that this is just paralysis.

The Growth Commission hand grenade was lobbed – but then just left there. We were promised a big, wide debate within the entire movement; we’ve instead got three internal SNP events with no voting which look mainly like a PR opportunity for Andrew Wilson to sell his vision.

There are times when it feels like every party statement has only one of two purposes; to promise that action will take place sometime soon or to undo any previous promise of action.

A big, national-level issue such as Scottish independence cannot be tackled without a big, national-level story. And, by default, the undead Growth Commission seems to have made ours a tale of struggle and strife and a decade of difficultly and pain.

Even the much-needed scrutiny of the glaring holes in the report will now be shelved. Under these proposals, Scotland would never be able to meet the entry criteria of the European Union (the rules say you must have a currency and a central bank). But hey, quickly, look over there!

I’ve been invited to talk to quite a number of SNP branch meetings since the Growth Commission launch. None are happy; everyone’s waiting for someone to do something about it.

And to be honest, currency should have been the easiest question to answer (we need one…) – the difficult questions have still to be addressed, like future border arrangements. When is that conversation starting? (And will our apparent enthusiasm for the prejudices of imaginary Tory No voters lead us to commission someone to propose ‘building a wall’?)

So the paralysis spreads – no idea about timing, no idea about strategy, no public opinion research, no plan for campaigning, no answers about policy. No serious preparatory work at all and no plan. Just nothingness.

We’re turning into ditherers, standing twenty metres away from our opponents shouting ‘haud me back’.

I take my share of the blame for this. If the SNP wasn’t going to lead, the wider movement should have taken the lead ourselves. The only organisation capable of doing that was the Scottish Independence Convention (of which I’m an active member).

It has membership from every political party and national organisation which is pro-independence as well as membership by regional forums of all the local groups. No-one is excluded; this is as ‘together’ as it gets.

READ MORE – The grassroots view: Indy supporters tell us how Yes can win next time around

Which can sometimes make it slow going. We’ve done some useful things but it clearly hasn’t been enough.

And that in itself is really frustrating. As well as all the obvious backdrop of UK politics unravelling, SIC’s new in-depth internal polling shows real shifts in how people are feeling and signs of substantial movement of a large undecided group towards rethinking its position.

But while it has taken too long, the SIC is now close to starting an initiative that I think can turn this indecision and inaction around. Finally it looks like we’re genuinely on the cusp of launching an all-movement pro-independence campaign organisation. If it gets resources and has united support it could shift the polls by five per cent with perhaps six months of campaigning.

From there our options open up. The only reason for this whole ‘when the time is right’ thing is because we aren’t taking control of events.

READ MORE – Sturgeon: ‘Why’ not ‘when’ most important independence task ‘right now’

But – and I can’t stress this enough – if, between us, we start to complain and snipe and undermine a genuinely all-movement initiative, I don’t see what we do next. We’ll have to resign ourselves to the jump/hide dichotomy. Well, apart from those who drift away.

It’s now two years since I felt we’d hit a state of full paralysis; this time last year I was arguing with people that only when we all accepted that this really is paralysis and not patience would we be able to make progress.

At least now I think most people realise that this is indeed paralysis and not wisdom. So it’s what we do next that really counts.

Get behind a national campaign organisation, make having our own currency our official policy, resist a lurch to the right, turn our minds seriously to the other big questions to which we need answers and get on with a coordinated national attempt to get five per cent of voters to change their minds. Then demand a referendum and win it.

This is by far the best path open to us. Let us, together, take that path enthusiastically – or live to regret it.

ENJOY READING COMMONSPACE? Click here to get our newsletter so you never miss a story