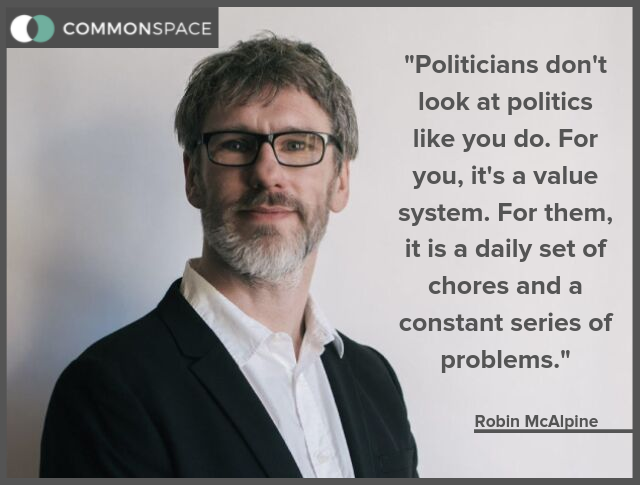 AT THE moment I spend a lot of my time answering emails, talking to people at events, being quizzed by activists who spot me in the supermarket…the question is asked in different ways and with a spectrum of profanity, but its basically the same question: “What’s going on?”

In the minds of most people, there has been some slight disquiet over the last three years that quite a lot less was happening in terms of visible activity on independence campaigning than they felt ought to be happening. But we’re a surprisingly patient movement – people might not have agreed with the ‘perfect moment’ strategy, but they went along with it.

What has happened now is that, in the minds of many people, we have arrived at something like the perfect moment – and still it feels like we’re waiting. That’s behind the fairly rapid outbreaks of dissent we’re seeing everywhere.

So what is really going on here? Why does it feel like ‘nothing is happening?’. I think it’s now important that we start to face up to this question more honestly, because the answer is really fairly straightforward.

Nothing is happening. Nothing has ever been happening. That many people believed something ‘must’ be happening is a result of the way humans think and it has resulted in a chasm lying between what indy supporters assume and what they see.

READ MORE: Analysis: The prospects for indyref2 and Jeremy Corbyn as Prime Minister are closely inter-twined

It’s all down to cognitive bias, the hard-wired ways that humans use ‘thinking shortcuts’ to help them deal with the vast amounts of information the brain deals with. I’m a bit obsessed with cognitive biases because they are at the heart of effective political campaigning. If you’re not up to speed, there’s lots and lots to read but this is as good a primer as any.

At the heart of the problem is a cluster of biases of three main types: “We think we know what others are thinking”, “we find stories and patterns even in sparse data” and “we are drawn to details that confirm our own existing beliefs”.

So first, when we think about politics and public affairs, many of us have independence as a primary or dominant issue. Looking at any given situation, we will see that situation as it relates to the cause of independence. We then assume that others are looking at issues the same we way are, thinking the same thing.

It’s one of the biggest mistakes people make when they’re trying to influence politics. Because politicians don’t look at politics like you do. For you, it’s a value system. For them, it is a daily set of chores and a constant series of problems.

In a previous role, I took my team for an informal chat with a backbench MSP. Before we went I asked them to guess what would be the issue at the forefront of this politician’s mind. They guessed things like ‘scrutinising legislation’, ‘preparing for a committee inquiry’ and ‘working on party strategy’.

The correct answer turned out to be ‘septic tanks’. A bitter legal dispute had broken out in the constituency over a leaking septic tank and the MSP had been drawn into the fight.

It’s like believing that a dentist wakes up in the morning thinking of fluoride (rather than how to get the kids to school), or imagining that a greengrocer must be focussed on the science of climate change more than most.

Likewise, a First Minister wakes up wondering who is going to attack today, what crisis is going to blow up, who in the party looks like they might be making a move.

Nicola Sturgeon is facing a string of major problems in her domestic agenda, growing dissent in her party, a potential queue of new crises emerging from London that Scotland has little power to mitigate, could face a General Election any time and is mired in a nasty and extremely risky feud with her predecessor which will be immediately followed by a damaging parliamentary inquiry.

Until recently party loyalty was shielding her from too much pressure over independence – and in politics, if it doesn’t hurt, you don’t think about it. I’ve worked for very senior politicians; all of them sooner or later reach a point where their main objective is to ‘get through the day’.

Second, humans are great at finding patterns where there are none; this is how we have astrology. Thus we watch sporadic, individual announcements, comments and actions from politicians and we fill in the gaps to create a coherent understanding of what is going on.

But again, I’ve worked for senior politicians and honestly, an awful lot of it is just random stuff that comes up each day. Mostly it is not some coordinated masterplan, just a sequence of things that seemed to make sense at a half-hour morning team meeting.

Inside Common Weal I’ve been saying this for a long time; you’re assuming there’s a clear and consistent point to all of what is happening and I don’t think that’s right.

For example, I spend a lot of time answering questions on why a ‘life long independence supporter like Nicola seems more interested in the EU’. I’ve heard any number of theories about the strategic intent.

Seriously, what would you do? Have you never dodged the most important job because it was going to cause the most grief? Remain-ery is Surgeon’s happy place; the belief it’s a strategy is our post-hoc imposition.

Then again, that’s because “we are drawn to details that confirm our own existing beliefs”. It has been an axiomatic belief in the independence movement that Sturgeon is a master strategist and has at her disposal a first-rate team working tirelessly for independence.

There has been a host of real world ‘data’ to suggest this isn’t the case. I will never alter my view that no political strategist worth their salt would have blurted out a commitment to a referendum on Brexit morning before they had seen any public opinion assessment and knowing they couldn’t deliver a referendum anyway.

If you look at verifiable data from the last three years you could equally draw a narrative in which Sturgeon realises she’s made a terrible, terrible mistake, quickly paid the price electorally and has since been scrabbling to stop things unravelling further – by imposing greater and greater control on her party and actively undermining any dissent.

The evidence stacks up this version of events much better. If the ‘strategically-focussed’ narrative was correct, there would be some evidence. Campaigns aren’t made out of ether; they start with development, testing and infrastructure. Are you hearing lines being tested, questions being answered? The absence of these things means the absence of strategy.

Yet many people have taken the absence of evidence to be evidence itself – ‘I can’t see anything happening at all so it must all be secret and brilliant because it’s not possible that nothing is happening’.

It’s easy for me to be off-hand about all of this. This is my career. I’ve dedicated more than 25 years to learning this stuff, day in, day out. I work in a role that gives me access to much more information than most people (this trade revolves around having information you know but can’t share).

I can promise you that there is no preparation going on. You might imagine a civil service division working on this, but legally they can’t because it’s a reserved issue. You might believe there must be a high-level policy team in SNP HQ working on all of this. If so, they must arrive and leave the building by secret tunnels.

I’m every bit as susceptible to cognitive biases as anyone else. The reason I am obsessed is not just to ‘diagnose you’ but to understand me better. It’s because I fall into confirmation bias just as much as anyone else that I need coping mechanisms to help me do the things I do.

One of them is simple; don’t infer missing data. If a hypothesis has more gaps than data points, park it until you have more data points. Don’t assume if you can check, don’t guess if you can ask. If you check and you ask and the data isn’t there, dispense with the hypothesis.

I’ve been asking these questions directly of people at all kinds of levels nearly up to the very top. I have simply been unable to identify sufficient data to support the hypothesis that the SNP leadership knows what it is doing.