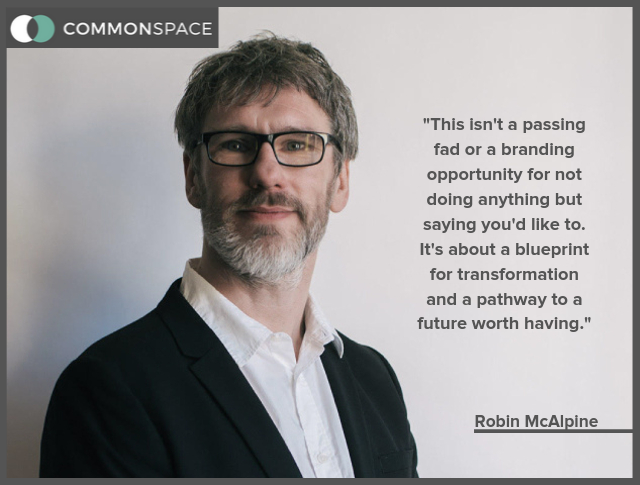 Common Weal director Robin McAlpine argues that the importance of a Green New Deal – for the independence movement, Scotland and the world itself – cannot be underestimated

THERE is a big factor I think the independence movement is missing, and while it gives some cause for concern, its also a big opportunity. It’s young people, and I’m a little worried that we’re not paying attention.

Because it is simply assumed that they’re all ‘in the bag’ as indy supporters, that we don’t even need to think about anyone under 40. But for many young people, independence is a second-order issue. It’s not what they talk about, what they worry about. And we’re not talking to them.

This has become increasingly apparent to me in recent months because Common Weal has been focussing on growing our support among younger people in Scotland and linking our Green New Deal work to the climate movement.

We’ve been at freshers weeks and on climate strikes and we have a new Common Weal ‘Young Team’ setting up as one of our autonomous groups. The messages we’re getting are pretty consistent.

What many of them worry about is, frankly, whether they’ll have a future. They worry about now (insecure employment, low pay, unaffordable housing), but what has captured their imagination is that this might be as good as it gets, that it could get much worse than this for them.

Indy supporters often assume ‘so they’ll vote Yes, obviously’. But it’s not as obvious to them as it is to us. They’re not really talking about independence, they’re talking about Extinction Rebellion. They very often don’t see independence as the solution – not because it isn’t, but because no-one has bothered to tell them it is.

So why are we making this mistake? The fundamental reason is that everyone (honestly, everyone) when they start thinking about political and campaigning strategy starts by thinking mostly about their friends.

We begin by thinking about the person we know who is not yet convinced and we start to think forward from there – how do I convince this person? We think if we can persuade that person, we can persuade anyone. So we devise our strategies for our buddies, our pals – even though we don’t realise it.

And it is important to be honest; people who are active in the independence movement are pretty overwhelmingly over 40 and disproportionately male (not by miles, but enough to be noticeable). I know this is true because I’ve spoken at countless meetings over the last six or seven years and I know who’s there.

I would also argue that, mostly, activists are not from the lowest end of the economic spectrum (partly because real poverty makes it very hard to participate).

Add this all together and it means that the ‘collective wisdom’ of the movement tends to imagine a political strategy that is very much geared for older, higher-income men – which happens to be a group which is also comparatively politically conservative.

And that’s how we’ve got the Growth Commission; without an awful lot of careful thought it is just assumed that older professionals are the make-or-break group.

I know this because, post-indyref, I was inclined myself to identify older voters as the challenge, partly because I’m a 40-something man myself and partly because an initial look at the voting data did kind of reinforce the idea (it was among the over-65s where we lost it).

Thankfully, I’ve had access to much better data since and I’ve definitely rethought this. There are a number of reasons (most of the data for the following is here).

For a start, the factor we can address before age is gender. Lower and middle income women just didn’t vote Yes as much as their male peers, but they’re more likely to get there than Edinburgh bankers – and there’s an awful lot more of them.

That was a second discovery – there just aren’t all that many of the higher-earning professionals in Scotland to win over. If every single person who earns higher rate tax in Scotland had voted Yes in 2014, it would barely have closed the gap by one sixth and we’d still have lost.

These are things I suspected – but I was still thinking ‘a bit older’. It was only after some more detailed polling work was completed that I realised that I was very possibly wrong. It was simply seeing data on what happened when different groups of people were exposed to different messages on independence that something became clear.

First, no-one when exposed to a positive indy message moved faster or more enthusiastically from No (or undecided) to Yes than young people. And second, there’s an awful lot of them.

Which takes us back to the idea that ‘they’ll just vote for us anyway so focus on the bankers again’. That’s where Common Weal’s recent experiences come in – that’s not necessarily true. For a lot of younger voters, action on climate crisis is key.

And in a set of circumstances where it’s a Green New Deal under say Corbyn (or a successor) at Westminster versus the Growth Commission up here, the idea that they are in the bag is a dangerous one to hold.

Us middle-aged and older voters grew up in an era of ‘signalling’. We were trained to make political choices on the basis of party allegiance and ‘pledge cards’ which were a kind of code for ‘party values’.

Younger voters are most certainly not party-alligned (the overwhelming response Common Weal has got from younger people is ‘oh, this is exactly what I’m interested in, not bloody politicians’) and they are not looking for signalling but are expecting a clear action plan.

What’s getting done and when? Don’t give me more patter and more targets – show me work.

And since the Growth Commission approach basically prohibits serious investment for a decade after independence, it’s going to be a tough sell.

Which is why a proper Green New Deal for Scotland is so damned important. This isn’t a passing fad or a branding opportunity for not doing anything but saying you’d like to. It’s about a blueprint for transformation and a pathway to a future worth having.

It creates many, many good jobs with security and it offers hope that it’s not all inevitably going to get worse. It is perfectly affordable and (with real effort) perfectly doable.

It will inject enormous vitality into many parts of the economy we should be supporting and will create opportunities for the many businesspeople and older professionals in Scotland too, so it’s not going to turn other voters away.

And it takes direct steps to improve people’s quality of life (warmer homes which cost less to heat, better-tasting food which is locally produced), so it’s going to be attractive to poorer voters and pensioners as well.

Plus it gives a sense of vision and hope and excitement which is currently sorely missing from the case for independence.

But above all, it welds the independence movement to the biggest social movement of our era and it brings in an entire generation of young people who are ready to be won over but who can’t be taken for granted.

So the next time you find yourself reluctantly going along with some centre-right pitch for independence based on how many high-income, Remain-voting professionals it will appeal to, think also about what that will sound like to a younger audience.

And then think about an inspiring Green New Deal-based pitch for Scottish independence and ask yourself it it is really a turn-off for older voters, because I just don’t think it is. (We don’t turn into barbarians as we age; we all know something serious has to be done.)

An ageing, creaking plan for an imagined ageing electorate risks us abandoning our key voters to a Corbyn-type vision. A fresh new plan not only seals the deal with them, I believe it will open the ears of an indy-curious undecided in ways we are most certainly not doing just now.

Oh, plus it saves civilisation as we know it.