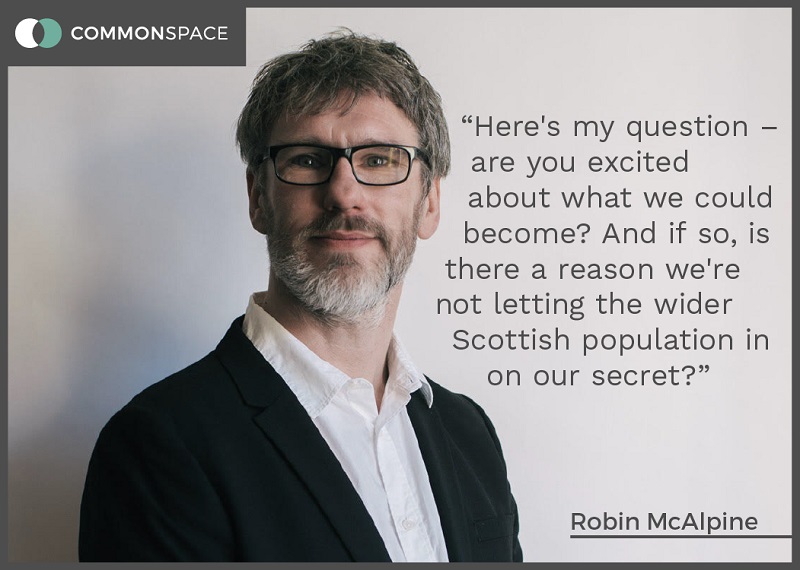 PERHAPS it says something about the kind of people I bump into but I can’t say I’ve picked up a lot of optimism about the year ahead – pretty well from anyone.

So let me kick off the year with something that I have become quite excited about again; Scottish independence. I know, I know – when was I not a ‘true believer’ … but sometimes you believe in things that don’t necessarily make you feel optimistic.

In reality, for much of 2017, many times when I thought about independence my emotion was frustration or anxiety or exhaustion. I don’t think I’m alone among independence supporters in the year past in beginning to see independence as a problem to be solved.

I don’t think I’m alone among independence supporters in the year past in beginning to see independence as a problem to be solved.

Well, I’ve been reminded that it is also an exciting opportunity right in front of us too. The stimulus for this ‘remembering’ was finishing off the first draft of a book just before Christmas.

The book (which should be published in the next month or so) is a summary of all of the work which has been produced as part of Common Weal’s White Paper Project. It tries as hard as possible to take a comprehensive and honest look about what things need to be done to create a successful Scottish state.

Throughout the project we’ve kept ourselves very constrained – while Common Weal generally does the ‘big vision’ stuff, in the absence of anyone doing serious leg-work on the technical process of independence (the ‘how do we set up a new country’ stuff), we did what we could.

And that meant that we had to try as best we could to restrict ourselves to a ‘policy neutral’ stance – this was not about what Scotland could become as an independent country but how to set up the infrastructure which would enable an independent Scotland to be created.

When we were thinking about setting up a currency, or IT systems, or a civil service, or an energy regulator, we constantly pressed ourself to produce proposals which, once implemented, could equally support an incoming Tory government as some kind of incoming socialist one.

Well, I’ve been reminded that it is also an exciting opportunity right in front of us too. The stimulus for this ‘remembering’ was finishing off the first draft of a book just before Christmas.

A lot of this proved to be a long, hard, technical slog – if I never again have to wrestle with the interactions between single markets, customs unions and borders with nations who are outside both, I’ll be very grateful.

But behind all the slog, it became increasingly hard for me not to be thinking ‘and then…’. And then, once we have a central bank, we could…

And then, once we’ve got a department of social security we could… And then, one we have a new tax system we could…

It reawakened something in me that I hadn’t noticed had dozed off – my excitement about what an independent Scotland might actually be like, feel like, look like. How would it be to live there, to have children there, to start a business there, to write a book or film a film or record a song there, to build a home there, to grow old there.

If you look at energy, then almost all the clever people know that the future is to integrate heating, electricity and transport into one smart energy system with localised generation and storage. It’s not going to happen in Britain (which needs a centralised system to lure Chinese investment). Scotland could do it – and it looks amazing if we do.

A cursory look over what Richard Murphy did for us on how to reform a Scottish tax system is head-nodder – as in, you’ll find yourself nodding your head and saying ‘yes, I’d like it if local businesses in my area were not paying three or four times as much tax as the corporations they’re trying to compete against’.

The prospect of a proper, generous Citizen’s Income in Scotland grows closer all the time. When people come to understand what that would really mean for them, many will see their future differently. Suddenly, that business you’d like to start is a feasible risk to take…

When you ask yourself ‘how do we want to be defended?’, bombing various Middle Eastern countries is not exactly a persuasive vision. But a proper costal defence system freeing us up to play a serious role in leading global nuclear disarmament?

Personally, I want to know when we’re just going to admit that telecoms is a core public utility like energy and the roads network – and we’ll nationalise the lot of them. Lots of countries have genuinely superfast broadband as standard. Imagine we had that – imagine what we could do.

For example, I expect it’s a matter of time before all phone and television signals will be going through high speed data cables rather than radio frequencies. This is a chance for Scotland to lead.

And if we want to be a leader, the opportunities in truly adopting the reality of an electric, driverless future for transport is where we should go. Frankly, we’re still tinkering around with vague promises on when we’ll ban new petrol vehicles.

In fact, we should be starting to think about how soon we need to prepare for banning human drivers altogether. The new transport network will be as different from what we have now as Spotify is from hanging outside Woolworths waiting for a new LP to be delivered. Why wait?

The list of what we could have – a properly regulated finance market with its new National Investment Bank, an immigration and citizenship system of which we can be proud, a constitution that we build ourselves as citizens, a national public IT infrastructure which is actually fit for purpose.

And then you start to think about how to use all of this. Let me give you an example; if you spend 10 minutes looking at the minefield which is an independent Scotland’s exporting strategies when stuck onto a post-Brexit rUK, you’ll start realising that we should nationalise the port at Rosyth.

Almost everywhere you look, in almost every aspect of our lives, we’re seeing demands that ‘something change’, that the way the world worked before didn’t work for enough of us.

Our consular networks, our ‘citizen identifier’ (a replacement for National Insurance Numbers), a department for trade and industry, the ability to manage our own finances (including restructuring debt and treating monetary theory in a very different way) – these all need to be done.

But they are more than a task – they offer a window into a near future we could talk about. We could talk about this because all of this hits right at the heart of what people are screaming out just now.

Almost everywhere you look, in almost every aspect of our lives, we’re seeing demands that ‘something change’, that the way the world worked before didn’t work for enough of us.

It’s hardly worth pointing out that almost all of the kinds of things I’ve mentioned above are simultaneously very popular with the public and yet still (in Britain) denied to them as a realistic political choice.

But they wouldn’t be in an independent Scotland. They would be possibilities, options, reasons for hope.

It’s hardly worth pointing out that almost all of the kinds of things I’ve mentioned above are simultaneously very popular with the public and yet still (in Britain) denied to them as a realistic political choice.

How did we get here? How did we get to the point where I need to remind myself that independence isn’t simply a cause I believe in and need to fight (endlessly) to achieve, but an act that creates a place where I want to live?

Why is it that, over Christmas, when I told a teenager of my acquaintance that I honestly believed that my generation (working with his) could create a place we’d actually be proud of, I caught myself out with a sudden surge of enthusiasm and optimism?

I know some of you think that those of us who see independence as a route to a different and better future are conflating different issues (or, on your looney fringe, that we’re somehow ‘usurping’ the ‘noble cause’ of some prototypically true and pure ‘grassroots’ which just wants ‘freedom’).

The problem is, you’re all voting Yes already. And we’ve been running round your hamster wheel since 2014, talking over and over about who should lead and what vessel should be carrying us.

But where are we going? Your faith that there are 51 per cent of Scotland who would prefer it if we didn’t talk about anything that would happen so much as one day after a Yes vote is misplaced. But there is easily 51 per cent of the population who can be persuaded by a future they want to live in.

But they wouldn’t be in an independent Scotland. They would be possibilities, options, reasons for hope.

How did we give up on vision after 2014? How did we end up in a place where, in the last three years, we ran out of stories? Stories about our future, about our hopes, about our strength and ability to be better that we are now?

There are lots of us who have read and thought and got excited about where we could go next. My own little reminder has given me another boost, just about enough enthusiasm to get back in the trenches for the fights to come in 2018.

So, here’s my question – are you excited about what we could become? And if so, is there a reason we’re not letting the wider Scottish population in on our secret?