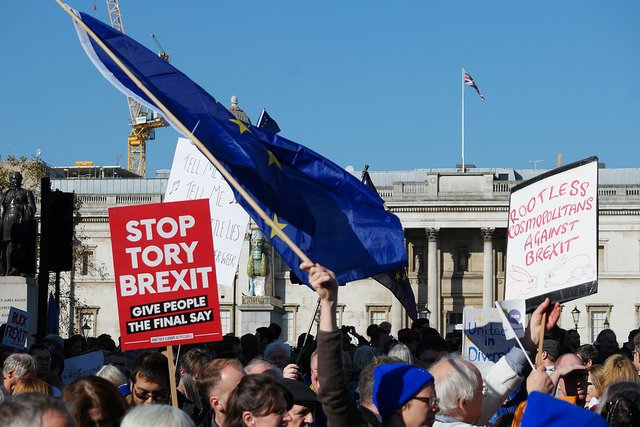 RIGHT, the ‘People’s Vote’ debate. Let’s start with an entirely dogmatic statement, which is true nonetheless.

In the short term, a second vote on Brexit is undoubtedly bad for those who want to see Scottish independence in the near future – irrespective of which side wins.

The reason for this is straightforward – absolutely every vote that takes place makes people want a break from thinking about political decisions for a while. In the event of ‘unusual’ democratic events (i.e. other than scheduled elections), this is even more pronounced. And if the campaign is an unpleasant experience (bitterly divisive) the effect is stronger still.

I’ve seen proper voter attitude surveys of the aftermath of the Brexit vote (in Scotland) and even Yes voters didn’t want another gruelling indyref straight after it.

Now if you’re reading this there is a good chance you have a particular interest in politics. You may be saying ‘but that’s irrational – if it’s Brexit again people will want out’. The reason you think this is because you have particular interest in politics. You probably thought there was going to be a big bounce towards independence after the 2016 Brexit referendum.

If you did you were wrong then and I’d put money on you being wrong again. Unpleasant referendum experiences (and Brexit was a much more unpleasant experience than the Scottish independence referendum for most people) are terrible ways to get people in the mindset for another referendum.

If there is a ‘People’s Vote’ (oh how I hate the condescension contained in that branding exercise) next year, there will be little chance of an independence referendum before 2021. And then we’ll find out at the 2021 Scottish election if Nicola Sturgeon’s ‘Scotland really, really loves the EU’ gambit has worked. The polls all suggest not.

Let me now turn to the morally outraged ‘Remain First, Independence Later’ group. They are entirely certain of the inherent morality and justice in overturning the vote to leave the EU.

In fact, they don’t need to justify it. Read what they write – the Leave Campaign lied so the vote was illegitimate. Of course, the Remain side lied too (where was the ‘Emergency Budget’ that we were told was utterly essential if there was a No vote?). But don’t complicate their moral certainties.

And for goodness sake don’t even try to get them to reflect on whether the destruction of Greece or the disinterest in state violence in Spain is moral because they ‘just know it in their heads’.

I’ve tried this. I’ve tried to have a debate with the ‘moral remain’ people – and it often feels futile. I raise simple questions like ‘how much do you actually know about EU procurement directives?’ or ‘do you understand the relationship between Europe’s bankers and the European Commission?’ or ‘are you aware of the scale and influence of corporate lobbying in Brussels?’.

The problem is, quite often the ‘moral brigade’ turn out to know little or nothing about the EU beyond some slogans. I’m not saying this isn’t a reason to support the EU – I voted Remain. I’m suggesting it is a range of issues which should be considered by anyone claiming the EU is unequivocally on the high ground.

It culminates in my favourite phrase – that they support the EU because they hate borders and protectionism. I mean seriously? The EU is arguably the world’s most protectionist block and its outer border is increasingly a razor-wire fence. Do you particularly mean ‘no protectionism or borders between white people’?

Like all giant and powerful bureaucracies, the EU is a hundred miles from being clean of hands. So don’t lecture me. Its embrace of neoliberalism played a not-insignificant part in the economic climate which has done so much damage to parts of the north of England.

READ MORE – Analysis: Pete Wishart is right – the danger of a #PeoplesVote to Scottish democracy is real

However, I’d be the first to admit that Westminster has done much more damage to those places, particularly though deindustrialisation and austerity. It’s done that damage to Scotland too. So how is it moral to prioritise the minor protections of the EU but not the major protection of getting out of the UK as fast as possible?

The answer to this, as so often is the case, is that Scotland is the ragged trousered philanthropist of Britain, a group that suffers disadvantage but which is always supposed to put the interests of others first, others who never put our interests first.

It is our moral duty to vote to save London Blairites and moderate Tories, not once but twice. But that comes with no moral duty to allow us to vote again on independence given that what we were promised last time (‘near-as-damn federalism’ and guaranteed EU membership) didn’t quite work out that way.

And are we supposed to take the sudden (and would it surprise you to hear ‘moral’) rush to embrace confirmatory referendums as a matter of principle? After all, you, me, them and the cows in the fields know it’s purely because they lost.

READ MORE – Caitlin Logan: Remainers should beware the consequences of a ‘People’s Vote’

Let me be clear here – I’ve nothing against a second vote. I’m not that kind of hypocrite. I’ve been consistent on this since 2013 when people started asking; in a democracy the people have a right to vote to change their minds – as many times as they like. The manager class may not like it, but the manager class seems to like democracy only when it gives them what they want.

And those who think that access to Erasmus for middle class children trumps the right to escape austerity on behalf of working class children need to explain themselves.

So let me be clear – if there is a ‘People’s Vote’ I’ll probably vote like I did in the Brexit vote. But I’m not going to be guilted or shamed into being told that my strong preference to bypass the need by having another independence referendum is an ‘inferior position to hold’.

Let me make another prediction; the fear-mongering by the Remain crew will backfire. It’s hard to explain how ill-founded are some of their views on this. Take the ‘giant queues at Dover’ argument. That could be true – if post-Brexit the Westminster Government decides to cause giant queues at Dover.

If it wants to (i.e. as it probably would), in the event of a No Deal Brexit the UK can behave like there was a deal and let EU goods cross the border. Just as with the total certainty that the Brexit vote alone would crash house prices (which didn’t happen) or that the economy would tank (which didn’t happen), what happens when the Remain ‘cliff edge’ arguments turn out to be hysterical?

They will, because the Remain side has jumped on every worst prediction. And worst predictions are exactly that – a long way from the most likely outcome. So what for the ‘come March it’ll be so bad independence is in the bag’ arguments if it doesn’t happen, like it almost certainly won’t?

(I’m not suggesting Brexit won’t be bad, eventually. It just won’t be that bad or be bad that quickly.)

Just to remind you – the single biggest disaster for the independence movement since 2014 was the certain prediction that we could blithely announce a referendum on Brexit morning because we knew exactly what would happen and how everyone would react. And we were dead wrong.

I am friends with lots of London’s liberals. I genuinely feel for them. I feel for them in the way I really felt for the working class people of the north of England when London royally fucked them while the liberals did nothing about it. It is really rotten to feel that you are in a country that doesn’t share your values, that doesn’t care about you.

That’s how Brexit voters will feel if their democratic victory is overturned. That’s how I feel about being stuck in Britain’s perma-austerity, with the rest of us constantly sacrificed to the needs and wants of London.

So, to the People’s Vote supporters, I have no problem at all with you fighting for a second referendum. If there is one (there won’t be) I’ll probably vote with you. But if you really believe that your desire to join Europe is more principled than my desire to leave Britain I reserve the right to consider you to be a solipsistic, self-righteous arse.

And if you’re an independence supporter who still (still, after everything) thinks that Project Fear around Brexit with wild exaggerations about catastrophes being imminent is the route to independence, then I wonder if you’ve got as much faith in the positive case for Scotland as you should have.

SNP – no support for a ‘People’s Vote’ without a guarantee of Indyref 2.