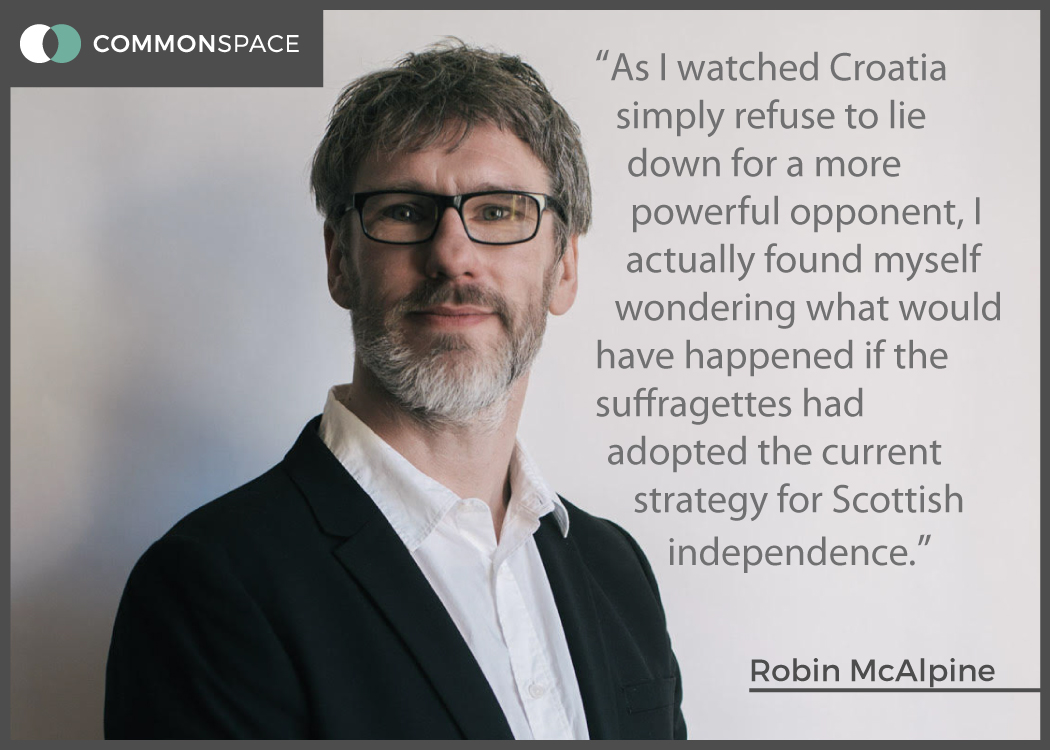 Common Weal director Robin McAlpine says Scotland should take some inspiration from the Croatian football team, and remember that no underdog has ever won with a fearful mindset

THERE’S no doubt that Croatia has some very good footballers. But they nearly won a world cup in which they were behind in every single knock-out game and had to fight it into extra time on each occasion to win.

I watched the players from this small nation of four million people spend much of the World Cup final on the front foot against the might of the dominant French football machine. I liked to imagine that, had Scotland got there instead, we could have shown the same drive and will to win.

But somehow, even allowing for the current gulf in football talent between Scotland and Croatia, I found it hard to convince myself that Scotland is a nation which currently demonstrates the necessary determination, on or off the football field.

It brought to my mind the words of a former Scottish science advisor who described Scotland as in a race to finish second – that we’ve become so shorn of the will to take the chances and risks necessary to win that in so many areas of public life we are content with a ‘respectable’ mid-table finish.

READ MORE – Analysis: The all-encompassing liberal ideology of seeking a return to ‘normal’

There are times when this seems almost endemic to me. We just seem to accept things I just don’t know why we accept. From the assumption that our renewable energy resources will be owned by other people’s multinationals to the expectation that our film industry is just a pretty backdrop for big American productions, we never expect to be in control.

I’m afraid this just sits uncomfortably with me. The older I get the more I realise how deeply the idea of ‘quiet, firm determination’ was embedded in my upbringing.

Partly it is a legacy of a traditional west of Scotland (and yes, largely male-orientated) culture. I did my sixth year English dissertation on Willie McIlvanney. Tam, eponymous hero of the novel Docherty, reflected much of the small town culture I grew up with.

Renowned as the ‘hardest man in town’, he had a strong moral streak, never raising his fists in the name of an unjust cause. But what I remembered was a conversation between two other characters.

Tam wasn’t the town’s best fighter; he was the one least willing to lose.

I also played a lot of rugby when I was younger, and that was formative. I remember playing for promotion from divisions three to two against a team much better than us. Against the odds and through sheer willpower, we won.

Already I’m sure that there are those who will write this off as out-of-date male machismo that should be confined to history. That is not my experience.

Because other formative parts of my life were spent among peace activists. I saw respectable-looking middle aged women dragged from the ground and handcuffed by the police for peaceful sit down protest. As a child I swear it was the police that looked scared and the women who seemed so strong and unwavering.

From the women who organised the Glasgow rent strikes to Nelson Mandela, from Gandhi to Black Lives Matter, the people I have respected most were never that keen on giving up, didn’t seek permission, didn’t ‘wait and see’.

As I watched Croatia simply refuse to lie down for a more powerful opponent, I actually found myself wondering what would have happened if the suffragettes had adopted the current strategy for Scottish independence.

They’d have proposed a bill to allow women to put a cross on a ballot paper, but the women would have to ask their husbands for use of a pen. And in any case, we’d still be waiting for them to make an assessment of when the time was right to do anything about it.

Of course all this uppity behaviour is frowned upon by the modern political consensus which believes that society is a result of technical management by a governing class which need never raise its voice.

But then, you don’t really need determination or fighting spirit if you’ve got all the money and all the power; quiet compliance looks very attractive from up there. They have developed a lot of insulting names for people who get above themselves, one being ‘nationalist’.

They celebrate ‘softness’ and ‘stability’ precisely because it means no change. They don’t want the Scottish public to benefit properly from its renewable energy resources and so complaining about it is ‘grievance culture’. Unjust patterns of land ownership can be tolerated because doing anything about it would be ‘vindictive’.

Big finance may have ruined lives through criminal activity, but pursuing perpetrators through the law would be ‘cheap populism’. Saying no to the cheap-and-low-quality import strategy of a supermarket chain is ‘isolationism’.

In Scotland, the grip of this ‘get back to your sofa’ mentality has a long precedent. Common Weal will soon publish a study of Scotland’s historical outward migration patterns. No other country in the world would tolerate what we’ve tolerated – but it’s expected of us.

We do not live in the end days of human civilisation (or at least I hope we don’t). Things will change, one way or another. We are not a tweak or two away from solving our problems. Compliance is not a strategy that is going to fix things.

This week I met with the Poverty Alliance which was a salutary reminder of where we really are. One in four Scottish children grow up in poverty. And do you know what our official national ambition is? That this should be reduced by ten per cent by 2030. Which, with a little bit of rounding, means that in 2030 one in four children will live in poverty.

READ MORE: Better Than Zero campaign calls for strikes against Amazon to extend from mainland Europe to UK

I sometimes think we’ve traded our will to be better for a pat on the head from the powerful. Well done Scotland, you’re a very amenable country. Says Amazon. While imposing “intolerable working conditions” on its low-paid Scottish staff.

So yes, Amazon beat us today. So did Iberdrola (who owns most of our energy system). So did the big property developers. So did the Daily Mail’s Brexiters. So did our absentee landlords.

What I want is a Scotland where, if they want to treat workers like shit, profiteer and avoid tax, siphon off wealth that should be shared with the people of Scotland and throw money at lobbying so they always get their way, they know that beating us today isn’t enough.

“Personally, I’m not prepared to stay down. The bigger the change we want, the more determined we must be.”

I guarantee you that not a single Croatian player walking onto that cup final pitch was congratulating themselves for their basic competence. They weren’t compiling match statistics into a press release to show how losing was actually a bit like winning.

Scotland is filled, stuffed with people who show steel and determination every day. I just wish they were running the country and its many institutions and agencies, because we seem far too comfortable with mediocrity.

Personally, I’m not prepared to stay down. The bigger the change we want, the more determined we must be.

PODCASTS: Acces all of CommonSpace’s podcasts on our SoundCloud page here