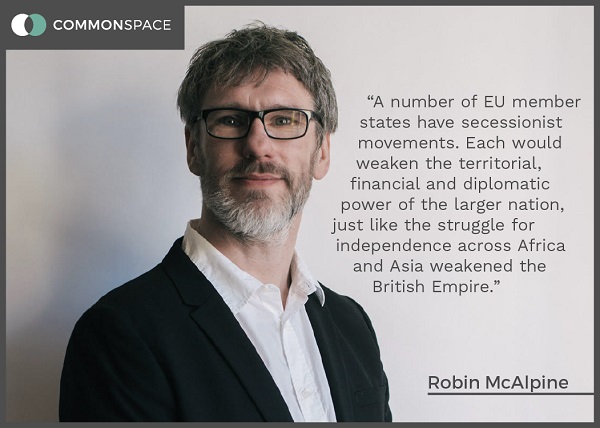 THE unfolding hostage situation in Spain took a nasty turn this week when a number of people who should know better took the side of the hostage-takers.

As seven million people were told that they and their land should be considered the indivisible possession of an entirely different 40 million people, it was made clear that they have legally defined freedoms. They are free to go to the bathroom, they’re just not allowed to leave the building. Or vote.

(But, cheerily, the Spanish Government has divine approval through King Someone-Or-Other, anointed via his magical blood which itself is a direct gift from God. Would anyone like sugar with their Dark Ages?)

To understand all this we must look at the response of the EU and the UK.

To understand all this we must look at the response of the EU and the UK. The EU expressed ‘concern’. This is not ‘concern’ as in ‘this is a nasty situation and we should do something about it’. This is concern as in ‘whatever…’.

Both rattle on about human rights-based underpinnings, and claim to be working from the best set of rules available to humanity. And so they do – on one condition; that human rights don’t interfere with the interests of sheer, unadulterated power.

When they do, there is always a loophole. Always. At least in the olden days kings and emperors had the honesty to admit that it was always about the ability to inflict violence and repression.

The EU expressed ‘concern’. This is not ‘concern’ as in ‘this is a nasty situation and we should do something about it’. This is concern as in ‘whatever…’.

This whole affair seems to me to have very little to do with constitutional politics in Scotland. This is a purely democratic matter. Over and over I have heard people declare that the Catalans are the baddies because the law and the constitution are on the other side.

And do you know who was, in their day, on the wrong side of the law and the constitution? Black African slaves, Jews facing genocide, women who wanted to be able to vote, gay men who wished to live their lives openly, Rosa Parks, Gandhi, Mandela, Jesus.

I can’t think of anything that has been said as direct criticism of the Catalans that wasn’t said as a criticism of all of these other groups – selfish, divisive, uninterested in others, contemptuous of the rule of law.

“But these damned Catalonians are doing all this just because they want to wave a flag,” cry the sophisticates, seeming entirely comfortable with setting themselves up as the sole arbiters of what it is OK to believe in, to hope for.

I mean, all those gay men causing all those problems in the 1970s and 1980s and for what? So they could kiss other men? Selfish, divisive, uninterested in others, contemptuous of the rule of law.

But the Catalans have brought a lot of this on themselves by being, well, unpleasant, right? A bit arrogant, perhaps? Hmmmm. Just for clarification, my revulsion at the Holocaust is not based on how pleasant the Jews were or weren’t.

Europe is peppered with secessionist movements and I’ve got to know quite a few of them – Flanders, South Tyroll, Veneto, Sardinia, Basque, Catalan, Welsh. Sometimes, because I support Scottish independence, I’m asked to defend them all.

This always strikes me as very strange. Whether I like or don’t like each of these movements seems of vanishingly small significance. I accept them, and I recognise their right to pursue what they believe through peaceful action.

And the Catalans have been impeccably peaceful, even in the face of brutality. Surely we aren’t yet at the point where civil disobedience is considered ‘asking for it’ – yet the Spanish Government is talking about ‘sedition’ prosecutions. Are there to be no political tools left for those without power?

The single biggest achievement of the post-war period was the emergence of the concept of universal human rights. We are blasé about this, but really for the first time in history we codified the idea that there was more to justice than a sword. Unless you are sitting in a governmental office or have a large and well-armed militia behind you, you should be eternally grateful.

Suddenly the concept of right and wrong became structured around you and your neighbours, and their neighbours. A tricky concept, no doubt – but absolutely, certainly worth the fighting for.

These rights are not perfect. They were ratified by nation states who stuck in some useful caveats. In the Catalan situation, all seven million people have the right to self determination – unless the nation state deems otherwise through its constitutional court.

But go and read them. Last year I spent an utterly captivating evening in Gladstone’s library in north Wales at which, in the setting of hazy, early summer sun through stained glass, a series of inspiring figures stood in front of us and recited poetry or similar readings which for them invoked the concepts of democracy and human rights.

I think none was more moving than the woman who stood up and read for us extracts from the Universal Declaration of Human Rights. The sheer utopian wonder of this document hit me with a force that caught me entirely unprepared.

And we should be grateful – very grateful indeed – that one generation at one moment had the nerve, vision and commitment to create this. I fear that in the 2017 version of humanity, Trump and all, there would be more chance of Count Dracula springing to life than a universal statement of human rights.

But given that only slightly over one in 10 people alive today live in a properly functioning democracy, and that even in these countries democracy becomes ‘flexible’ when in direct contact with other forms of power, a human rights-based interpretation doesn’t adequately describe the world.

A number of EU member states have secessionist movements. Each would weaken the territorial, financial and diplomatic power of the larger nation, just like the struggle for independence across Africa and Asia weakened the British Empire.

When it comes to supporting democracy, we don’t have an endless range of options. If it becomes ‘the right to self-determination, except…’, where next?

I’ve heard people equivocate about the Catalan situation based on antipathy to the Catalan cause. They strain, Trump-like, to say there is blame on both sides. But it sounds to me uncomfortably like them trying to feel better about seeing a grandmother smashed in the face with a police baton.

When it comes to supporting democracy, we don’t have an endless range of options. If it becomes ‘the right to self-determination, except…’, where next?

It’s borders or empires. It’s rights or repression. It’s standing with someone you don’t like or allowing them to be hit with a stick. It’s accepting divisiveness or imposing tyranny. It’s democracy in all its messy reality, or one day it’s a constitutional court telling you what you’re allowed to believe.

Throughout history all of my heroes have fought against laws they believed to be wrong. I believe people have the right to self determination, and it isn’t my business. I believe that the bits of history worth celebrating have almost all been the battle of people against power.

If the Scottish Tories were banned from existing by a constitutional court, I’d march side by side with them in protest. So why is it so hard to accept Catalonia’s desire to be a nation?