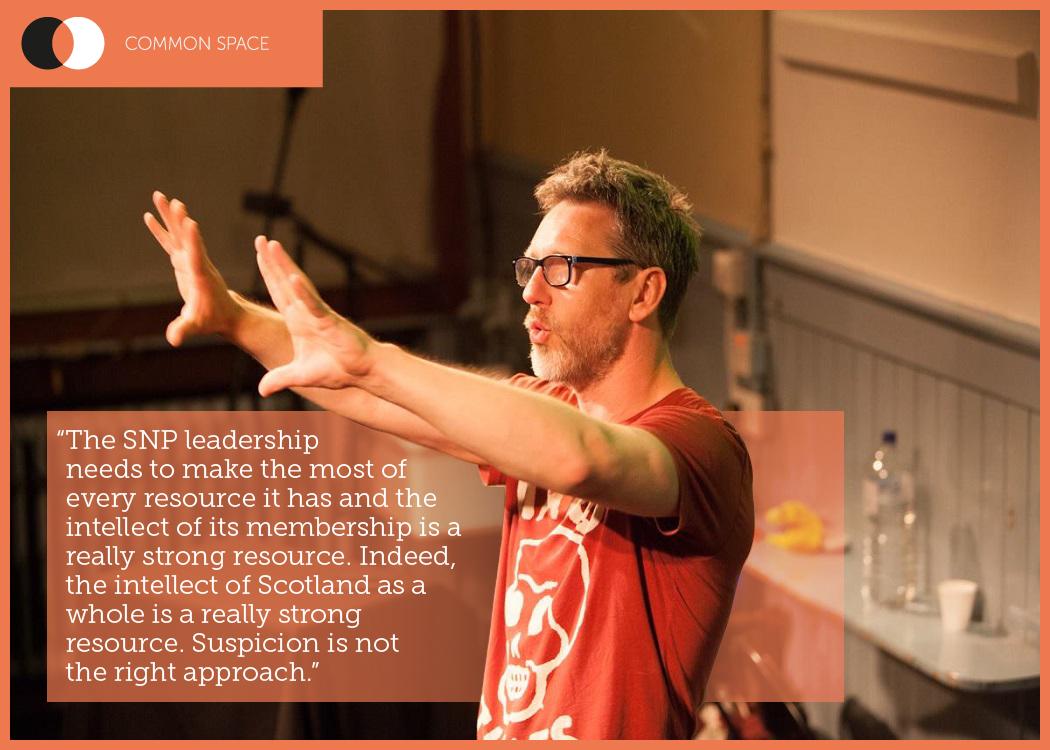 YOU’VE probably never heard of the Special Law of Curvilinear Disparity . To be honest, neither had I until recently when it was rolled out to ‘prove’ that all Jeremy Corbyn supporters are basically wrong about everything.

It’s supposed to show that party elites should ignore their own parties because their members can’t think properly. I want to argue that not only is this ‘law’ wrong, but ignoring it is the best thing both the SNP and the independence movement can do.

The theory of ‘curvilinear disparity’ divides the ecosystem of political parties into three notional parts. First, there’s the party elite. They have a very personal vested interest in power and are therefore pragmatic above all.

The Special Law of Curvilinear Disparity supposed to show that party elites should ignore their own parties because their members can’t think properly.

Then there’s the middle elite, the party activists. They’re ideologues who joined because they really believe in something – but for this reason are kind of weird. Finally there is the non-elite, the voters. They’re neither pragmatic nor ideologues but rational actors selecting what is in their best interests.

And then can we just largely ignore the rest of it?

Because the purpose to which this argument is currently being deployed is to persuade an embattled political elite which has lost the confidence of the wider population that in fact they were always right all the time after all.

They are clever and professional and know ‘what must be done’, not like the riff raff which join their party and mess it up with their damned hopes and beliefs. It’s why Tony Blair effectively abolished his party by taking away almost all the power that lay in the hands of rank and file members.

This argument is supposed to persuade an embattled political elite which has lost the confidence of the wider population that in fact they were always right all the time after all.

Constitutionally, the SNP is not like this. One of the popular unionist distortions about the SNP is that it is more-or-less an anti-democratic cult. It’s just hard to stand this up against a party constitution in which, at least in theory, any branch can propose any policy and if conference as a whole votes for it, that becomes party policy.

It’s also a little hard to stand up historically. I have in my office a pile of the SNP’s policy documents from the 1970s and 1980s. In the most part these are more radical than any other party from the era, pioneering Green policies and drawing heavily from Nordic innovations decades before it was popular. All the result of party democracy.

And even in the recent past, a time when voluntary party loyalty has been at its highest, the SNP leadership had to call in every favour and twist every arm to squeak through its wrong-headed U-turn on Nato against an angry party membership.

But is this now changing? At the SNP spring conference at the weekend long time party member Dr Malcolm Kerr was widely cheered for warning that the conference agenda was becoming “complacent” and “self-congratulatory” .

Now this is a conference a few weeks before an election. Common Weal decided not to make any effort to go to this conference precisely because ‘self-congratulatory’ is the default position of any political party this close to an election (and because it’s so damned expensive…). It’s hardly news that parties don’t make trouble for themselves with elections round the corner.

Constitutionally, the SNP is not like this. One of the popular unionist distortions about the SNP is that it is more-or-less an anti-democratic cult.

It’s just that much the same has been true for all their recent party conferences . I’m not the only person who has detected just a whiff of the Blair era control-freakery about this.

And there’s a very good reason why the SNP leadership should not be afraid of its membership – the party desperately needs big, good ideas. As Dr Kerr put it: “Scotland is looking to our movement for inspiration and leadership, not just competent management.”

There have been two major new policy announcements from the SNP in recent months – standardised testing for primary school children and the tweaking of the council tax . You can debate the merits of these two moves as much as you like, but you should at least accept two things.

First, neither of these policies are at all popular with the membership. As one long-standing party member put it to me privately and in hushed tones – ‘if anyone else had come up with mandatory testing of primary school kids, we’d already be organising a protest’. I’ve yet to meet an SNP member or supporter who thinks the council tax proposal is sufficient or well judged.

Second, neither of these proposals is supported by anything like a majority of the expert opinion in the country. In fact (and a bit alarmingly), the highest profile support for both has come from Scottish Tory leader Ruth Davidson. Educationalists and those involved in the commission on local government taxation are bemused.

I’ve been quietly trying to discover the genesis of both these policies. I’ve not had a lot of luck. In neither case does there seem to have been a clear process which produced these outcomes.

But is this now changing? At the SNP spring conference at the weekend long time party member Dr Malcolm Kerr was widely cheered for warning that the conference agenda was becoming “complacent” and “self-congratulatory” .

What I find craziest about it is that the SNP is now filled with people who have expertise in education, finance and local government. I know that many of those people want to contribute their expertise to helping the party produce strong policy proposals for the Scottish Government to consider. They’re scratching their heads, too.

Say what you like about the ‘ideologues’ that curvilinear disparity claims clog up the rank and file of political parties, had they been involved in developing these policies I am really confident that they’d have come up with something much better.

I believe the same to be true of the next phase of independence. I wrote a private paper on currency at the very early stages of the independence referendum (before there was a public position on currency). I shared it with the SNP leadership. It was received warmly and very politely, but I was told that there couldn’t be any chances taken with currency. There was unwavering certainty that no risk could be taken, hence the Sterling position.

The SNP leadership should not be afraid of its membership – the party desperately needs big, good ideas.

And now there is a chance to improve that position. I’m just not convinced it can be improved by the same handful of people behind the same locked door. It’s why I’m so much in favour of a revived Scottish Independence Convention which can look at these things in a multi-partner way.

Now I’m not naive. I know that democratic policy-making has its own problems. In the spirit of pre-election, equal opportunities criticism, the Greens can sometimes have a habit of going round and round and round in policy discussions in the belief that ‘one more time round’ can make it perfect.

I also wholly accept that a government and the political party from which the government is formed are not the same thing. Parties deal with longer timelines and the bigger picture, governments have to deal with constant change and endless detail. These outlooks will sometimes come into conflict and, generally, a government must be able to prevail.

However, I’m going to propose the ‘Inverse Curve of Generative Capacity’ (amazing what a pseudo-scientific name for your half-baked ideas can do…). It states that a certain number of people will only have a certain number of ideas in a given period of time. You come in with your A game, your big and best ideas. You use those up. Then you bring out your B game, the not as good stuff that was left over. And then you start recycling the stuff from both your A and B game but in a tireder and more insipid form.

Fresh blood is so important – and the SNP is flowing with it. The party leadership needs to make the most of every resource it has and the intellect of its membership is a really strong resource.

Then, worst of all, something bad happens, something you really, really have to respond to. And all you’ve got is what you’ve already done (as we shall soon see when central banks and governments have to deal with the next financial crisis with no interest rates to cut and no public money to throw at the failing banks).

Because if the response to GERS – a genuine and serious problem for advocates of independence – is cutting Air Passenger Duty (a very bad idea that will achieve next to nothing other then hand an awful lot of money straight to big businesses to pocket), we’re in serious trouble. Unless producing policies to cheer up Ruth Davidson is the plan…

Soon we’ll see the SNP’s manifesto. Perhaps I’m being premature. Perhaps the influx of talent will have inspired the party to an inspiring policy programme. My fingers are very much crossed that this is what we get. It’s just that neither national testing nor Council Tax 1.1 seem to bode well – and the proposed APD cut is profoundly worrying.

Because, to my mind, so much rests on whether this Scottish Government comes to be seen as vibrant or tired. And all the vibrancy it needs can be found inside its own ranks. It’s just not all wearing a suit.