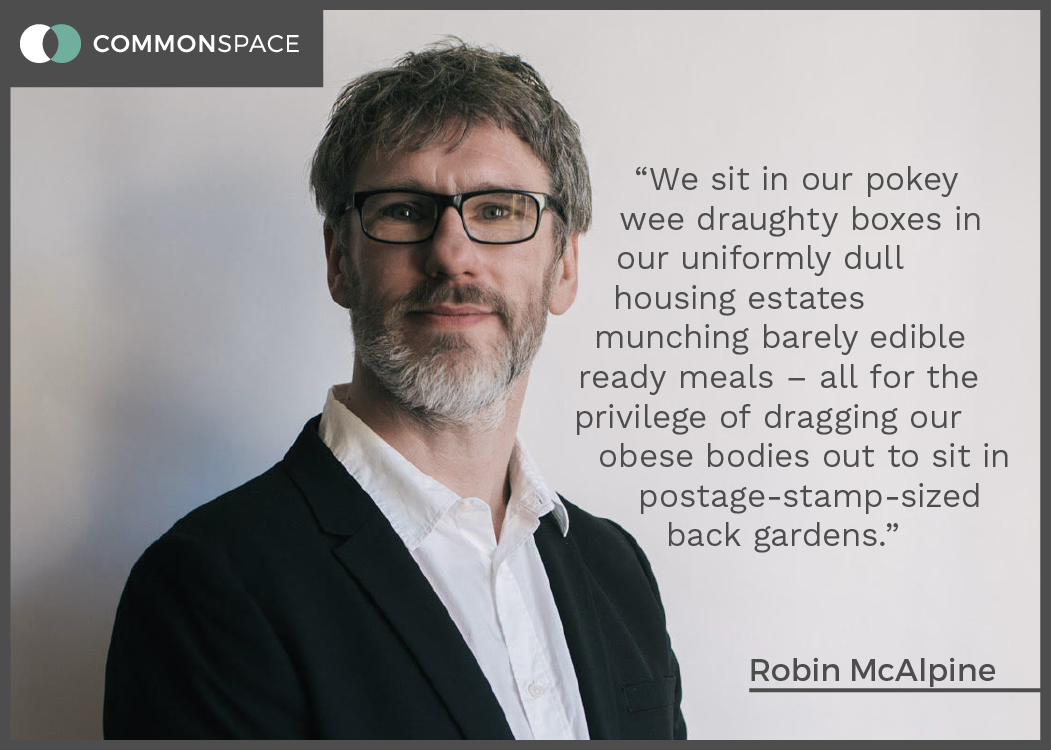 I’VE BEEN AT TWO important events in the last couple of weeks and each raised important questions about how we’re living in Scotland – and what we should be doing.

One was the Scottish Food Summit, the other Common Weal’s Good Housekeeping conference. Between them they paint a picture of Britain as a country which has got its priorities upside down.

The Food Summit was organised by the Scottish Food Commission as early preparatory work for what should be consulted on in the Good Food Nation Bill which is expected at the end of next year.

It was an interesting mix of producers, environmentalists, health campaigners, social justice and poverty organisations and retailers. There was a remarkable unanimity about the situation and the problems (although this was perhaps not shared by all retailers).

What do you care? You’re getting your milk cheap. But are you? Because you’re also paying in a whole lot of other ways for this ‘cheapness’.

Basically, the problem is that we spend far too little money on food. Over recent decades aggressive practices by supermarkets have pushed down and down on what producers receive for food production.

While supermarkets’ levels of profit are enormous, actually their margins are remarkably tight. They have become so financially powerful because of sheer volume of sales and because they have diversified into banking, fuel, clothing, entertainment and other new business streams.

But to entice people in they often run loss-leaders on food products, charging customers less than production costs in some cases.

So you go in to get cheap milk – and end up handing over much more of your money to the supermarket by buying fuel, a DVD or a toaster, perhaps some pants, stuff for your garden.

This is standard monopoly practice, using market dominance to push others out of business. But it weighs heavily on producers. Scottish milk farmers in particular are often expected to sell milk to supermarkets at prices lower then it costs them to produce the milk.

The result is that the average income from farmers in Scotland this year is about £12,600. That’s often a family income. Frankly, farmers ought to be becoming the new revolutionary socialists…

Still, what do you care? You’re getting your milk cheap. But are you? Because you’re also paying in a whole lot of other ways for this ‘cheapness’.

You pay in farmers’ subsidies to keep them alive. You pay because, much as farmers would like to invest more in modern environmental farming methods, they can’t on those profit margins. So over-farmed land causes all kinds of harm such as flooding, which you pay to clean up.

READ MORE: New subsidy for the building of private rented housing “a step in the wrong direction”

You pay because this undermines the Scottish economy. Imports have been at the heart of the problem, with mass-produced, heavily processed food being shipped in and putting domestic producers out of work.

That’s jobs you or your family might have. It’s tax income Scotland would have to invest in public services. It’s supply chains that would have created even more jobs in Scotland.

But perhaps above all you pay because you’re eating shit quality food. How many disgusting food scandals will it take before people wake up to what’s on their plate? At which point will obesity, diabetes and other health problems cost the NHS enough that a penny or two off a ready meal stops looking like a good deal? Oh, and good food just tastes sooooo much better.

That this is the state of affairs in a country with one of the best natural food systems in the world, amazing natural produce, a rich tradition of food production at every level – I find it truly heartbreaking.

And as someone who lives in rural Scotland, it is degrading our communities, our ability to sustain local economies.

So why don’t we do something about it? Because government is too scared to. On the one hand, everyone is skint after the worst decade for wages since the Napoleonic wars. On the other, the supermarkets and volume producers are aggressively litigious (as per the minimum pricing for alcohol saga).

But in truth the biggest problem is that we’re paying far too much for our housing. And Britain is about as expensive as it gets– especially if you’re renting (where it’s the worst place to be) or poor.

This was a theme that came up again and again in Common Weal’s housing conference – housing has become a financial asset which primarily benefits banks, speculators and the wealthy.

READ MORE: Ahead of housing convention, Common Weal calls for a reversal of privatisation

This is a dense and complicated subject but basically very actively boosting house prices has put more and more of our income into the pockets of banks, has backed almost entirely credit- or asset-based expenditure way beyond our means without which we’d currently be in recession, and has made it easy to get richer if you’re already rich.

It’s a gigantic con trick played on the British public, backed by a small minority who got enormously wealthy in the process and pushed relentlessly by governments who needed the illusion of growth and so just accepted this harmful, damaging growth as better than none.

It’s left us in some of the poorest quality, smallest, least well designed but most expensive housing in the world. Many of us are absolutely trapped by mortgages we can barely afford – and that is when interest rates are rock bottom.

So why don’t we do something about it? Because it means taking on the banks and the interests of some of the wealthy property-owning segment of the country.

And so we sit in our pokey wee draughty boxes in our uniformly dull housing estates munching barely edible ready meals – all for the privilege of dragging our obese bodies out to sit in postage-stamp-sized back gardens.

You probably think you chose this. You probably think the cheap prices of food and the high cost of housing are decisions you made, that you’re really the one at fault, and so you don’t really want to hear about it.

But you didn’t. This was all chosen for you. If I said that you could pay 20 per cent less on your housing costs and have nicer, warmer, roomier housing, and then you could spend that money on delicious, freshly-made, locally-sourced food that made you healthier and boosted the economy, you would.

That’s the life of an Italian or a German or a Swede. And it is not impossible for us to have. Over the next year in Scotland there is going to be quite a lot of thinking on both these issues.

There are lots of ways we could support local food production of a much higher quality. At the more radical end we should look at tax and tariff methods to ensure food costs what it really costs us (including the cost of transport and other ‘externalities’).

At the easy end, just reform public procurement so local producers are backed and supported with government contracts. In France, 90 per cent of the food in ‘public kitchens’ (schools, hospitals etc.) must be sourced organically and locally. In Scotland the threshold is, well, zero. It can all be flown in from Poland.

In housing, we need to build more public rental housing, adopt a policy of actively resisting more price rises (and stop fuelling those rises with public policy). We need to increase size and build standards and come up with different financing models to make housing more affordable.

In Scotland we’ve become rather adept at giving the impression of tinkering around at the edges of things which are worthy but a bit marginal – while ducking all the really big and important questions.

Over the next year there is a chance to look seriously at two of the most fundamental questions there are – how do we shelter ourselves and how do we nourish ourselves?

There is a wide coalition in Scotland on both subjects who would like to do things right, facing a powerful minority of commercial interests who really want us to keep on down this crazy road until we’re so fat and our houses so small that they might more accurately be considered clothing.

So what is it – warm words for cold tenants? Or will we actually do something.