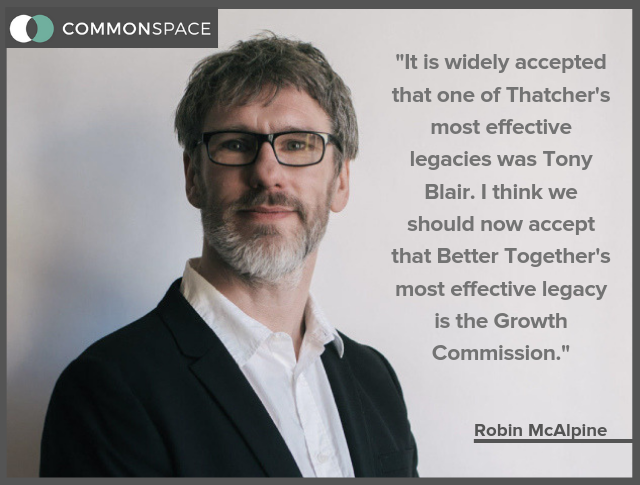 IS BETTER TOGETHER taking over the SNP? The party’s new spiritual leader (Andrew Wilson) was on BBC radio quite openly telling Scotland that independence will be pain and sacrifice, that Britain is a fine economic and political institution and that Scotland shouldn’t get above itself with talk of its own currency.

In what way exactly is that not something Alastair Darling would say? I mean, was ‘independence could possibly work out in 20 years but it will be really painful in the short term’ not more or less their entire strategy? How is ‘better through shared sovereignty’ not the same as ‘worse if independent’?

The speed of the u-turn being attempted by the SNP is remarkable.

The line in the Alex Salmond era was ‘of course Scotland is perfectly capable of starting its own currency, but a formal Currency Union is the preferred option’. This was definitely not my preferred option, but I could live with it.

That’s because a formal Currency Union was at least a credible, feasible solution, and so long as the terms were properly negotiated need not have locked us out of our own currency.

The new position is something like the opposite. Andrew Wilson proposes that Scotland is NOT currently fit to start its own currency and so for PR purposes we should put forward an uncertain, unstable, experimental monetary fudge.

I can’t live with this because I can’t credibly justify this daft solution. Neither can anyone else. Not a single SNP figure has made a serious public defence of the economics of Sterlingisation. SNP members are being asked to set aside their reservations purely on the basis of a spurious push poll.

I can’t live with this because, unlike the Salmond formulation, it actually makes clear Scotland isn’t ready for a currency (until six tests are met). I am among those who would argue that a country not fit for a currency isn’t fit to be independent.

And I can’t live with an outcome which seems to me designed to lock Scotland out of having its own currency for the foreseeable future. Please don’t listen to the nonsense about ‘there are six tests but we’re going to ignore them and launch a currency in the first four years’. It’s not that the people saying this are intentionally lying – it’s that they really don’t understand monetary economics.

I am absolutely damned if I can see how this position isn’t best summed up as ‘Scotland is a bit too small, a bit too poor and probably not quite clever enough to have its own currency’. As official SNP policy?

If members worry that it sounds like the party has completely lost faith in creating an independent Scotland which is a successful, vibrant modern nation (you can’t just say your confident if your eyes are full of fear…) they are told not to worry. The new ‘hope’ is that sometime hopefully not to long from now, Scotland will be a bit bigger, a little wealthier and a touch cleverer.

Until then our role is to prostrate ourselves to international bankers until we get their approval. Cry freedom, eh?

I really want to take head-on this idea that the Growth Commission isn’t austerity; please understand what it says. It says that the public sector deficit needs to be very sharply reduced – just like George Osborne said.

But to maintain a fig leaf of not supporting austerity it rejects five years of cuts and instead proposes more than a decade of effectively frozen budgets. A little less pain but for much longer.

Andrew Wilson believes that holding public expenditure to one per cent below the rate of economic growth is a sensible compromise because assuming we get growth of around two per cent a year we can cut the deficit and still manage a one per cent real term rise in public spending.

But that’s kind of what George Osborne thought in 2010 – and he failed. Anyone who doesn’t know that demand for public services will rise faster than inflation unless we invest to undo the damage caused by the UK economy shouldn’t be in politics. Ten years and more of keeping public spending below economic growth will be very painful indeed for a large number of people.

Then again, the Growth Commission is all about ‘comfort’ for bankers and certainly not providing comfort for the poor or even for the struggling middle classes. And anyone who thinks that Scotland can meet climate change targets while reducing public investment as a proportion of the economy needs carted off in a straightjacket.

Oh, and if you think I’m speculating, time to face reality. Have a look at this from the FT – a European nation without a formal monetary system can’t raise finance domestically to invest in its public infrastructure so is being forced to cut a financially damaging deal with China as the last desperate option.

(It’s behind a paywall – as a taster the headline is “Montenegro fears China-backed highway will put it on road to ruin“.)

While the party’s payroll vote tries to tell you it’ll all be OK, precisely the horrific impacts Common Weal has argued Sterlingisation will bring to Scotland are being experience right now in the real world by one of the few countries to use this system.

Will the Growth Commission’s supporters finally accept and face reality or is it going to be fantasy all the way from here to Scotland’s emergency bail-out from the IMF?

So the sole remaining justification for this SNP conversion to the ways of Alastair Darling is that one insubstantial opinion poll shows the proposal is wildly popular.

Here I start to struggle even to give the benefit of the doubt to the idea that this is an honestly held belief. Take out the unionists and the people who say it wouldn’t make a difference one way or the other and there is a few percentage points worth of people who seem to prefer this option.

But the opinion poll strongly led them to believe that this was about some kind of Sterling Union like the last time. Come back with an opinion poll in which an honest explanation of the proposal is put to respondents and they are properly exposed to the pros and cons. That might be meaningful.

No serious answers to any questions and everything based on a last-minute opinion poll which clearly does not show what they claim it shows – and this is the substance of the case for a rapid lurch to the right?

This is all an attempt to undo the 2014 independence referendum campaign, which was never sufficiently banker-friendly for some. Many people (me included) were told that this was all about moving the focus away from the progressive Nordic countries and towards right wing countries like 1990s New Zealand. This is an ideological reshaping of the independence movement from above.

But Stockholm Syndrome is no basis for policy-making and remodelling yourself as a centre right political party will not come without consequences. Having a little self respect would be a better starting point for this debate.