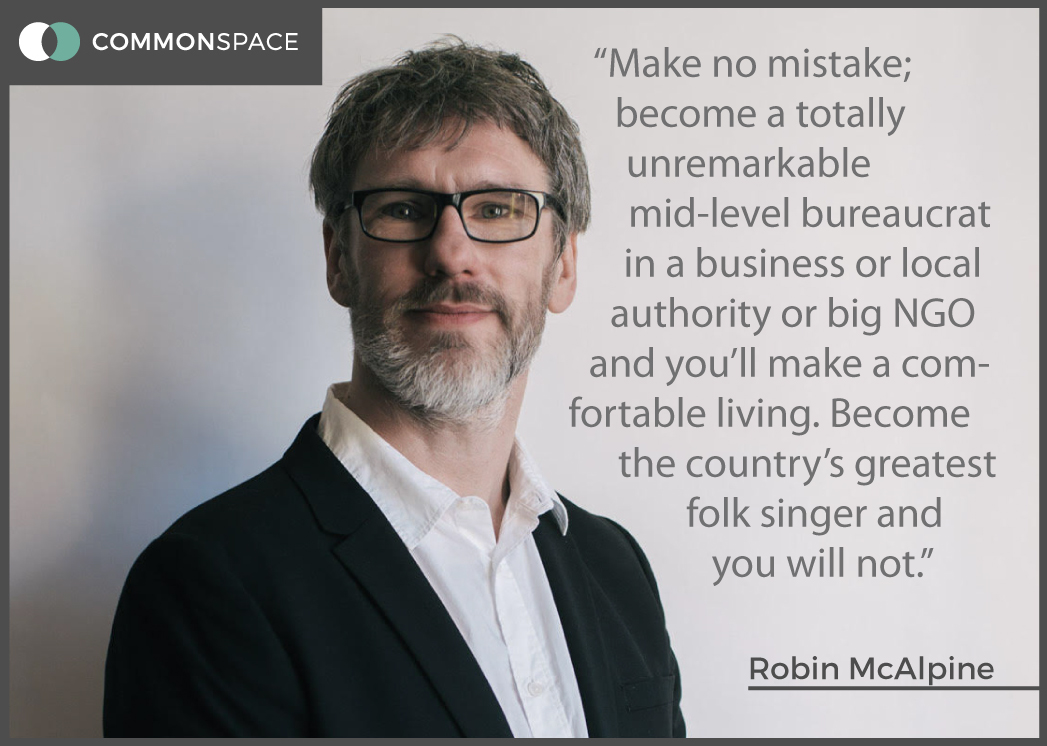 Common Weal director Robin Mcalpine argues our society does not place value on people with creativity and energy, instead rewarding mediocrity and bureaucracy

AT THE weekend I hunted out Karine Polwart’s truly wonderful 2012 album Traces for a re-listen. I’m glad I did. It reminded me how good it is.

But it also pissed me off. Not the music I hasten to add, the fact that what prompted me to play it again was an interview with Karine in which she talked about the financial difficulty of trying to make a living making music in Scotland.

Perhaps pissed off doesn’t quite capture the feeling. It’s more like a kind of angry despair, a kind of hopelessness. The mismatch between what our modern society values and what it seems to me is actually of value is so far apart that it makes me feel like a stranger or an alien.

I’ve worked in and with many aspects of life in Scotland. I’ve seen so many truly mediocre people so very well rewarded. I’ve met so many people with real talent and drive and vision. I’ve seen them struggle and often give up.

Make no mistake; become a totally unremarkable mid-level bureaucrat in a business or local authority or big NGO and you’ll make a comfortable living. Become the country’s greatest folk singer and you will not.

I used to feel this with some guilt when I was on the other side of the fence. I used to have a good (unnecessarily good) salary. I had acquaintances who were doing much richer and (to my eyes) much more important work who constantly struggled. It felt wrong.

I am very lucky to be regularly invited to go and visit brilliant community development projects all over Scotland. The people who run these initiatives are so often inspirational, visionary and passionately committed people. They are also so often somewhere on the road to some kind of burnout. It’s a hard slog.

In the political sphere I have, for many years, observed a loose inverse relationship between how much of real value someone delivers and how much money they’re making. I noted wryly at the time that everyone I can think of that I really rated as making an enormous contribution to the 2014 independence referendum suffered financially as a result.

I don’t really want to have a go at the many people who go to their work, work hard and do a decent job for a decent pay. But in certain sectors I do get annoyed at just how decent their pay actually is.

The arts is notorious for this. At the weekend I was talking to a well known Scottish actor about exactly this subject. He point out that the way to make a good living in the arts is to be a press officer or senior administrator. Under no circumstances be an artist.

In Scotland there are endless ways to spend what would be the equivalent of Common Weal’s (and CommonSpace’s) annual budget. In the university sector, at Scottish Enterprise, in one of the big accountancy firms or at some big retail development that is the kind of money they would spend and you literally wouldn’t notice any difference at all.

Universities are (I’m afraid) a case study in what has happened here. The sector put in a lot of effort over the years to make sure universities were not designated as public bodies. One of the spin-off benefits of this is that university principals felt free to choose their own salary comparators, usually in the business sector.

I worked in the sector for a long time and I knew many university principals well over the years. In private many were embarrassed at the profiteering of some of their colleagues. But I noted with dismay that some of them managed to get over their embarrassment when accepting a large pay rise the year before they retired.

Why is that so important? Because their pension is based on their final salary – a 20 per cent pay rise in that last year resulted in a 20 per cent rise in their pension for the rest of their lives. And when the senior academics looked upwards and saw the money to be made they too wanted a slice of the pie. I don’t particularly blame them.

Much of the public sector is in the same category these days – second jobs and big bonuses for delivering the day job responsibilities were not a part of public life when I first started out but are now routine. Trade unions and NGOs are hardly slouches in rewarding themselves either.

Common Weal argues that a better future comes from better wages. But there is a giant caveat to that – it has to be better wages AND better levels of economic equality. A mid-level arts administrator on £50k is not really what we meant.

Remember the average household income in Scotland (for entire families) is about £24,000 a year. That’s not the median – well over half of the households in Scotland live on less than that. This is our reality.

So if you are reading this and thinking your £50k salary is reasonable and modest, ask yourself what that says about the roughly 95 per cent of Scots who live on less.

And if you haven’t caught up with the fact that, give or take, only the privately-educated children of the wealthy get to be rock stars or film stars these days then you don’t understand Britain any more.

The university sector shone a light (for me) on the problem. Why is this wealth-hoarding happening? It’s partly ideology. Despite the fact that very few university principals in Scotland (i.e. none) are poached from leading US universities, they persuaded themselves that ‘this is the market we must play in to get the best people’. It’s not at all true.

READ MORE – Briana Pegado: We are facing a cultural crisis if the creative industries do not become more diverse

But the more accurate problem is that wealth-hoarding happens because it can happen. If someone can make themselves richer, they generally do. Hell, I was in the half of the staff in my old organisation who got the accountant’s presentation on how to game the pensions system such that I could avoid enormous amounts of tax. The admin staff got the other presentation…

(I didn’t get close enough to retirement to get to the ‘gaming the system’ part, in case you’re wondering. My pension plan is currently Nectar Points.)

We need to ask ourselves why what we value is so often not what we should value, why money so often finds its way to people who already have enough. We need to fund arts and activism and community development and creativity and thinking and doing.

A Citizens’ Income would be a giant step. Better funding for artists, better funding for community projects, some funding (any funding) for the many social movements that work on a shoestring, an economy designed for small businesses – all would make a difference.

An aggressive crack-down on out-of-control pay at the top of public bodies would be a start; that and substantially more tax on other wealth-hoarders could pay for it.

But we won’t. In 50 years people will still be listening to Karine Polwart. They won’t be able to name you a single staff member of an average Scottish quango. Ever.

If we get the society we deserve through what we value then perhaps we do indeed deserve this corrupt, wealth-grabbing, Instagram-fake plastic dystopia that stretches out ahead of us. I wish I believed that the future lay with the artists and the activists and the people who make and grow and build things and the real entrepreneurs.

I really wish I believed it.