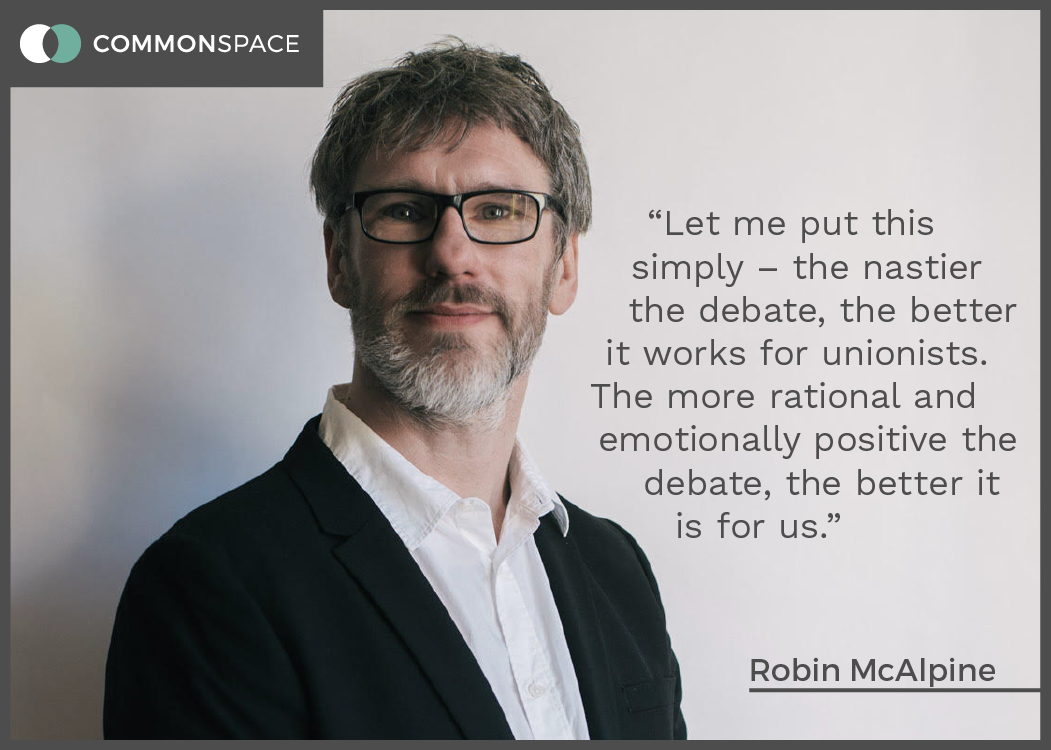 Robin McApline, Common Weal Director, argues in his weekly column that the left and independence movement needs to rediscover how to connect with individuals on an emotional level to convince them

I DON’T think that many people would mistake me for someone who has any interest in matters New Age (what do you do with all the dreams your dreamcatcher catches?) much less someone with patience for consultancy-speak (and I think this position is MECE).

But actually ‘ways of seeing’ techniques are ones I find quite useful. Most situations can be seen or understood in at least two different ways, and the way you chose to see it will impact on how you approach the problem – and how successful you are at fixing it.

In political strategy this is generally known as ‘framing’, though similar approaches are now routine throughout many aspects of life. You might find it useful to apply some of them to the kinds of big issues that we’re currently facing in Scottish politics.

I perhaps first became really concious of this approach many years ago when I did a two day course on negotiation. When I went into the training I thought they’d teach me how to ‘beat’ the person I was negotiating against.

It was very much a revelation to me when I was shown that it works better if I try to work out how I can give the other side as much of what they want as I reasonably can. It lazily became known as ‘win win’.

The quote that really stayed with me (though I’m paraphrasing from memory because I can’t find a reference) was from miners’ leader Mick McGahey who described negotiating as “give them the roughest ride of their lives, but make sure they have the bus fare home”.

It’s not just in your negotiating opponent’s interests to be able to go back to their constituency with enough to save face – in the long run its in your interests too.

I’ll admit that it was an eye-opener for an, eh, ‘energetic’ young man who had been brought up in a confrontational west-of-Scotland-male culture.

Over the years I’ve used it quite a lot. For example, I know that I can be excessively single-minded, that this can make me impatient and that I have a short fuse. This can be a real drawback in my line of work so I’ve needed coping techniques.

Sometimes when I’m especially angry with someone and I’m starting to see them as some kind of stereotypical ‘villain’ I’ll do the following. I imagine me being horrible to them. I imagine them going home to their partner or their children or their cat or whomever is their loved one – and I imagine them crying.

They stop seeming like a villain – in fact, it starts to make me feel like a bit of a villain. Generally, it really does make me pull back from being nasty.

“I’ve spoken to people in the SNP who feel instinctively that they’re not quite connecting with ordinary voters in the way they were a couple of years ago and they’re not entirely sure why.”

Right, so far, so self-help book. What does this mean for Scottish politics – and in particular the left and the independence movement? Let me give you two examples where I think we’re getting the framing wrong – and why it would help if we could get it right.

First, let’s pick domestic politics. I’ve spoken to people in the SNP who feel instinctively that they’re not quite connecting with ordinary voters in the way they were a couple of years ago and they’re not entirely sure why.

This is a common problem for governments. It’s because for a whole host of reasons, governments are encouraged to see the world in front of them as a ‘system of problems’, a kind of technical challenge to which it is their job to find the solution.

That’s not necessarily a bad thing – at Common Weal we regularly try to take a ‘systems’ approach. The problem comes when you think that everyone else should thank you for it.

This is precisely the problem the Democrats have got into in the US. For years they have been trying, effectively, to build themselves into the system. That they sold Hilary Clinton as ‘most qualified’ to run the system shows an acute version of the problem.

Why? Because systems don’t vote. If you’re lucky ‘the system’ will give you a campaign donation – but you won’t see it at a polling station.

What you need to do is rethink the same problem but see it as a series of people and the lives they live. You may need to take a systems approach to solve the problems that real people face, but you can only understand success and failure in terms of its impact on individuals.

“Politicians often come to believe that the public will thank them for saving ‘the system’. Trump shows that if you even give the appearance of caring about ordinary people’s lives as they are lived, you will be rewarded.”

It’s the Alastair Darling problem. He thinks it was a great success that when RBS told him they were going to run out of money that afternoon, he used lots of taxpayer money to save them. From the system perspective he was probably right.

Looking at it from the taxpayer perspective the question is how he let the bank get to within hours of collapse. After all, he was in charge of the regulatory system that was supposed to make sure that didn’t happen.

Politicians often come to believe that the public will thank them for saving ‘the system’. Trump shows that if you even give the appearance of caring about ordinary people’s lives as they are lived, you will be rewarded.

So a note to the Scottish Government – your aim to reduce the system-wide attainment gaps in education are laudable. But since you never really talk about what this means for an actual person and their actual child, how it makes their life better, their child happier, don’t be surprised if gratitude doesn’t follow.

‘Centerism’ or ‘the moderates’ are ways of denoting a politics that thinks the plebs should be grateful when the system protects itself. And, electorally, it’s dying on its arse. People should take note.

A second key example is how we think we can win the independence debate. For all sorts of reasons (not least bloody social media) we seem to have framed all constitutional debate as if it was a boxing match.

If only we could land that killer blow on Kezia/Ruth/David/whomever, then the public will realise we’re right and they’re wrong. So we endlessly, endlessly attack and complain and correct and hold to account and all of that.

Fine, some of this needs to be done. But pull the camera back for a wide shot. Who’s watching your knockout blow? Are you sure your blow is as decisive as you think? Is there any chance that it looks a bit more like the two of you are rolling around in the mud, poking each other in the eye?

So frame it in another way. Rather than ‘boxing Ruth’, think of it as if its a jury trial, with the public being the jury. You’re not trying to beat the other side, you’re trying to persuade the jury. Its not a shouting match with unionists, its a conversation with the public.

“Rather than ‘boxing Ruth’, think of it as if its a jury trial, with the public being the jury. You’re not trying to beat the other side, you’re trying to persuade the jury. Its not a shouting match with unionists, its a conversation with the public.”

Now of course you need to take account of what your opponent is saying and you can’t allow misinformation to go unchallenged. But how would you do it in a courtroom? Remember, hollering “you can’t handle the truth” at the prosecution (and by extension the jury) does not win you trials.

The more effective approach is to listen to what your opponent says, take a second to think about it and think about the clearest, simplest, most sympathetic way you can challenge the claim made.

Then, take a breath, look up at the jury and calmly and assuredly say “OK, what you’ve just heard from the opposition is…” and try concisely and with minimum hostility to put their argument to bed and take the jury with you where you would like them to go instead.

This is especially important for independence supporters because to win, all the unionists need to do is turn off enough people so they don’t even listen to the debate. In fact, that is pretty well a precise description of their entire post-Brexit strategy.

We need people to pause and engage and rethink. Eye-gouging is not well known as a means of making that happen.

“You know the old saying that if your only tool is a hammer, all your problems look like nails. We can’t afford to live in a land of nails. We’ll never be able to hammer our way out.”

Explaining that a Citizens’ Basic Income is a necessary systems response to changing income distribution factors – or tell people how it could transform their lives. Influencing a journalist or a civil servant or a politician by thinking about how your day is going or by trying to picture how their day has been.

The left has been bad at this. The centrists used to be much better at it but they’ve got lost so far up themselves that it has stopped working. The right is all over the place. As Trump shows, the group who get it right first might well win.

The independence movement used to be much better at this (wish trees and all that). But we’ve got worse the fewer the tangible things we’ve had to keep us focussed.

You know the old saying that if your only tool is a hammer, all your problems look like nails. We can’t afford to live in a land of nails. We’ll never be able to hammer our way out.

Let’s try and look differently. You might be surprised by what you see.