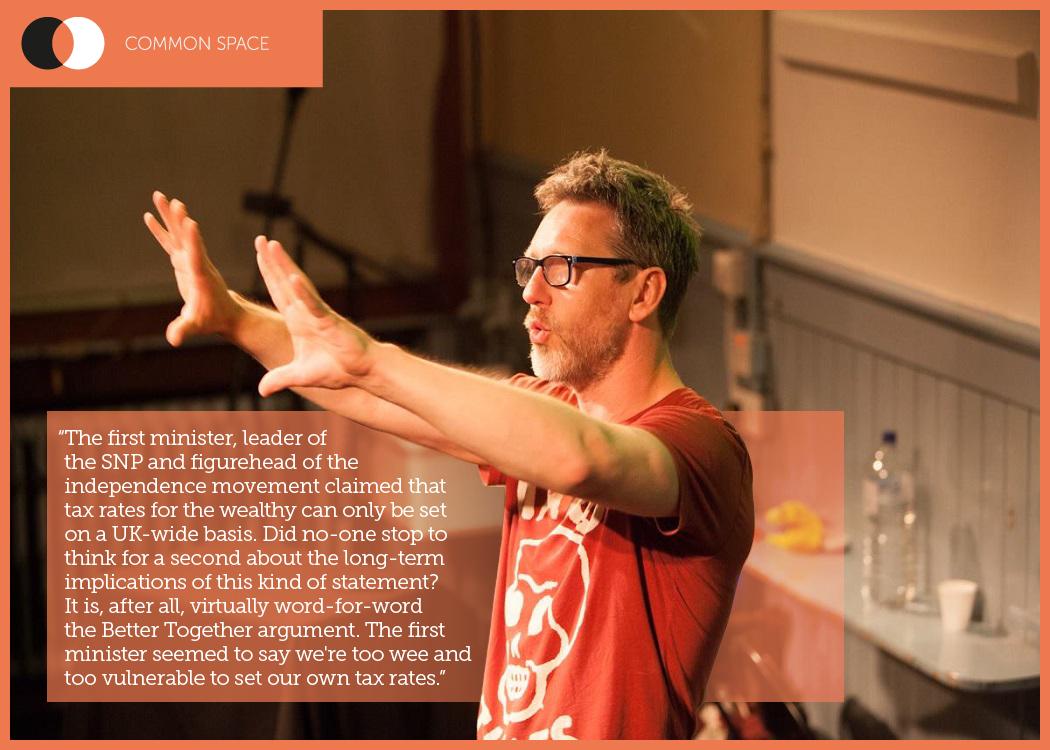 NICOLA STURGEON is a popular woman, a sure-footed leader and an accomplished media performer. Every bit as importantly, she shares with many and articulates effectively a vision of a fair and more just Scotland.

The independence movement needs Nicola Sturgeon more than it needed Alex Salmond, and everyone is very aware of it. There is no-one that could replace her as its leader. Possibly even more so, social democracy in Scotland needs her because she is going to be the first minister and remains the most promising opportunity to create a better Scotland that we’ve had since devolution.

I wish there wasn’t a but. There very much is. There are two things which have happened since the indyref which have done the most harm to the future case for independence – and what Nicola Sturgeon said this week is the one which isn’t GERS.

The first minister of Scotland, leader of the SNP and figurehead of the independence movement claimed that tax rates for the wealthy can only be set on a UK-wide basis .

The first minister of Scotland, leader of the SNP and figurehead of the independence movement claimed that tax rates for the wealthy can only be set on a UK-wide basis .

I can see how whomever sat in an office somewhere thinking up lines to defend an income tax policy which was never going to inspire party members (and looks like a U-turn) could have thought ‘this will get us through the day’.

But did no-one stop to think for a second about the long-term implications of this kind of statement? It is, after all, virtually word-for-word the Better Together argument. The first minister of Scotland seemed to say we’re too wee and too vulnerable to set our own tax rates. (That’s the SNP first minister, for goodness sake.)

Did strategists think that, after having got them through the day, this wasn’t going to end up in the Big Unionist Scrapbook Of Things To Humiliate Independence Supporters?

Too reliant on London to set our own tax rates? Seriously, was there really no other way you could have framed this decision?

Because it’s worth pointing out that when we did our tax work, we hit upon a similar problem. We very much doubt that there would be a loss of revenue (the Scottish Government data which implies this is sheer guesswork and very unconvincing). But there is a question about how much it would raise inside a British tax system designed for easy tax avoidance.

Too reliant on London to set our own tax rates? Seriously, was there really no other way you could have framed this decision?

So we proposed a taxation system which would claim a fairer share from the wealthy based on land and property ownership which couldn’t be avoided. And we framed our case based on the economic and social benefit which that system would bring.

Of course, since the SNP is sticking with council tax as is (other than asking the richest to pay an additional amount equivalent to 0.0004 per cent of Scotland’s GDP), it couldn’t frame its actions in this way.

But even so, who thought it was a good idea to lead out into battle armed only with a white flag? I predict that none of us are ever again going to be able to go into a town hall debate about independence without Nicola Sturgeon’s words being thrown at us.

What should we do? Disown her words? Agree that Scotland’s economy is actually too small to disentangle from England?

If that was the end of the problem we could perhaps forgive it as a slip – a pretty major slip, but a slip.

Did strategists think that, after having got them through the day, this wasn’t going to end up in the Big Unionist Scrapbook Of Things To Humiliate Independence Supporters?

But this is the fourth major policy announcement of the Sturgeon era and the only people who have welcomed all four of them are the Tories.

People in the SNP are seriously beginning to wonder what is going on. I understand that Iain McWhirter (hardly an enemy of the SNP) yesterday tweeted a quote from and asked people to guess whether it was from Sturgeon or George Osborne.

This should not be happening. Sitting at 60 per cent in the polls, the SNP has no need to go triangulating Tory voters. Iain Black’s wonderful research on the independence movement out today strongly suggests that it is mainly sitting at that level of support because it has inspired the strong majority of social democrats in Scotland.

I know anecdote should always be treated with a very big pinch of salt, but I know of SNP activists who say they were struggling to motivate themselves to go out and campaign last night. SNP backbenchers are not used to being kicked around by Kezia Dugdale at First Minister’s Questions. They did not look in buoyant mood in the last bout before the campaign begins.

Mandatory testing for primary school children, saving the council tax , cutting air passenger duty (70 per cent of which will go straight into the pockets of big business who take most of the flights), ruling out doing anything with tax for the next five years .

This is the fourth major policy announcement of the Sturgeon era and the only people who have welcomed all four of them are the Tories.

I understand and will take on the chin the SNP loyalist anger that I’m sure I’ll receive for highlighting these things so close to an election. It’s certainly not my aim in life.

But blaming other people for worrying about accumulating missteps won’t help anything.

It won’t help SNP activists if they become demoralised (at least those who thought they were joining a movement for national renewal and social and economic transformation). It won’t help the impression that policies are being imposed which don’t look in line with the anti-austerity stance of the party.

And it certainly won’t undo the framing of Scotland’s economy as too small and vulnerable to do things differently than they do in London.

I’m not one of the people who feels any discomfort at the SNP’s ‘two votes SNP’ message – I mean, ‘vote for us’ is hardly an unusual strategy for a political party. I do wonder which second votes the SNP thinks it is targeting, though.

I had presumed they meant ‘don’t give your second vote to the Greens or Rise’. It just seems to me that they’re designing a policy position poorly placed to entice either environmentalists or socialists. I doubt a twibbon is going to make up for it.

If Scotland is to achieve independence from where we stand now, it is going to need Sturgeon and the SNP to retain a level of trust and faith few governments manage nearly 15 years into power.

If Scotland is to achieve independence from where we stand now, it is going to need Sturgeon and the SNP to retain a level of trust and faith few governments manage nearly 15 years into power (which is when I think the next referendum will be).

And they believe in her because she exudes belief in Scotland’s strength, not its weakness, not its vulnerability, not its second-tier status.

The independence movement is behind Nicola Sturgeon. I am behind Nicola sturgeon. Even in the face of a string of disappointments, I have hope.

But now would be a very good time to get a grip.