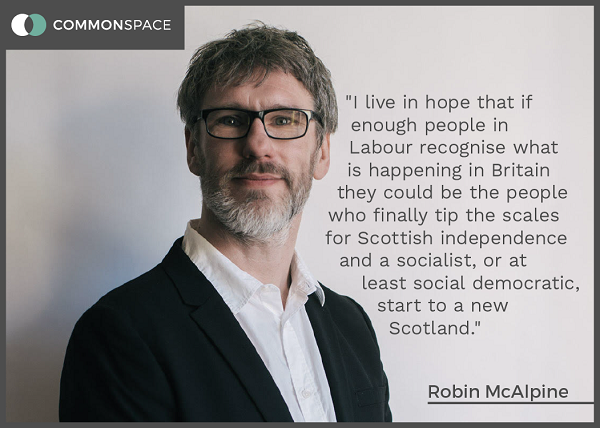 CommonSpace columnist and Common Weal director Robin McAlpine says Labour may have lost its way, but its values still matter

IT’S only last week that I was proposing that not more than one in five people in Scotland would consider voting Tory. Then came some polls at the weekend that suggested I’m underestimating and that as many as one in four Scots might be considering a Tory vote.

And with a lower turnout it could just mibby sneak up towards one in three votes cast in the General Election (though I still doubt it). Depending on how those votes are distributed, it might mean that the Tories could be looking at gaining seats, not losing the one that they have.

This polling comes at the end of two years of the Scottish media soft-balling Ruth Davidson and the entire UK media attempting the total assassination of Jeremy Corbyn. A few weeks of Theresa May barking her demands for more personal power at us might just clarify a few minds.

I can’t find any analysis of the Britain and the Scotland we have now that doesn’t begin with some terrible errors made by Labour.

But still, how the hell did we get here? Every time I’ve asked myself that question over the last week I’ve come to the same conclusion. And when I think about that conclusion, it feels the same. It feels like sitting by the hospital bed of a friend who has done some serious harm to themselves.

“Oh Labour, what have you done?”

Yet I can’t find any analysis of the Britain and the Scotland we have now that doesn’t begin with some terrible errors made by Labour.

The first was undoubtedly how fully the party sold its soul to Tony Blair, Gordon Brown and the ‘third way’ – and what use Blair then made with the soul he purchased so cheaply. Blair wanted Labour rid of its reliance on those unfashionable working classes and their representation through trade unions.

The first was undoubtedly how fully the party sold its soul to Tony Blair, Gordon Brown and the ‘third way’ – and what use Blair then made with the soul he purchased so cheaply.

But they existed on a troubling diet of insecurity, declining infrastructure and tabloid framing of news. And Ukip knew they existed. Shitty and hypocritical as it was, Ukip pretended that it cared about the working classes. Labour didn’t.

Worse still, Labour’s whole ‘third way’ thing was really just two halves of the two old ways – neoliberal economics with a commitment to socially democratic public services. To this day the New Labour set in the Guardian can see no connection between Tony Blair and Gordon Brown’s relationship with the banking industry and the financial crisis.

In fact, the New Labour apologists are delighted that the Tories made up a false claim that it was ‘too much public expenditure’ that caused the financial crisis, providing them with the perfect straw man and missing their real complicity.

For my money, Brexit is Blair’s child far more than it is David Cameron’s. The anti-EU coalition between the Tory eurosceptics and the extreme conservatives of the home counties would have remained a curiosity if Blair hadn’t handed them the north on a plate.

For my money, Brexit is Blair’s child far more than it is David Cameron’s.

And Wales. Dear god, what is happening in Wales?

Polly Toynbee can rattle off her list of 50 brilliant things New Labour did (though I think it’s rather scraping the barrel in terms of nearly 20 years of government), but until she understands that Blair entrenched and deepened an economic system that ruined people’s lives and communities, she will continue to utterly misunderstand the Britain we have today.

But just citing ‘Blair’ as the problem doesn’t quite explain what’s happening in Scotland. Here there are two other factors, one of which is too far below the radar of many commentators.

That factor is Labour in local government in Scotland. If you’re media class you will probably have limited direct contact with 50 years of Labour local government. Here’s a crash course.

In my local area, a major and very unpopular and controversial decision was made. Lots and lots of local people objected, so the Labour local authority shifted the meeting at which it was to be discussed forward to a bank holiday, didn’t notify any of those objecting and rubber stamped the proposal in a minute.

Just citing ‘Blair’ as the problem doesn’t quite explain what’s happening in Scotland. Here there are two other factors, one of which is too far below the radar of many commentators. That factor is Labour in local government in Scotland.

If you’ve not seen the contemptuous sneer of a Labour bigwig in local government intent in letting you know just precisely how powerful he is and how powerless you are, you very possibly don’t understand a large part of the broad hostility towards what had become an impenetrable Labour establishment.

Jack McConnell was not an arrogant first minister. In fact, I’d possibly argue he was the most approachable first minister we’ve had. But it was a combination of his mediocrity at Holyrood and the stultifying arrogance of his party’s position in local government that put the SNP in power in 2007.

Then Scottish Labour made its fatal mistake. Since Winnie Ewing won Hamilton for the SNP in 1967, the Labour Party hated the SNP in a way it never really hated the Scottish Tories. I had a (Labour) friend who was at a party with a former Labour minister in the summer of 2007.

That friend was utterly shocked when she was cornered by the former minister who was shouting loudly at her for saying that perhaps a period of regrouping was not a bad thing. “They’re fascist!” screamed the minister. “Actual, real fascists!”

So sure was Labour that the SNP was the real evil, the real challenge to its authority as the only moral force in Scottish politics, that within a few years it made the catastrophic decision that detoxifying the Tories was a price worth paying to squeeze the SNP out of Scottish politics.

Then Scottish Labour made its fatal mistake. Since Winnie Ewing won Hamilton for the SNP in 1967, the Labour Party hated the SNP in a way it never really hated the Scottish Tories.

I don’t think it didn’t realise that, more than any single political act in 50 years, the founding of Better Together brought the Tories in from the cold in Scottish politics. It was a heaven-sent makeover for the Tories, a party whose very name caused an involuntary curling of the lip in Scotland.

Labour realised it fine. It was just sure that it was a price worth paying. If it could squeeze the SNP out of the ‘mainstream’ then it could go back to a Scottish politics polarised between it and the Tories, entrench its hold in local government, return to power in Holyrood and eventually take Westminster, too.

I suppose it could have worked. Except by this point the female Labour friend I referenced above was a leading campaigner in her local Yes group and had joined the SNP. There she found all her other former Labour friends who left over the Iraq war – and the Greens and socialists and the artists and so on.

In fact, it seems Labour barely noticed that the social coalition which had built its power base in the 1980s had largely defected. And so its decision to tolerate the detoxification of the Tories had almost exactly the effect it hoped for.

With a single detail out of place – it was Labour which was squeezed out of the very polarisation it set up. I still struggle to really believe the polling data on how enormous is the collapse in Labour support in Scotland. Yet here we are.

Labour’s death in Scotland must not mean that the founding spirit of that party dies with it.

We’ve reached a stage where there’s little pleasure in this for me any more. I cheered the night of the 2015 General Election – great and powerful Scottish Labour was humiliated. It’s no more than it deserved.

I don’t really feel like that now. Partly, as a Scot I just don’t like to see a harmless underdog take a kicking. But also, we need the good people in Labour (there remain plenty) back to create a critical mass of people determined to change Scotland into a more progressive nation.

I live in hope that if enough people in Labour recognise what is happening in Britain they could be the people who finally tip the scales for Scottish independence and a socialist, or at least social democratic, start to a new Scotland.

If it happens, I for one will welcome them with the openest arms possible. Labour’s death in Scotland must not mean that the founding spirit of that party dies with it. I’ve bumped into the occasional SNP supporter who’s sneering contempt for the state of Labour looks a touch too much like the joy Labour councillors used to take in defeating their own electors.

A lot of people seem to think I totally love the constitutional debate. In fact, I see it as the only door which offers us a route forward. Right now, it feels like we’re all jammed in the door. We need to resolve this question or all of us who aren’t Tories will suffer.

Labour really has deserved an enormous amount of what it has received, not least for seeing a Tory revival as a price worth paying for its own factional interests. At the coming election, it will almost certainly deserve what it gets again. I’m now doubtful the ‘brand’ can survive.

If the Tories get their feet in the door, it’s a fight we may need to fight all over again. We might just need each other.