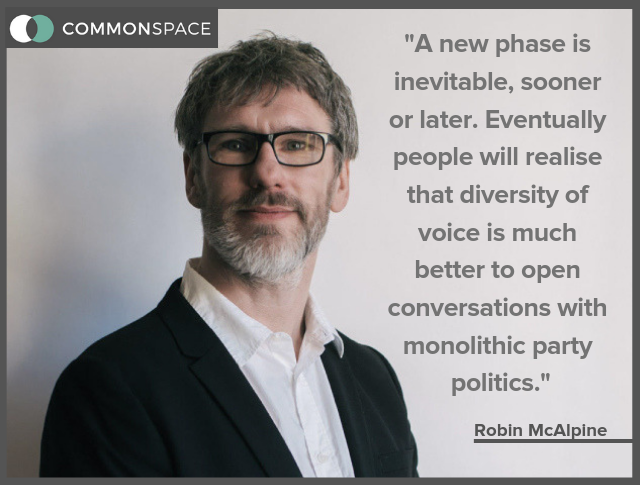 Common Weal director Robin McAlpine looks at a recent opinion poll on independence, and finds that it highlights the need for the political strategy of independence to enter a new phase

IF Angus Robertson’s poll didn’t cause nervousness in the independence movement it should have. It suggests that not only are we not winning, we’re going backwards. And if that’s right, it very strongly suggests we need to do things differently.

The Progress Scotland poll was a ‘push poll’ for media attention rather than the private polling you use to set strategy – but it was broadcasting bad news.

A heavy positive spin was put on it, suggesting people were rethinking – but this question was only asked of undecideds. The proportion of all respondents in this poll who strongly agreed with the statement ‘Brexit has changed my view on Scottish independence’ is three per cent (and some of them may have gone from Yes to No…). Add in ‘slightly agree’ and it still falls short of 11 per cent.

At face value that makes achieving a convincing pro-independence vote look like a tough ask.

I will admit that these numbers caused me some concern. Most of what I’ve seen in recent years suggested a more even voting split – give or take, a third were at the top of the pro-union scale, about a third were at the top end of the pro-indy scale and about a third fell in the range of soft No, undecided and soft Yes. Shifting the balance in the middle third was the key.

I’m afraid I don’t entirely find it hard to believe we’re losing some ground just now. I know this is hard for many people to accept, but for most of our target voters the evidence is that they simply have next to no real awareness of an independence campaign.

All they can see is Nicola Sturgeon and Iain Blackford. This means they have heard the word Brexit a lot, and the word referendum rather a lot – but use of the word independence has been sporadic and unfocused.

And although the word independence is now being used more, it’s use seems quite perfunctory, framed mainly as a response to the failure of parliamentary politics at Westminster.

This runs very much counter to what I’ve derived from our public attitude research work. The Scottish Independence Convention did a proper poll on what messages land with soft No voters. And one particular formulation landed much better than others – leading with ‘independence can’ or ‘independence will’.

More work needs to be done but my conclusion is that we make much more ground when we unpack independence as being about something, for something, about how to achieve something.

And yet everything in the current strategy seems to be about taking purpose out of independence. We’re no longer to aspire to a Nordic nation, we’ve to promise nothing specific and offer nothing specific. That’s all for later. It’s back to soft independence – a technical solution to Scottish politicians not being shown sufficient respect at Westminster.

Also damagingly, most people only see one messenger – and that messenger is a political party. This is particularly worrying because the 20 per cent target No voters are especially resistant to party politics.

It is important to understand that this is not a dig at the SNP – this group doesn’t respond particularly well to any political party. The SNP will always be the political leadership of the independence movement and we need a strong SNP government. Nothing can be done without the SNP’s many wonderful activists.

But party political badging is a turn-off for many. We need to be able to talk with a different accent.

Because at the moment our biggest barrier is getting the conversations started, and there is clear evidence that political branding is more likely to close down conversations than open them up.

There is a clear solution to this – we need to focus on 20 per cent of the electorate (though this will also shore up our existing vote). We need to open conversations with them. And to do that we need to speak without a party political accent – and make independence firmly about something, about a better future.

I’ve been over to Catalonia a fair bit recently and am just back from a joint Catalan/Scots event in the European Parliament. Its important to know that what is happening in Catalonia is being driven not so much by the political parties as by civic organisations (the ANC and Omnium in particular).

They do not frame Catalan independence in terms of parliamentary or party politics. They talk directly to people. And they’ve been very successful.

We had this. Phase one of the independence movement is what I called the Butterfly Rebellion. It was lots of small, self organised campaigns which exploded during the indyref. This campaign was absolutely stuffed with vision and hope and substance – and diversity.

We should have built on this. We should have created permanent civic structures which would have had a very powerful impact on the national debate. But it has always seemed to me that it was met with suspicion by the current SNP leadership. As a result many of the foundations of the 2014 campaign were dismantled or fragmented and those of us who still exist have never been embraced.

Instead we moved into the Imperial Phase. One party dominated the movement, and one politician took control of the party. The only reason there is any hinterland left is because of the sheer willpower of the grassroots.

But the Imperial Phase has failed. It has moulded itself into the shape of the British establishment in the belief that safe is sound, familiarity breeds respect and the unbelievers will be converted on the basis of Great Leaders.

A new phase is inevitable, sooner or later. Eventually people will realise that diversity of voice is much better to open conversations with No voters than monolithic party politics. We’ll remind ourselves that only when we link independence to people’s hopes for a better future will we get their attention.

Phase Three of the independence movement will be civic. It is not clear to me that we will regain momentum until it is properly born. I can’t see what more of the same will achieve.

But change is coming. A Scottish ANC, a Scottish Omnium, is round the corner. We’re only weeks away from the launch of the civic campaign organisation being founded by the SIC. It is a new voice with a new accent and it is crucial.

But after the shock passed and I looked calmly at everything I have seen, I came back round. The task remains what it has always been – talking to the one in five Scots we need to turn round (a lot of them are young).

We can do this. But it won’t happen until we accept that what we’ve been doing hasn’t worked. Phase Three will be civic. And it is Phase Three that will bring independence. It can’t come fast enough.