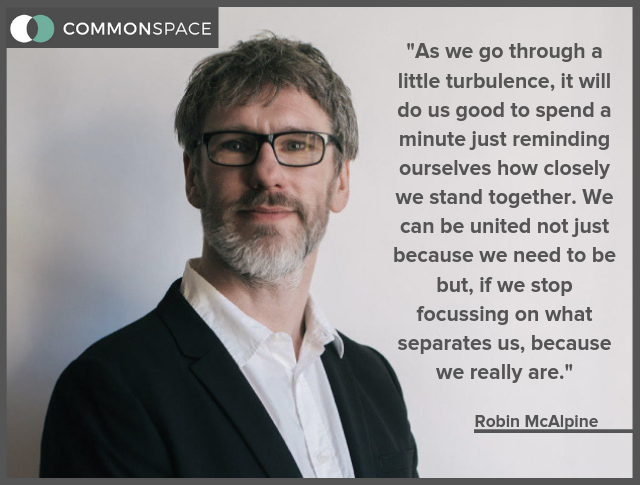 I’M WRITING this on the plane coming back from a week-long Erasmus-funded training camp in the Catalan hills (hurray the European Union!). It’s been vegan food without coffee or alcohol, meditation every morning and a day of complete silence alone up the top of a hill.

So I’m going to write this while I retain my positive mind frame and general Zen and before I return to my default state of barely holding it together because of the sheer WhatTheFuckIsGoingOn-ness of it all.

And perhaps the best way for those of us in the independence movement to de-WhatTheFuckIsGoingOn-ify the current situation is to take a step back and just remind ourselves not what divides us but what unites us.

I think this will be particularly fruitful because, despite the current friction, I continue to believe that we are in an amazing position – we are genuinely diverse but there really is an enormous amount of overlap in what we believe.

So let me start with independence itself. I think I can say with confidence that the vast majority of the movement would like to see the fastest possible progress to an independent Scotland based on a clear democratic mandate.

I think that the vast majority of that vast majority want to do so by first substantially disentangling ourselves from the British state but then maintaining the most positive comradely relationship possible with the other nations in the British isles.

I acknowledge that there is a group of people who would favour going slower or remaining more integrated but I don’t think there are many of them and most are probably OK with the majority position. (I have no time for the tiny fringe determined to sound anti-English.)

I think it is also reasonable to accept that, on the whole, the very big bulk of the independence movement is somewhere on the broadly left side of the political spectrum. Yes, that encompasses quite a lot, from people who just don’t think a country like Scotland should need foodbanks to people with a more committed, radical view.

And yes, there are few people with a more explicitly centrist position and a smaller number who are specifically right of centre. (There are many who wouldn’t immediately position themselves on a left-right spectrum at all but who seem to me to hold broadly centre left views on a lot of issues).

This isn’t a case for ignoring the centrists and those on the right and we need to make sure there is space for them. Nor does it provide an infallible guide on how to tackle each individual question. But it is a starting point.

There are areas of justice where I think there is a strong consensus; moving on from Britain’s horrible attitude to social security and poverty, support for universal and non-marketised public services, a commitment to environmental action, participative democratic principles, a more balanced economy with less worker exploitation…

Some social justice areas bring a bit more dissent but even still on issues like better regulation of the financial services sector and a simpler, fairer tax system there is strong majority support.

I know that these aren’t first priorities for everyone and some would say ‘that’s for after independence’ – but of those people I don’t know many who don’t actually want to DO this after independence. It’s about priority, not belief.

Likewise there is definitely some dissent from the strong anti-nuclear weapons position of the independence movement (although some of that comes from a ‘pragmatic bargaining chip’ position rather than being pro-nukes), but on the whole getting Trident out of Scotland is a strong majority position.

I think we’re on even safer ground when it comes to foreign policy and militarism – I’ve come across very few people who want to keep getting involved in harmful oversees wars or keep propping up nasty dictators after we’re independent. And from there the vision of playing a really positive role in global coalitions is widely shared.

A more contentious issue is currency. However, while I may be wrong about this, I think that is largely because of the events of the last year. I still keep coming back to the many times I’ve seen a show of hands in a big audience for what currency option people want and the overwhelming majority of hands going up for our own currency. I acknowledge I’ve been an antagonist on this subject, but I do still think it’s true.

Slightly more generally I think that (though not without dissent) most people do want to hear an inspirational and visionary pitch for the future. There are big issues like Universal Basis Income, major land reform and new banking, housing and energy systems which are perhaps not things everyone wants to do straight away but which are possibilities they like to project as perhaps part of our independent future.

And I think now there’s a pretty strong view among almost everyone that Scottish culture and history should be something we support, develop and promote with pride at home and abroad.

OK, what about the harder issues? There is clearly a split on the question of ‘identity politics’ and probably in particular the Trans issue. And to be honest I think that will be on-going – around the world many people generally are in an ongoing debate about what all this means for them personally and pretending that this debate has been ‘resolved’ isn’t really honest.

I think that there is also a pretty strong consensus on the IPCC climate change agenda, other than the thorny question of oil. This causes problems between the environmentally-focussed part of the movement and those in the north east of the country where the economy still revolves around oil. I think this is an issue we need to think about more deeply.

Then there is a kind of divide in the movement which is in some ways the most fundamental and often most divisive – but which I don’t actually think is really there at all. It’s about tone and framing and might be (clumsily) thought of in terms of populism or anti-populism.

Perhaps more than anything else there have been personal fights over what constitutes an aggressive tone, whether the framing should contain ‘an enemy’ or be ‘civic’ and whether certain views are reactionary; the Trans issue has sometimes become a bit of a proxy for this.

I may be wrong about this and of course in a movement as big as ours (with so many first-time-to-politics activists) there are some people who have expressed views that make me uncomfortable, but I think this has been exaggerated in people’s minds because of their personal conflicts (bloody Twitter).

I just don’t think there is a particularly significant reactionary element in the movement and what you might call the ‘sovereigntists’ (independence before politics) aren’t an anti-immigration, anti-welfare state grouping like you find in the Brexit constituency. I think it’s about focus and degree rather than division and disagreement.

But that does take us to a final divide and one we should stop pretending isn’t there; Europe. Something like one in three independence supporters voted Leave in the Brexit referendum. I genuinely think that it has been unfair and a mistake to write them out of the story of the independence movement.

That’s why I think we should take an initial EEA/EFTA position but be a little slower to commit to full EU membership. I know it’s a little bit of a fudge, but since this actually reflects the technical position anyway (you need to join the EEA before joining the EU) it is a pretty handy and legitimate fudge.

When you look at it from this perspective, we’re incredibly lucky. Yes we have a couple of fundamental disagreements on some issues like identity politics and yes there are clear differences in the tone people prefer.

And yes oil and Europe do cause us some slightly tricky divisions. But in the scheme of things these are remarkably small differences for a movement of our size.

Genuinely, I can’t think of all that many social movements which are as big as we are on an issue as broad and fundamental as independence but have so much in common and comparatively little that divides us.

As we go through a little turbulence (literally as I am writing this, and figuratively from what I hear about the events I’m returning to), it will do us good to spend a minute just reminding ourselves how closely we stand together. If we can remember this it gives us a wonderfully solid platform to help us move forward and a real salve to the wounds that have emerged.

We can be united not just because we need to be but, if we stop focussing on what separates us, because we really are.

CommonSpace is wholly reliant on small, regular donations from you: our readers. Become a CommonSpace donor today.