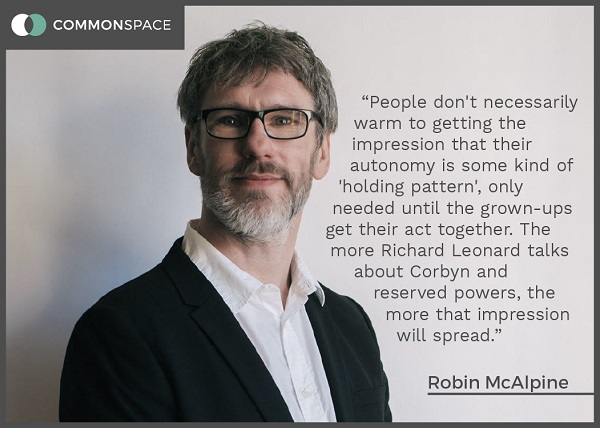 AND SO another new dawn begins for Scottish Labour. Let me explore a couple of substantial issues by beginning with a more trivial one.

First, as a west-of-Scotland male I’m contractually obliged to disown the view that football matters in any way. It’s also true that I have a very limited personal interest in the sporting allegiances of those who lead us.

On the other hand, I’m a sociologist and I also know that it’s simply not true that important signifiers such as sporting allegiance are irrelevant. They’re absolutely not.

So you can tell me that the fact the leader of the Scottish Labour party will be cheering on Scotland’s ‘auld enemy’ (even on occasions where that means crushing the hopes and dreams of a large proportion of the Scottish population) will have no impact at all.

But answer me this; Richard Leonard is at a Calcutta Cup match with a few weeks to go before a Scottish election. Scotland is leading by three points with two minutes to go when England scores a try against the run of play and Scotland is defeated.

The TV cameras cut to the Labour leader in the stand. What is the least damaging impression he can give? Gloating? Pity? Condescension? Hypocrisy?

I mean, some commentators believe that Ed Miliband lost an election in part because of a photo of him eating a bacon piece (which is wrong because it was the excruciating video footage of him and Ed Balls trying to buy a sausage roll. People think Kennedy got to be president ‘cos Nixon sweated on TV.

Of course, it’s not fatal. But the Scottish media is in full wish fulfilment mode when it tells us that this was “met with an overwhelmingly positive reaction” (according to the Scotsman). The confirmation bias of the hacks (along with Nicola Sturgeon’s apparent drive to always agree with them) does not represent all of Scotland. Even my non-indy friends seem a long way short of chuffed.

So yes, this is fairly minor – but no, its not nothing.

And this is my first point. For what seems like an awful long time now, Scotland’s media have been telling us that the big recovery for Labour is round the corner. I think people are starting to forget the certainty which accompanied the arrival of the utterly brilliant Jim Murphy.

Likewise, the media is always telling Scotland that we’re not allowed to behave like any other country, ever. Let me just be clear about this; I really cannot think of a single other nation state anywhere else in the world where a leader not backing the national team would be considered feasible.

For what seems like an awful long time now, Scotland’s media have been telling us that the big recovery for Labour is round the corner.

A British PM cheering on Germany against England? A German chancellor celebrating a French win over Germany? I suspect that a US president who supported, say, Mexico over the US (assuming the US played any sport that any other country played) would need an enhanced security detail.

Remember Scotland: pride and loyalty are not for the likes of you. But my guess is that on both counts – manufacturing political swings and suppressing natural national cultural identifiers – they will fail.

But my second point is that coming out with this admission does reveal something about Richard; he is genuinely an honest, decent guy. I’ve disagreed with things that he’s written or said over the years, but I’ve never doubted his honesty or how he holds his principles.

He is most certainly not a Jim Murphy character, ready to try on whatever costume he thinks he has to to get through the next half hour. Not sneaky or devious or vain, he holds his beliefs deeply.

There has been some increasing doubt about what exactly the Scottish Government’s principles and priorities are, and the reaction of supporters has generally been to shout “look over there – that Labour person is a chancer and you can trust us more than you can trust him/her”.

Despite his general decency, I’ve not really known Richard Leonard to be desperately strong on presentation or public communication. He’s just not that media-savvy.

Over recent years there have been varying degrees of truth to this, but my guess is that this isn’t going to work very well with Richard Leonard. The SNP may have to adapt to this rapidly.

However, despite his general decency, I’ve not really known Richard to be desperately strong on presentation or public communication. He’s just not that media-savvy.

Whoever told him that it was a good idea as his first intervention in a domestic issue to roll out a somewhat Forest Gump-like “it was me what saved BiFab” strategy needs to be sidelined. There is plenty he’ll have to attack the government over; trying to land a punch when most people know the government did a pretty decent job on this one is utterly amateurish.

A more cynical (and also media savvy) person might just have decided to fudge sporting allegiance or convert (Blair would have). It’s not beyond him – a life-long anti-nuclear campaigner, he managed to work in a pro-Trident trade union for many years. But he didn’t.

So another point is that under this leadership, I don’t think Scottish Labour can revive itself based on personality or slick presentation. He’s most certainly no Tony Blair or Bernie Sanders. Scotland isn’t going to be ‘charisma-ed’ into Labour’s arms.

Which means rather a lot of weight is likely to be put on the substance of his leadership era, and that is a little more complicated than I think a lot of commentators are picking up yet.

Which means rather a lot of weight is likely to be put on the substance of his leadership era, and that is a little more complicated than I think a lot of commentators are picking up yet.

I suspect that we’ll find that Scottish Labour develops a slightly different narrative relationship with the rest of the UK. Richard Leonard is no Scottish Labour Action type. I’ve never thought of him as a natural devolutionist. He always gave me the impression that devolution was a utilitarian response to being in a UK which wasn’t yet ready for socialism.

If you listen with any degree of care to what he says about policy solutions, a remarkable proportion of them relate to reserved powers. But – crucially – he’s not calling for them to be devolved to Scotland.

I think this is because, with all the best intentions, Richard does see Scotland as a second-order nation to the UK. He comes from a political tradition of ‘socialism in one country’ and in that framing Scotland may not be too poor and it certainly isn’t too stupid, but I think he holds the honest view that it may well be too wee.

He has published research a number of times (most recently in the book from the Red Paper Collective but in a previous life I published two of them) which showed that Scotland has a very small proportion of Scottish-owned companies and very few company headquarters.

If you listen to what he says about policy solutions, a remarkable proportion of them relate to reserved powers. But – crucially – he’s not calling for them to be devolved to Scotland.

For reasons that always escaped me, he thought that this was evidence in favour of having Scotland’s economy run from London, not against it.

And all of this comes from the fact that he has a pretty ‘1970s’ view of these things – big powerful states are the only way to implement socialism because ‘the capitalist markets’ will ‘pick off and punish’ smaller states that try it.

Except the states which have come closest to socialism in the developed world are mostly small, and all the evidence is that ‘capitalism’ generally focuses its efforts on the big states.

The point is that he really, fundamentally believes this and that seems, to me, a shift in how Scottish Labour thinks.

It is a point to note that there is at least a risk that this doesn’t go down well. He needs to win over a lot of people who were attracted by independence. It may not be wise to give the impression that the Scottish Parliament is just temporary protection from the Tories until the real aim of a ‘socialist Westminster’ is achieved, at which point everything important will be done there.

It may not be wise to give the impression that the Scottish Parliament is just temporary protection from the Tories until the real aim of a ‘socialist Westminster’ is achieved.

People don’t necessarily warm to getting the impression that their autonomy is some kind of ‘holding pattern’, only needed until the grown-ups get their act together. The more he talks about Corbyn and reserved powers, the more that impression will spread.

And that’s my last point – I’m not sure this can work. It’s possible that people will think ‘what we really need is Labour at Holyrood and Labour at Westminster and that’s the job done’, that Scotland reduced to a footsoldier in Corbyn’s revolution is plenty.

But they might well think ‘hold on, the guy doesn’t even back Scotland over England on the football field, now I’m not sure he backs us over them in the corridors of power’.

Fair? Probably not. But I’m from Scotland. Let me tell you two things which definitely aren’t ‘fair’. Football and politics.