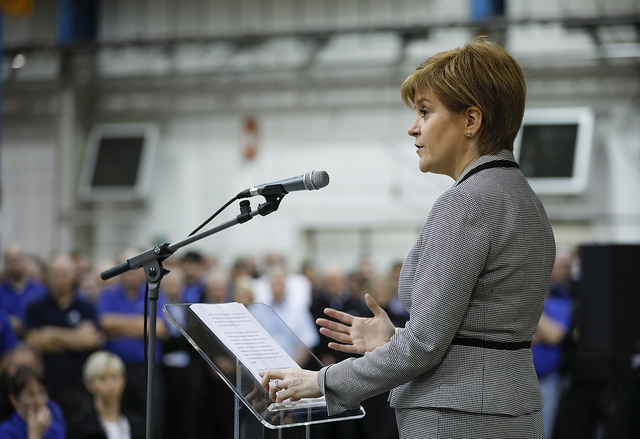 THERE’S an abiding question that has been in my thoughts since the launch of the Scottish Government’s programme for government on Tuesday; where would we be now if this agenda had been set out before or soon after the 2015 General Election victory rather than three years into the new administration?

Because make no mistake – what we heard was undoubtedly marked change both in direction and in terms of signals of intent.

The intent of those first three years seemed to be to demonstrate competence of management. But that was quite at odds with the post-referendum mood, and perhaps especially with the euphoric mood post-2015 election.

If there is such a thing as a ‘public mood’, it seemed to be shouting ‘do something!’.

That’s what this new agenda appears to be trying to achieve – to do something. If ‘ambition’ seemed to be losing out to ‘caution’, then ambition is clearly making a fight-back here.

Tuesday’s announcement now means that the Scottish Government has two serious and substantial ‘tent-pole’ initiatives. Both are potentially generation-defining.

If they get the Scottish National Investment Bank right, it could change the economic landscape in Scotland. This involves making a clear decision to pursue a development bank model and not a commercial bank model.

The difference is fairly straightforward and is all about mission. If the mission is to generate profit or ‘ensure returns for investment’, it is likely to replicate the risk-averse, short-term nature of the existing banking landscape.

But if its mission is development for the public good, it changes everything. It creates a much more efficient funding mechanism for financing public infrastructure, replacing the PFI/PPP model which is still the basis of a lot of infrastructure financing.

It creates opportunities for entirely new activity which it is hard to finance under existing circumstances. For example, funding large-volume public housebuilding becomes much, much easier if there is the opportunity of ‘public good’ financing options like 20-year borrowing periods, to be paid off in rents – potentially removing the capital costs of public house building.

And high-value start-ups and expanding larger enterprises can get access to borrowing with much more confidence – because the lending will be mission-driven to protect their long-term interests rather than the short-term interests of the lender.

This must of course be balanced by prudent financial management, both for sustainability and to make capitalising the bank feasible (pension funds and the like want safe and reliable returns, which a development bank is in a good place to deliver – but of course they do want market-appropriate returns as well).

But if this is done right, SNIB would not be an enhancement of our existing economy but a potential bridge from here to a new kind of economy.

The other big transformational project is in childcare. As a parent who’s child is in the pilot for extended hours, there is no doubt that this is a very big step forward for those with childcare responsibility (more often than not women) who want to get back into work.

There’s also lots of evidence that high-quality structured play environments are really effective in child development. If done right, this can have substantial health and education benefits for an entire generation, as has been seen in Finland.

There is a risk that the Scottish Government, having got a deservedly warm welcome to much of this week’s announcement, thinks that that’s it relaunched, renewed, problem solved.

But I can also tell you that it’s almost impossible to put twice as many children in the same space and without a doubling of staff numbers (a morning and an afternoon cohort have been combined into one all-day cohort) without any decline in quality.

And without investment in staff, it also remains a comparatively low-pay employment option – and is of course dominated by women. That’s hardly transformational.

The childcare proposals should really have been the defining policy of this government over the last three years. But it’s been strangely quiet – and I think fears over whether it was being properly funded have contributed to this.

So the announcement of more investment in infrastructure and staff development in childcare is very welcome indeed. It may just give the confidence to really promote and own this policy as a signature achievement.

Of course, between these tent-polls is a little bit more of a mixed bag. There are some important and substantial things that are just in the ‘let’s have a look at this’ stage – notably Land Value Tax and Universal Basic Income.

I’m really delighted they’re on the agenda, but right now a lot of the challenge of renewing this government is making it relevant to the real-world experience of voters. Until these become any kind of reality (and the Scottish Parliament doesn’t have the powers to implement a Basic Income unilaterally), they’re not going to reach the public.

I am celebrating – genuinely, not the way people do in press releases. I just can’t tell you how important I think it is that all of this is delivered promptly.

The two transport initiatives on cycling and ‘going electric’ are very welcome. Good cycling infrastructure is the kind of thing that does register with many people.

And setting the ambition for going all-electric in transport is brilliant. But I can’t stress how essential it is that this doesn’t become a ‘we announce the target and let the market respond’ approach. We won’t even nearly get this transition right if we don’t take substantial national action to shape what results.

There are other good things – I suspect the female sanitary products initiative will be well received and some of the environmental intentions are good. I am personally delighted to see more criminal justice focus on a presumption against jail.

But I don’t want to get too carried away. There remain problems. I still struggle to find anything very positive to say about the education agenda. It feels too much like the government is trapped in a policy it blurted out before properly thinking it through.

There are big areas where caution still seems to be the order of the day. Unless everything I’m hearing about local democracy is wrong, it looks like this won’t address ‘structural’ issues.

But all democracy is structural – it can’t be properly extended using the structures we have. Decentralising power from flawed but democratic local authorities to local voluntary groups is way too close to the David Cameron ‘Big Society’ dream. It could actually end up being anti-democratic.

READ MORE: Here’s how Scotland is reacting to the new Programme for Government

There are a number of areas where the thinking up until now has been somewhat on the minimalist side. Common Weal is closely involved in coalitions looking at a number of bills which are working their way through the system. Up until now the mood music has been in the key of caution rather than ambition.

And there are some important issues I just don’t think are being tackled in a serious manner yet. The housing/town centres/place-making issue sticks out a mile. Fifty thousand private knock-them-up, sell-them-off houses at a bit of a discount is no serious solution to anything.

But perhaps it is unfair to judge the Scottish Government on the basis of what a brilliant and comprehensive programme would look like. After all, there hasn’t been one of those in Britain in my lifetime.

And wherever the flaws lie, for now, this feels like a substantial change. It certainly brought a smile to my face – and they’ve been rare of late, at least in my professional life.

But there is one crucial context which I think could be absolutely fundamental – and that’s that if you’re smiling too, then you’re weird.

Not weird for being enthusiastic, but definitely atypical. It probably means you could name at least half of of the Cabinet. That’s not normal. I’m working with a number of people on a substantial piece of public opinion research and it’s hard to get some of the early findings out of my mind.

In the post-indyref, post-Brexit, post-Trump environment, only the most committed are still listening closely to what politicians are saying. Because when they do listen, they get bewildered. Each side states opposites with equal certainty, equal plausibility, the same amount of ‘facts and figures’ to back up their argument, the same lexicon to describe opposite ideas.

People are switching off. It doesn’t mean they’ve become less interested in their society, but they’re reverting to a sense of ‘lived experience’ to assess the merit in the claim and counter-claim.

Tell them that Brexit is an economic disaster and they shrug. But if they start to feel negative impacts in their own lives (and they believe the cause is Brexit), they’ll believe you.

There is a risk that the Scottish Government, having got a deservedly warm welcome to much of this week’s announcement, thinks that that’s it relaunched, renewed, problem solved.

Certainly the government now has a firmer footing at First Minister’s Questions if challenged on lack of ambition and day job. But there are only four years to the next Scottish elections – and, depending on circumstances, possibly even less until an independence referendum.

If this programme hasn’t moved out of the design phase and – meaningfully – into the lives of ordinary voters, there remains a real risk that the SNP won’t be rewarded for it.

(And this week I think I finally concluded that Scotland’s media is fundamentally broken. When a supposedly serious newspaper like the Herald can’t squeeze a word about a major announcement like a national investment bank onto its front page, we might as well be with the Beano.)

It is such a shame this didn’t begin three years ago. If it had, we might well have found ourselves in a quite different place. This could have been a programme for government where, having had a couple of real successes, the government was emboldened to press on with even more ambition.

So I am celebrating – genuinely, not the way people do in press releases. I just can’t tell you how important I think it is that all of this is delivered promptly, effectively, and with all the focus being on what it means for the lives of ordinary people.

It really may not be hyperbole to say that the direction of Scotland’s future could depend on it.